Derek Lam was inspired by a young, wild child Mick Jagger with Anita Pallenberg and friends in a grand estate. 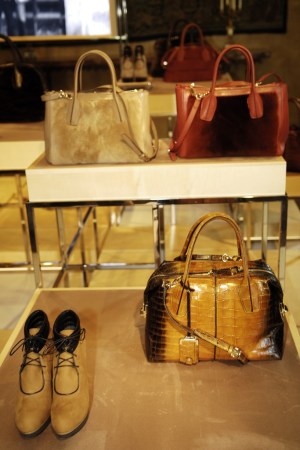 A young, wild child Mick Jagger with Anita Pallenberg and friends in a grand estate. It’s a difficult visual to imagine in the refined world of Tod’s, but that’s exactly what Derek Lam had in mind for fall. “I found a picture of him taking a photo of his posse, lounging in a glamorous house as if they were squatters,” he said during the Tod’s presentation. “It was a very masculine-feminine look, which then permeated into more classic pieces here.” Lam amped up his use of leather outerwear and executed details with a subtle hand, such as in a white suede coat that was bonded with a wool merino knit for a richer feel. The lineup also featured several shiny shearling coats, including patent leather green and gold metallic ones with a slight rock ’n’ roll feel, while a leopard-print fur top teamed with satin pants added an elegant touch.

The accessories were equally strong. Lam offered updates of Tod’s “D” bag in new luxurious skin combinations, including leather with astrakhan or crocodile, and he reintroduced the “Miky” bag in new soft, pebbled leather versions. The “Aspen” shoe was done on a high platform heel with a visible leather sole, shown in deep hues from green and burgundy to burnt orange and red, or as Lam put it, “tapestry colors.”