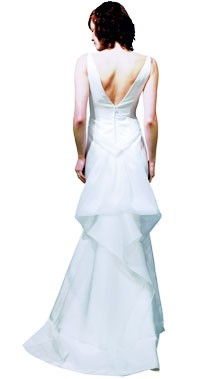 NEW YORK — Brides-to-be aren’t always the easiest people to please, but some designers are doing just that and building their businesses.

The $32 billion bridal industry is better known for gowns than big names — with the exception of Vera Wang and the late Priscilla Kidder, the force behind Priscilla of Boston, who died last year. Here’s a look at the designers behind seven companies.

Amsale Aberra, president and creative director at Amsale
Background: Seventeen years have passed since Aberra started designing bridal gowns. Shortly after her 1986 wedding, she decided to give up her post as a design assistant at Harvé Benard. “I had a hard time designing my own dress,’’ she said. “I kept shifting between high fashion and traditional. Before that, I didn’t have any interest in bridal.”
Her Brides: Prefer something clean and understated, but modern. They like simplicity, know what they want and use her accessories.
Wholesale Prices: $1,250 to $5,000.
Changing Attitudes: Brides are more savvy and seem to be more educated than before. They take a little bit longer. They like to see different things.
Trying Times: “We are in the business of high customer service,’’ she said. “It’s critical. For that reason, we do our production in the U.S. and need to be very organized. My husband, Neil Brown, vice president and chief operating officer, has a Harvard MBA and I’m much more old-world handmade. At times, that’s difficult, but it’s also our style.”
What’s Next: Design more bridesmaid dresses that double as eveningwear. She will continue to use her Madison Avenue store to sell made-to-order dresses and eveningwear. Footwear’s coming in the next couple of years.

Anne Barge, owner and president of the company bearing her name
Background: Fresh out of college in 1969, she trained under Jim Hjelm at Priscilla of Boston. Later, she ran her own bridal store in Atlanta, before moving on to oversee Saks Fifth Avenue’s bridal salons. In 1997, Barge teamed with Richard Branson to launch Virgin Bride. Ads were not needed, since Branson shaved his legs and wore a wedding gown on the runway at the company’s launch event. In 1999, Barge opened her own wholesale business.
Her Brides: “Like real classic dresses with draped skirts, roses and ribbons,” she said.
Wholesale Prices: $2,500 to $4,500.
Changing Attitudes: “My generation raised a generation of girls who don’t want to look like anyone else. If it’s been advertised, that’s the kiss of death,” she said. In addition, 25 percent of her bridal sales are for destination weddings. “In a lot of cases, the wedding is less expensive that way because the guest list is smaller. My theory is, if you don’t have to wear pantyhose, you’re not stressed.”
Trying Times: “Girls are really educated and they know good fabrics,’’ Barge said. “Before, we could run a dress for 10 years if it was really good. But now, they don’t want it to have been seen.”
What’s Next: More lightweight styles, even for big dresses. Plugging the company’s new eveningwear.

Francesca Pitera, head designer of Jim Hjelm
Background: After nine years at St. John Knits, Pitera and her husband relocated to the East Coast where she started working at Jim Hjelm in June.
Her Brides: “They have great taste but financially, they can’t afford high-end dresses,” Pitera said.
Wholesale Prices: $700 to about $1,300.
Changing Attitudes: “A lot of girls out there want stylish silhouettes,’’ she said. “They want a little bit of embellishment but not overkill. They like clean and classic but they want fresher-looking things with a twist. They want eveningwear dresses that aren’t so bride-like.”
Trying Times: “Designing my own wedding gown would have been too intense. I was already doing my bridesmaid dresses, leaving St. John’s after a long time and getting ready to move,’’ she said. “I wore a Badgley Mischka strapless taffeta dress. I felt amazing in it, and thought I would love to do this for a living.”
What’s Next: The collection has expanded to 17 styles from 12 with a wider price range than in seasons past.

Maggie Norris, designer of Ulla-Maija
Background: After 14 years at Ralph Lauren, she joined Ulla-Maija in 2000. “Bridal offers a designer an opportunity to delve into fantasy,” said Norris, who also does a signature line of customized clothes on her own.
Her Brides: “She is someone who is interested in style,’’ Norris said. “When she walks in, we ask what is her movie about because she is the star of the movie.”
Wholesale Prices: $2,000 to $8,000.
Changing Attitudes: “Not everything is so typically bridal anymore,’’ she said. “There’s been innovation with new fabrics [and] silhouettes, and we’re using embroidery in a different way to push the envelope.”
Trying Times: “We do customized dresses so each client has her own needs. If someone has a size 6 top and a size 10 bottom, we’re not going to take a 10 from the factory and size it down. Meeting with brides, we see all kinds of figures. We have to make each one look beautiful for one of the most important days of their lives.”
What’s Next: Considering Norris wore a Chanel suit for her wedding 14 years ago, it’s logical she would introduce separates for Ulla-Maija. Organza blouses and skirts, a lace coat and a shrug. “It shows what’s happening with fashion can relate to bridal.”

Angel Sanchez, designer and chief executive officer of the firm bearing his name
Background: The designer started making customized bridal dresses in 1989 in his homeland of Venezuela. In 1998, he designed his first bridal collection. Eveningwear is a key portion of his business because Sanchez didn’t want to only be known for bridal.
His Brides: “They like a little fashion,” he said.
Wholesale Prices: $1,800 to $3,000.
Changing Attitudes: “Women are more fashion-oriented and are not too traditional. They look in magazines and then they go to stores.”
Trying Times: “It’s not easy to do a real wedding dress for a 58-year-old woman,” said Sanchez, but a customer is a customer. The designer staged his first runway show in February as part of 7th on Sixth.
What’s Next: Sanchez has launched a pale-colored fur collection to coordinate with his bridal and eveningwear collections. The company is broadening its reach beyond the U.S., Mexico and Venezuela to Brazil and Japan.

Rani Totman, designer and president of St. Pucchi
Background: In 1983, the then-Bangkok-based designer agreed to show her customized special-occasion and ready-to-wear collections at a friend’s charity event in Dallas. A pink wedding gown, the only bridal piece of the 200 outfits Totman took, was shown and “bridal just took over my life,” she said. In 1985, she relocated to Los Angeles and opened her own bridal business. The company owns a factory in Thailand, where 180 people produce 300 bridal gowns each month.
Her Brides: They like lilac, butterscotch and ivory. Lisa Kudrow wore lavender for her wedding on NBC’s “Friends.” “How many brides look good in white? It’s a difficult color to wear,” said Totman.
Wholesale Prices: The Sposa collection starts at $2,000 and St. Pucchi’s high-end line tops out at $12,000.
Changing Attitudes: Seventy-five percent of women marry twice, and “they spend a lot more” the second time around, she said.
Trying Times: One bride requested an embroidered matching dress for her chihuahua — a $2,000 indulgence.
What’s Next: Launched eveningwear during Los Angeles Fashion Week and is looking for a second store in Los Angeles near Rodeo Drive.

Ursula Hegewisch, co-designer and co-owner of Wearkstatt
Background: After studying costume history at the Art Institute of Chicago, the designer planned to work in a museum. That changed when she met her future husband, Jonas Hegewisch, a Fashion Institute of Technology graduate, working at Patricia Klein. He was eager to start his own business. Wearkstatt focused on contemporary bridal dresses — then a relatively uncrowded market. The couple share design duties and ownership. The name refers to the German word for workshop and is a nod to Wiener Werkstätte, the design movement led by Josef Hoffman and Koloman Mose in Vienna in 1903.
Her Brides: “They’re not dramatic,’’ she said. “They like things a little more subtle and appreciate architectural dresses.”
Wholesale Prices: $1,300 to $2,000.
Changing Attitudes: “They’re spending more time looking at dresses. When you offer people so many choices, it’s a little confusing. When we started, people wanted to be more experimental. They aren’t quite so individualistic.”
Trying Times: The sublet of its SoHo store to a furniture company in 2001 to focus on the wholesale business, which now generates almost 1,000 units in sales annually.
What’s Next: The couple plans to introduce men’s wear with a twist next year.