Toit Volant's brand of versatile, wearable and accessibly priced sportswear, one of L.A.’s most prevalent genres, was shown to appealing effect on 10 models. 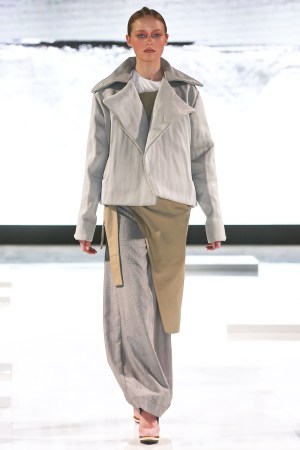 Los Angeles-based designer Alnea Farahbella launched Toit Volant in 2013. Her brand of versatile, wearable and accessibly priced sportswear, one of L.A.’s most prevalent genres, was shown to appealing effect on 10 models last Friday, who marched halfway down the runway before climbing onto white cubes, after which guests were invited to approach and take their own photos.

The utilitarian-style cotton shirts, dresses and coats, many with apron or overall details, were juxtaposed with some biker-jacket lapels, fluid bell sleeves and ruffled necklines, a nod to Farahbella’s own day-to-day life, spent in her pattern-making room, riding motorbikes or getting dressed up to walk her dog. Wisely, the collection was edited down to these 10 key looks and presented in a simple, straightforward manner that seemed appropriate for her small contemporary line. If more similar companies took note, everyone could benefit from these types of lines being shown in a fashion week format for a broader audience, in addition to on-the-rack displays at trade shows.

The designer spent a decade on the East Coast and abroad, an as instructor at the Pratt Institute and the MFA design studio manager at the New School’s Parsons School of Design, both in New York City, and a teacher at Raffles Institute Asia. But now that she’s established here, she’s committed to supporting local garment workers, responsible sourcing and fair labor practices (the same pillars as American Apparel’s socio-aware m.o.) with her Made in L.A. label, stocked in niche retailers such as Need Supply, WhoWhatWear and Lisa Says Gah.