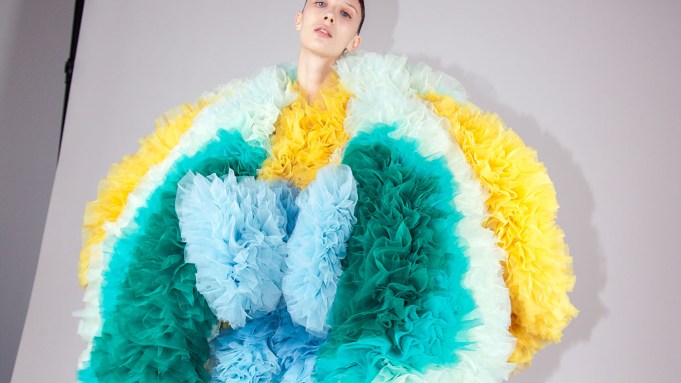 It is hard to believe anything Tomo Koizumi says.

How a Tokyo-based costume designer gets plucked from Instagram last month by Katie Grand, who offers to style a runway show at Marc Jacobs’ New York store, sounds like the wind-up for a joke. The fact that he set out to be a junior high school art teacher only makes their last-minute plans more baffling and impressive. But it is all true, true, true. By Tuesday morning, Koizumi was jet lag-free in Jacobs’ SoHo offices and 24 hours later he was up for an interview in the airy downtown space.

Surrounded by racks of the voluminous kaleidoscopic-colored designs he brought from Tokyo, Koizumi took a break from steaming, while his sister Yuka and a friend kept at it. To make the journey to New York, all of these confectioneries had somehow been stuffed into the three slightly battered boxes that were stacked in a corner. However jack-in-the-box that might sound, Koizumi described packing like rolling up a sleeping bag. “Yeah, it’s a bit extreme. But it is very light,” the 30-year-old said.

“I’m still not sure I’m in the fashion industry,” he said flatly.

“You might feel it at seven o’clock Friday night,” Grand said laughing.

Echoing that laughter, Koizumi said, “I’m working as a costume designer in Tokyo so I’m half in that industry and half in the fashion industry. I’m working a lot with musicians and they inspire me a lot, because they move a lot and they know how to show their beauty.”

Three years ago he suited up Lady Gaga in Tokyo after a friend of his was asked by the Grammy winner’s sometimes-stylist Brandon Maxwell to borrow some Japanese designer clothes. “I brought some clothes to her hotel and she wore it. It just happened like that.”

Grand was tipped off to Koizumi’s work a few months ago by Giles Deacon via Instagram. She later shot Maya Hawke and Kaia Gerber wearing some of Koizumi’s older pieces for an upcoming issue of Love magazine. After the designer posted images of a few of his more immense designs, inspired by Japanese royal costumes and kimonos, Grand decided they had to work together and texted him at 4 a.m. Tokyo time to tell him so. Once they were in agreement, she texted Jacobs’ assistant Nick Newbold, who consulted with the designer and squared everything away. “So it just all happened in 24 hours. Then Pat [McGrath] and Guido [Palau] got on board, and [casting director] Anita [Bitton] and KCD and the whole thing,” Grand said, adding that Tabitha Simmons served up the shoes for the show.

Koizumi and Grand only met for the first time Tuesday. “That’s a new experience of just diving in together and saying, ‘What should we do with this?’ I mean, we’d never even spoken on the phone, but I thought there was such energy about his clothes that I was like, ‘This guy can’t be anything but nice.’ I think it’s going to be fun.

“We’re all so used to working in a certain way. I work with Marc, I work with Miuccia [Prada]. We know what’s going to happen every season or what the process is. It’s quite nice to just do something spontaneous and last minute,” she added. “We’re very conscious of images and television and films being digested at a rate. This does seem to sum up something that’s going on at the moment, but I can’t quite put my finger on what. You can spend six months on a campaign and swipe right on Instagram and you get six images in less than 30 seconds. It’s just how things are at the moment.”

His colorful, feminine designs resonated with Grand. “It felt very in tune with some of the things that I’m attracted to in fashion at the moment. Valentino had done some very interesting things, not in the last couture show, the one before with volume. I felt this idea of clothes being bigger, and more fanciful and more joyous was very in the air. So when I saw Tomo’s work — not that it’s Valentino couture at all — I got that feeling of vastness and joyousness.”

Asked how long it takes to create one of his not-to-be-missed designs, the self-taught Koizumi said, “Actually, it’s really fast. It takes four or five hours. I have a lot of stock of ruffles in different colors. There are 50 colors always. Then I combine the matching colors. I kind of invented it but this technique may be really traditional. But my approach is a bit unique from others.”

Growing up watching John Galliano, he really enjoyed making bigger, more extravagant things. “Actually, I didn’t study fashion in Japan or anywhere so I just do what I can do. I majored in art education at my university in Japan so I have a license to be an art teacher,” he said. “I really like to use colors and I’m inspired by artists and paintings all the time.”

As a high schooler, he liked making dresses and fashion photography, which made him think he might become a stylist or fashion editor. Mark Rothko is a favorite, along with Georgia O’Keefe — curiously for their use of bland colors. But the way he sees it, sometimes the absence of things can help you in reverse. Asked about his current favorite designers, Koizumi said after a 15-second pause, “I really like McQueen — current — and past, and femininity. It’s a bit difficult. I really liked to watch collections 10 years ago but now I don’t watch many. I don’t check as much so that I use my imagination. Of course, I check a bit but not much. I don’t want to follow trends. I may be checking trends in order to not follow trends. I want to do something opposite of trends.”

Paintings are his main source of inspiration, especially in terms of silhouettes. Tokyo’s vintage book store area is another resource. As for standout older designers, Koizumi said Christian Dior is his all-time favorite, but he really wants to do something like Roberto Capucci, who uses strong techniques to push himself.

His celebrity clientele includes the musician Yuki, who often orders from Koizumi for her concert tours and music videos. His Instagram followers can attest he designed a poufy red, pink, white and crème-colored costume for Yukina Kinoshita to wear for Starbucks’ launch of “Very Much Berry Frappuccino,” a custom drink in Japan. “I think she’s an actress, but she’s really famous,” he said.

Contrary to the American designer mentality of fame equals expansion, Koizumi is approaching this breakout moment with caution. One of his dreams is to work more with internationally known singers and actresses for red carpet appearances. Designing a compact collection of made-to-order ready-to-wear is also on his wish list. To help him realize what many would consider a New York dream, the designer’s sister took time off from her full-time IT job. “I am a small designer and I don’t think I can do everything. So I just want to do what I’m good at — so I just do these different ruffles,” he said.

In New York for 11 nights, he plans to walk around after Friday’s show. “And I’m going to hang out with my friends in the clubs. I really like to go to clubs and to go out drinking. What do I like to drink? Anything — wine,” Koizumi said over laughter, which trailed pretty much everything he said. “And to go to museums — the Museum at FIT and the Met maybe.”

His only other trip to New York was a sightseeing-laden one eight years ago with his sister. Friends weren’t living here at that time, but this time is different. As for what they make of his only-in-New-York experience, Koizumi said, “They were really surprised, but also they are not sure what I do yet. No can imagine what is happening, right [turning to Grand, who chuckled affirmatively]? Because I am not an international designer.”

After the show he plans to celebrate by “mostly drinking,” but there will be time to shop later for American workwear. Filson will be the first stop, followed by window shopping at Bergdorf Goodman. “I am really focused on the show now,” he said. “This feels like more than a dream. It has happened really quickly.”

The New York friends, several of whom work in fashion, who are invited are a bit in the dark, since he hasn’t told them all the details about producing a show in Jacobs’ store. As for whether they are jealous, the designer said, “Jealous? Well, maybe after the show. I don’t know.”

Friday night will be dramatically unlike a regular night at home in Tokyo, hanging out with his boyfriend and their two Burmese cats, Khyi Khyi and Paan. Their names mean “dearest person” and “flower.” ”But I’m always thinking about my designs. I don’t have any hobbies other than my job. I’m always doing something for my designs, reading books, listening to music….I work every day but I also have an hour nap every day after lunch,” he said.

Employed at a university, where he helps foreign students, Koizumi’s boyfriend was surprised about this New York adventure. “I told him everything but I don’t think he knows what it means,” he said.

Jittery about the prospect of meeting Jacobs, Koizumi said he still couldn’t believe his good fortune. “I really want to thank him,” he said.