The event is hitting its stride, offering up a wide range of collections and design inspirations, from lush romanticism to Goth intrigue. 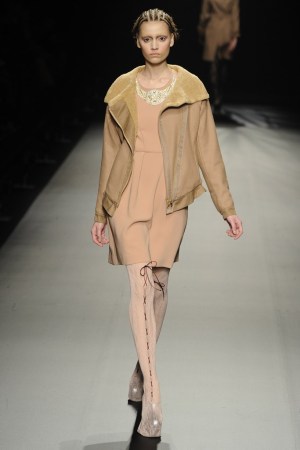 TOKYO — Japan Fashion Week is hitting its stride, offering up a wide range of collections and design inspirations, from lush romanticism to Goth intrigue.
Here are some of the highlights from the shows so far:

Somarta
Tamae Hirokawa turned out a romantic collection of ladylike pieces in a palette of red, pink, beige, ivory and blush. Prim jacquard pencil skirts and shift dresses were paired with edgier, motorcycle-inspired jackets, and tight, intricately constructed ruffles and tucks added depth to chiffon miniskirts and blouses. Modern touches came in the form of puffer jackets reimagined as capes and a long vest worn as a dress. The designer added sparkle with metallic accents throughout, showing up as beaded embellishments on satin frocks, foil prints and sequins peeking out between layers of frills.

Matohu
Hiroyuki Horihata and Makkiko Sekiguchi stayed true to their expertise for turning out relaxed but elegant takes on traditional Japanese dress. Once again they produced plenty of wrap coats and dresses referencing the kimono, but they also branched out into more fitted items — such as a motorcycle jacket and leather pants — to give the collection some contrast and edge. The collection’s standouts included capes and skirts with handkerchief hems, some of which were made with a wool fabric perforated to show a silk lining through the holes. Also of note: some lovely ombré prints in ink blue and canary yellow worked into dresses and skirts.

A Degree Fahrenheit
For his second show during Japan Fashion Week, designer Yu Amatsu showcased his skill at pattern cutting and dressmaking with a series of beautifully constructed styles that either hugged the body or draped and trailed gracefully as the models walked the runway. Color was sparse, with only a very light ice blue accompanying the many shades of gray and black, but the designer kept it interesting with mixed textures and details like geometric patchwork and carefully executed folds and gathers. A beautifully ethereal fringed, backless gown in gradating shades of gray and pale pink closed the show.

White Mountaineering
Taking the term runway to heart in the most literal of senses, Yosuke Aizawa sent his models down a long path painted to resemble a landing strip at an airport. True to the brand’s reputation for revisiting classic sportswear for the hipster set, the lineup comprised some great parkas and outerwear as well as patchwork knits and separates featuring every imaginable combination of plaid, zigzag and check. There were also a few styles in a tweaked camouflage. A handful of guys in airport-appropriate uniforms punctuated the show.

Nozomi Ishiguro Tambourine
For the second season of his new diffusion line, Nozomi Ishiguro seemed to meld a series of influences ranging from Western to grunge to hip-hop. Perhaps one of the first women’s looks out on the runway best summarized the multimedia mishmash: a short dress featuring a single plaid shirt sleeve spliced with part of a graphic T-shirt, half a skirt in lace and half of a dress form in embroidered black fabric. Several patchwork T-shirt dresses built on that theme. There were also fuzzy, textured knits, including a sleeveless number with a denim back. Fringe made the odd appearance on a denim shirt or jeans.

Alice Auaa
Yasutaka Funakoshi brought a taste of Tokyo’s unique Goth subculture — yes, it is still alive and well — to Japan Fashion Week. The show kicked off with a video of the designer walking in the woods before dropping his trousers, sitting against a tree and well…it’s not quite clear what is going on but maybe it’s better not to know. Moving on, a model wearing an actual table around her waist opened proceedings with a ruffled black dress. The collection proceeded to feature a knit bodysuit, a dramatic black coat with peaked shoulders, several other corseted numbers and a short black feathered dress.