Sources say Bernard Arnault has already called Tom Ford to request a meeting in the wake of Ford’s resignation from Gucci Group on Tuesday. 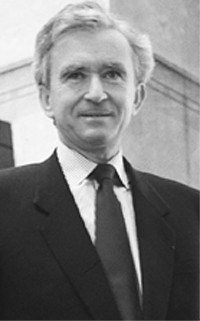 PARIS — Tom Ford apparently has at least one person eager to meet about his future — and it’s none other than Bernard Arnault.

This story first appeared in the November 6, 2003 issue of WWD. Subscribe Today.

Whether Ford would meet with Arnault could not be learned — and the designer is bound to have plenty of other suitors coming out of the woodwork over the next few weeks. An LVMH spokesman could not be reached for comment late Wednesday about the Arnault call.

But Arnault has always expressed admiration for Ford — even in the most bitter days of the LVMH duel to gain control of Gucci. And there’s an even bigger reason why he might want to meet Ford: to irk his arch rival, fellow French billionaire François Pinault, founder of Gucci’s majority owner Pinault-Printemps-Redoute.

Pinault, though, could have even larger worries on his hands, namely the continued slump in PPR’s share price and a creative brain drain at Gucci after Ford and De Sole depart.

Meanwhile, résumés from Gucci employees, shocked and saddened by Tuesday’s news, are already flooding into headhunters’ offices across Europe.

Michael Boroian, managing partner at Sterling International, an executive search firm based in Paris, warned that PPR risks losing more design talent. “This is a moment of movement in other major luxury groups and they may try to take out some of the strong talent [at Gucci Group],” he said. “I see an offensive coming in from the competition.”

As reported, executive search firms and PPR officials said they do not expect a mass exodus at Gucci Group at the senior management level.

Gucci creative director Ford has declined all comment since the bombshell announcement that he and De Sole would step down. But the news rocked the Gucci staff, who are now contemplating life without De Sole and Ford.

“We were dumbstruck when we heard,” said one employee, who requested anonymity. “We’re not scared about losing our jobs. We’re just really sad that we have to live without them.”

Andrea Pugi, the union leader in Gucci’s Scandicci plant, said employees were shocked at the news of the departure, especially since they were regularly informed about the status of negotiations by De Sole through internal memos. The general feeling until the very end was that they would find a solution. De Sole addressed union representatives and other employees Tuesday in what was described as an emotional speech reciprocated by tears and applause.

“It was like a punch in the stomach,” said Pugi. “Until the last minute the indications were that the company could have operated autonomously….We were convinced that he would have said everything was going to be OK.”

He said the union is urging employees not to panic until it has sat down with PPR and understood the strategy going forward.

One Gucci employee described the mood in Florence as an “incredible sense of sadness,” that even managed to extend beyond the plant into the local community. “There is a very, very strong attachment to Domenico and Tom and what they’ve been able to build together.”

A source noted that Tuesday was an emotional day for De Sole, but it doesn’t appear to be affecting his feverish work pace in the Tuscan office. “Domenico was in the office this morning before 8 a.m. and he has been in meetings all day. He didn’t even have time for lunch.”

On the financial front, luxury analysts digested the news, with a few cutting their price targets. One of the largest cuts came from Morgan Stanley analyst Claire Kent. Long bullish on Gucci, Kent reduced her price target by 22.9 percent to 74 euros from 96 and cut her rating to equal weight from overweight.

“We think Ford will be extremely difficult to replace,” she wrote. “The leather goods business has become much more fashion-forward and the likelihood of being able to find a successful designer quickly is low. The right chemistry between a designer and a brand is extremely difficult to find. So many great brands have failed because they don’t have that special ingredient.”

Kent added that in a worst-case scenario, in which PPR doesn’t find a strong enough designer to grow the brand, sales at the Gucci label could drop by as much as 10 percent in 2005, 8 percent in 2006 and by 3 percent thereafter. The Gucci division had sales of more than $1.75 billion last year, down 9.6 percent.

The news caught the fashion industry by surprise since, until about a week ago, it appeared as if there was still hope for a compromise between PPR and the De Sole-Ford team.

About 18 months ago, when Ford and De Sole initiated negotiations with PPR to renew their employment contracts, nothing seemed out of the ordinary. Gucci was holding its own, although the company, like most other fashion and luxury groups, was still reeling from the aftereffects of 9/11, rumblings of an attack on Iraq and sluggish economies worldwide.

By spring 2003, the talks had assumed a slightly tougher tone — especially after Pinault’s son, François-Henri Pinault, became chairman of Artemis, the family holding company, and assumed a leading role in the negotiations, according to sources. At the time, compensation emerged as one of the prominent issues, although the central issue had always been a guarantee of Ford’s and De Sole’s autonomy.

“We have a very strong emotional and professional attachment to the company and its employees,” De Sole told WWD in March. “We’ve been here since day one, and we’ve hired everyone. As long as we have our operating autonomy, we have a long-term commitment to the company. We would love to stay.”

And even at that point, De Sole expressed optimism about the talks. In announcing the group’s fourth-quarter results in March, De Sole said, “We do have an excellent relationship with PPR….we are in talks with them and I’m confident that the issue will be addressed satisfactorily over the next couple of months.”

But summer marked a turning point, the sources said. That’s when it became clear that Pinault and PPR ceo Serge Weinberg were serious about tightening PPR’s grip on its luxury pole, for which it spent more than $6 billion, and eventually could end up spending more than $8 billion.

During August, negotiations continued by telephone between Europe and America, where De Sole and Ford were vacationing. By the time of the spring 2004 collections in Paris in early October, Ford was obliged to leave fittings for his Yves Saint Laurent Rive Gauche collection to attend meetings with Weinberg and the young Pinault.

One source described the sessions as “torturous,” saying De Sole and Ford were “psychologically intolerant” of the thought of going to work under PPR’s thumb. “Both have an extraordinary ego, and I just never saw them working under Pinault, who has a very different concept of fashion and does not have a luxury-oriented vision of fashion,” the source said.

At one point, Ford and De Sole eased up dramatically on their salary demands as a ploy to gain more independence, but it was already clear by then that PPR was determined to assert its control. It was a standoff. At that point, Ford, who was shooting the Gucci campaign in Los Angeles last week, realized it was the end of the game. Gucci’s supervisory board, convening in Amsterdam late last week, were advised that the talks broke down.

One source said De Sole’s exit — at least — was inevitable from the moment PPR rescued Gucci from the hostile takeover attempt by LVMH. “You don’t spend the money that PPR spent on Gucci in order to hand over control of the company — and De Sole is not a man to take orders. Tuesday’s announcement should not have surprised anyone,” claimed the source.

However, Ford and De Sole always insisted that they were a team, and that one man was unlikely to stay at the company without the other. The company’s success also made them wealthy men — Ford earned $4.8 million in salary and bonus in 2002 and earlier this year cashed in $38 million worth of stock options, which came on top of the $23 million he netted last year. De Sole earned $2.4 million last year and stands to make about $14 million if he cashes in his remaining 550,000 exercisable options when PPR launches its bid for the remaining Gucci shares at $85.52 per share.

The source added that PPR will most likely begin downsizing Gucci Group, closing unprofitable stores, selling off under-performing companies, laying off staff and slashing Gucci’s famously generous salaries. “These are not boom times, and PPR has to figure out a way to make back the money it spent on Gucci. PPR will have to squeeze every last euro out of this company.”

Weinberg was in London Thursday and could not be reached for comment. He is said to have spent the day at Gucci Group headquarters, meeting with designer Stella McCartney, who returned from her honeymoon Tuesday night.

Meanwhile, sources said LVMH’s Arnault was in an ebullient mood over the turmoil at PPR and the new pressures bearing upon his business rival Pinault, who is also under the gun over the Executive Life affair, an allegedly fraudulent acquisition of a failed California insurer in the Nineties.

And the rumor mill continued Wednesday as to who might take up Ford’s reins at Gucci and YSL — with other speculation laid to rest.

Rolf Snoeren, half of the Dutch design duo Viktor & Rolf, said Wednesday they had not been contacted by PPR officials. The pair have been widely cited as potential candidates to take up the design reins at YSL.

Other names that emerged ranged from Narciso Rodriquez to the less-known Alessandra Facchinetti, a designer under Ford at Gucci. Facchinetti, a Prada alumna and former designer of the Miu Miu line, is described as very talented, methodical and organized, but lacking in the charisma for which Ford is so famous.

As reported, Stefano Pilati, women’s design director at YSL, is also considered a candidate to succeed Ford. And if PPR opts for a designer who trained under Ford, the French group might want to tap Christopher Bailey, designer at Burberry, or Francisco Costas, who succeeded Calvin Klein.

“PPR’s founder, François Pinault, and Serge Weinberg have the resources to attract talented designers,” wrote ING analyst Arnaud Joly. “In our view, the Gucci brand is sufficiently strong to survive the departure of Tom Ford.”

He also said that Ford’s departure could prove a blessing as having one designer for both the Gucci and YSL brands could be interpreted as risky.

Still, the uncertainty surrounding Gucci caused the bank to cut its price target to 65 euros from 70 euros. As for successors, BNP Paribas analyst Simon Irwin noted that Hedi Slimane or Alexander McQueen could be potential hires, while longer shots include Bottega Veneta’s Tomas Maier or Balenciaga’s Nicolas Ghesquière.

“However, it may be that PPR is uncomfortable with the risk of the ‘star designer’ culture, so it could hire from within the existing Gucci brand and promote David Bamber, or Stefano Pilati within YSL,” he said.

As for a chief executive to succeed De Sole, he suggested Burberry ceo Rose Marie Bravo, who could not be reached for comment, but added that PPR might also look to promote from within PPR, such as Thierry Falque-Pierrotin or Laurence Danon, although questioned whether this move would be interpreted well by the market. Gucci veterans Brian Blake and Giacomo Santucci could also be considered, he said.