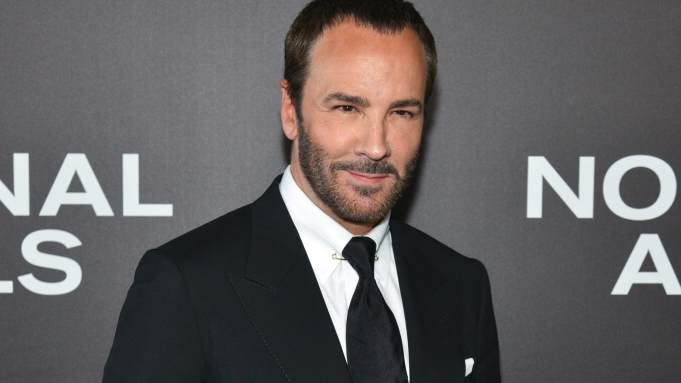 The decision follows fall’s one-season experiment during which he staged a tony, civilized affair at the former Four Seasons restaurant in New York.

For spring 2018, Ford will return to the traditional calendar, but not in London, where he’s shown most of his previous women’s collections. Rather, he will seek a permanent slot on the New York Fashion Week calendar, perhaps at the beginning of the week. “I like going first, when everyone is still in a good mood,” he said.

Ford is not only exiting the London fashion calendar. With his husband Richard Buckley and son Jack, he’s moving his primary residence to Los Angeles, though the family will retain its London house. And he has signed a lease on a studio space in L.A. — the old Regen Projects gallery (yes, Hedi Slimane’s former studio) — where he will relocate most of his women’s design staff. The men’s design studio is to remain in London.

Ford revealed the news in a Thursday morning conversation at Spring Studios, where he’s showing his fall collection to press.

He said that while instant fashion is likely the way of the future, it doesn’t work now for a simple reason: The industry isn’t ready from a basic scheduling standpoint.

“The store shipping schedule doesn’t align with the fashion show schedule,” he explained. The bulk of fall ships in August, “but you can’t have a show with clothes that have been on the selling floor for a month.” While his clothes shipped by July, Ford kept them off the floor until the day after the show. “We lost a month of selling. We had merchandise sitting in stockrooms,” he said.

Ford found that many of his specialty store accounts, though at first excited by the prospect of see-now-buy-now, grew frustrated that the clothes had to be kept under wraps until September.

“The first three weeks of September [immediately postshow] business boomed,” he noted, but ultimately, the frenzy didn’t make up for the loss of traditional long-lead press. Thus his return to the traditional schedule — and to New York.

“I need a home [for showing] and a consistency. Paris is crammed full of competition. Milan — been there and done that. London, I’ve tried and tried and tried,” he said, noting that the latter capital just doesn’t get the same level of international attention.

Tom Ford Gets Into Men’s Underwear