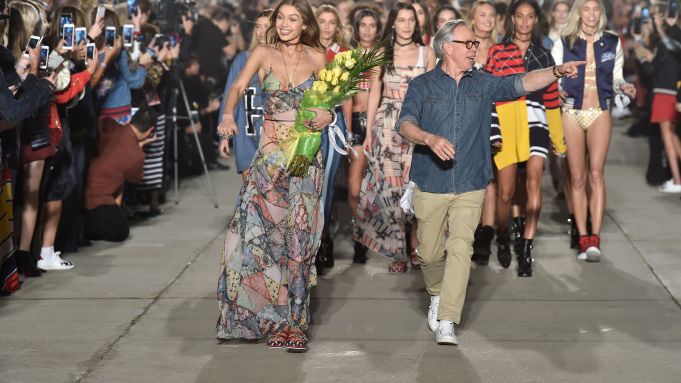 Tommy Hilfiger was determined to take over Los Angeles rain or shine, and pulled off the latter on Wednesday by staging a see-now-buy-now extravaganza on Venice Beach inspired by his muse and codesigner Gigi Hadid. “The day after the last show is when we started planning this,” said Hilfiger.

After obliging the swarm of photographers, Gaga snapped photos of the runway models on her pink iPhone and shimmied her shoulders to a remix of Rihanna’s “S&M.” She also bestowed a bouquet of red roses on Hilfiger as he led the finale with Hadid, who accepted her own spray of yellow flowers from her brother and mother in the front row.

Kaia and Presley Gerber kept each other company as they checked out the Nineties-meets-boho clothes. “I would wear everything,” Kaia Gerber said. “It was super-California, which I love.”

The show was followed by a Fergie concert, shopping and other Coachella-like amusements. Still, what differentiated the bash from many other fashion extravaganzas was the presence of regular folks, some of whom registered on Facebook to get a chance to attend. Hilfiger doubled the number of consumers invited to last season’s New York show, “Tommy Pier,” to 2,000, plus another 1,000 VIPs, 700 of whom were seated along the beachfront path.

Pairing a navy Hilfiger-emblazoned hoodie with a striped skirt, Judy Oreste dashed from her job as a hospital lab scientist in Long Beach, braving the 30-mile drive during rush hour to make it to her first-ever fashion show. She bought a scarf printed with a geometric pattern tinted red, white and yellow for about $50 from the Tommy x Gigi collaboration. “I love the fact that it’s New York Fashion Week but they’re doing it here,” she said.

Hilfiger also upped the technology ante by introducing a new visual-recognition app called Snap: Shop that allowed users to take photos of items on the runway and then purchase them immediately via a link to its e-commerce site.

Like last season, most of the 62-piece Tommy x Gigi collection sold out online that night, although the pop-up shop was stocked with more merchandise in anticipation of the rush. Total sales figures were not immediately available, but doubling the number of shoppers invited likely spurred more commerce. There was also a Frankie Collective tent selling vintage Hilfiger apparel, while staff in pristine white button-downs and bow ties screen printed complimentary totes drawn with pictures of Volkswagen vans and sunsets as fast as they could for guests waiting in line throughout the evening.

Natalie Yost, a former fashion writer who now works in human resources, bought a pair of high-waisted Gigi briefs and was perusing the vintage cutoffs. “I love that L.A. is getting more exposure as a fashion capital. I think it’s been super overlooked. We do have our own style and fashion and I thought that his collection really embraced that with the whole hippie theme. We are on Venice Beach, so I loved that whole aspect of it,” she said.

Amsterdam-based influencer Claire Rose Cliteur, who has 184,000 Instagram followers, didn’t hesitate to peel off her new Tommy Hilfiger pieces in order to try on a pair of vintage overalls. “The whole atmosphere is amazing, the models were looking superpretty and also the collection was very Coachella, very festival, very summer,” she enthused.

Indeed, Hilfiger said the evening was about “girl power and California style and music.”

“I always loved Tommy’s shows for their playlists. He could always pick a fun one and that’s something that all the models look forward to, not only the music we are walking to but the performance after,” said Hadid.

Hilfiger tapped his old friend Fergie to headline the night. “I’ve known Tommy for years and when he called me for this it was just the perfect match. I’m the quintessential Los Angeles girl, I always love a good welcome to Los Angeles. It’s nice to have fashion embrace being in L.A. and for people to get so excited about being here,” she said. “Venice Beach is the perfect place for this. It’s very free spirited. I remember I would come here with my friends on the weekend in high school and watch all the skateboarders and the artists and make music and take it all in.”

The duo Lion Babe took the stage next, and as she was heading home, singer Jillian Hervey said, “It’s great to be out in the fresh air. We have to go back to New York tonight, so this weather is really amazing. The fact that they transformed this whole place into a theme park is pretty cool.”

“That was so dope,” said model-musician Pyper America Smith, as she danced around with boyfriend Brandon Lee. Model Angela Lindvall, who brought her teenage son, waxed nostalgic about a Mario Testino-shot Hilfiger campaign she did in the Nineties. “It was back when they were trying to elevate the brand. It’s incredible to see how the clothes have evolved. They’re so modern yet have a touch of the old school.”

Hilfiger said he plans to take his show on the road, but for now, it’s Hadid who will embark on a world tour to promote the collection, with the designer joining her in select cities. How does she plan to keep her energy up? “Coffee and FaceTiming Tommy,” she said.