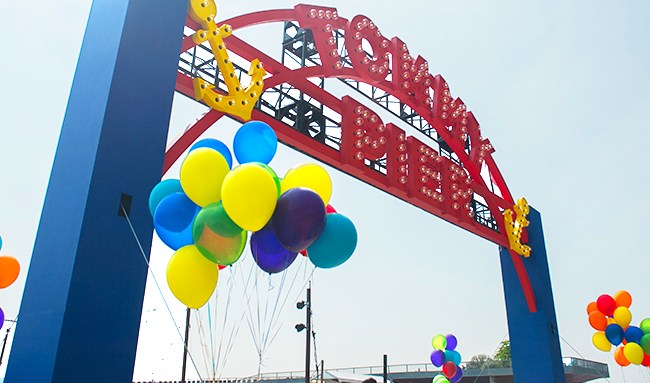 NEW YORK — “See-now-buy-now” appears to be paying off for Tommy Hilfiger.

The designer’s #TommyNow fashion show and carnival at the South Street Seaport over the weekend racked up significant retail sales of the fall 2016 Tommy x Gigi collection and Tommy’s women’s line, according to Hilfiger executives. The show also served as a major marketing event, not only providing endless social media posts, but also bringing adults and children to Pier 16 on Saturday to enjoy the carnival.

Tommy x Gigi, the collaboration with Gigi Hadid, was available for sale Friday night immediately following the runway show on-site and on tommy.com and, beginning Saturday, in 70 countries and at such retailers as Macy’s (pop-up shops in five key doors), macys.com, Hilfiger freestanding stores, Selfridges, Galeries Lafayette, Rinascente, Amazon, Alibaba and Revolve.com. In addition, it was being sold in a commerce partnership with Facebook Messenger.

While Hilfiger executives declined to give exact sales figures, they said a double-digit number of styles sold out online within hours after the show. More than 80,000 Tommy x Gigi product views took place on tommy.com, and sales on the site on Sept. 9 were about 220 percent ahead of a year ago. At retail — which includes Hilfiger’s freestanding stores and the two pop-up shops at the event — business shot up about 60 percent on the day of the show versus a year ago (the on-site stores stayed open until 9:30 p.m.) and a double-digit number of styles sold out at Tommy x Gigi on-site pop-up stores. More than 300 fashion and lifestyle Web sites live-streamed the shoppable show globally and then on demand via desktop and mobile.

As reported, Hilfiger, which is a subsidiary of PVH Corp., was the first brand to launch Artificial Intelligence conversational commerce for Facebook Messenger, named Tmy.Grl. The bot was globally accessible and was able to exchange more than 4,000 personalized one-on-one conversations with consumers in the first 12 hours without any media push, said the company. In addition, more than 300 sessions were started by consumers on Saturday using the digital shopping walls at the pier, resulting in direct purchases. Finally, all social content created around the show was immediately shoppable via tommy.com on Instagram, Snapchat, Pinterest and Facebook 360. The combination of all e-commerce-enabled social activations resulted in a 420 percent increase in traffic to tommy.com and a 300 percent increase in revenue generated, according to Hilfiger.

The runway show was presented to 2,000 industry executives and consumers who scored free tickets on Friday night. Executives then participated in the carnival activities after the show (before the rain began around 9 p.m. and things came to a halt, and the company gave out ponchos and umbrellas). The carnival was open to the public from Noon to 8 p.m. on Saturday. Despite the tropicallike heat and humidity, the piers had a steady flow of people enjoying the activities, such as the 40-foot Ferris wheel and Tornado, Gigi’s Boxing Club, tattoo booths, TH Carousel Insta booth and food stalls such as Ally’s Donuts, Dee’s Lobster Rolls, Ricky’s Hot Dogs and Tommy’s Favorite French Fries.

Kourtney Kardashian, her daughter Penelope, son Mason, and niece North West (daughter of Kim Kardashian and Kanye West), were spotted on the rides and playing the games and were mobbed by onlookers, while Hadid caused a frenzy when she arrived around 3 p.m., with huge crowds following her through the pier taking pictures with their iPhones. When she finally arrived at the Ferris wheel and was about to go on, it started to rain and her ride was thwarted. Hilfiger himself didn’t return to the carnival on Saturday.

The two pop-up shops selling Tommy x Gigi were busy both days. “We started selling Tommy x Gigi before the show and then after the show,” said Minja Hromic, a manager of the Tommy x Gigi pop-up shops at the pier. Among the top sellers were the cap for $65 and the tank with an anchor for $45. She also noted that the sweatshirts with the anchor and white sneakers sold briskly, as well as the sailor jacket Hadid wore to open the show.

Laura Loughnan, a fashion executive at Neu Look in the U.K., was on holiday and shopping at the pop-ups at the pier. “I liked a couple of the things, not the whole collection,” she said. “The Gigi stuff was cool.” She said she was definitely going to buy the Tommy x Gigi underwear.

Denise Curter, who lives nearby and is the founder and publisher of FiDiFamiles.com, a web site of things to do with kids, visited the pier with her two children. “I definitely came to see the clothes, which are incredible.” She also liked the fact that she could buy them on-site. “I wanted to see the activities for the kids. It’s cool for a fashion designer to communicate with kids. I think the Seaport and the Howard Hughes Corp. have done amazing things down here at the Seaport, and my kids go to school downtown. It’s become a neighborhood that no one ever envisioned. To see a carnival is mind-blowing,” she said. “For a well-respected brand to invest in this neighborhood on the eve of Sept. 11 is a milestone.”

Hadid fan Emma Mikhailoff explained her intrigue as, “She’s confident in herself. She’s not the typical model. I feel with societal standards now, they’re so skinny. She looks healthy and fit and she owns it.” Holding a bag with a $185 oversize fleece sweater, the FIT student also planned to buy the bodysuit from the collection. Mentioning she was in the audience at “The View” for Hadid’s appearance Friday, Mikhailoff said she knew five years ago that Hadid would break out. “I used to follow her mom Yolanda when she was on the ‘Real Housewives’ and that was the first time I saw Gigi,” she said.

Her father Olivier said, “He made a very smart move because he’s reconnected with my daughter’s generation. It is really the beginning of a new era. I hope she [Hadid] stays on this road because she could really become a big role model for this generation.”

Referring to Hadid’s message, Mikhailoff, co-owner of Sacha & Olivier on West 18th Street, said, “Well, it’s good and bad. The good is, ‘I’m beautiful. Here’s what I like to wear and I made it, so I’m more than just a model. I’m a brand.’ I’m lucky — you’re not — but you can dress like me.”

Eva Polynice, a fashion blogger from Jersey City who was being escorted around the pier in her wheelchair and was playing some of the games, said, “I think it’s amazing, giving back to the community like this. I also think the clothes are amazing. They’re so Americana,” said Polynice, who writes a blog called The Fashion Goddess Blog.

Sondra Minnich, a senior at Pace University, had seen the crowds gathering Friday night and although she didn’t have a ticket to the fashion show, she managed to meet Taylor Swift, who attended. “It was just luck. It looked really cool last night and I decided to head over to the pier,” she said. “I’m a huge Taylor Swift fan.” On Saturday, she decided to come with two friends to enjoy all the activities going on at the pier.

All the focus on Hilfiger was having a positive effect on the Tommy Vintage by Frankie Collective shop on the pier, which was doing swift business. “We sold the iconic big logo shirts,” said Jesse Heifetz, co-owner of two vintage shops in Toronto and Vancouver, as well as online. He said he was selling obscure things, from the alpine line to things from the early to mid-Nineties. “Everybody’s going after the big logos,” he said. “Vintage Tommy is back in a big way. It was reintroduced with Urban Outfitters and they can’t keep it in stock.”

Rounding the Ferris wheel with eight women, Tanya Carnahan said, “I’m from Boise, Idaho, and I bring big groups on fashion and adventure trips. We’re here for six days going to fashion shows and all the best shops.”

Moonlighting as a ”Style Spy Girl” blogger, she has access to select shows, but Hilfiger’s wasn’t one of them. “The tickets were going online for $1,800 Friday so we just came the day after to experience it. We wanted to walk around and feel like we were here where Gigi walked and where Tommy Hilfiger walked.”

Many in the crowd like Lynn Ban and her son Sebastian, who is in the third grade, live in the neighborhood and praised Hilfiger for the all-are-welcome carnival. After a dizzying ride on the Round-Up, Ban said, “We’re going to eat after.”

A jewelry designer with her own company, she said, “I love what Tommy’s done for fashion week. It’s definitely original and fun, and that’s what fashion week needs.” She added that she planned to look at the shops. “It’s great — see-now-buy-now. It’s instant gratification.”

Nearby, Susan Toplitz was really taking in the atmosphere, sketching on a notepad the temporary tattoo booth. Her friend Melanie Reim, FIT’s dean of illustration, was also capturing the crowds with pen and paper. Toplitz, an interior designer who had her own knitwear business in the Seventies and Eighties, said she didn’t plan to go on any of the rides. “I’m about 30 years too late for that.”

FIT fashion business management student Julia Colon said she interned for Hilfiger this summer and she was eager to check out Hadid’s collection. “It’s really cool they incorporated the carnival with the fashion show, which has really never been done before.”

As the Kardashian contingent inched through the crowd with iPhone shooting fans following like a string of magnets, one in-the-dark carnival-goer sighed, “What is happening here?” At the entrance, two others, who were just trying to get on the pier, found themselves fighting a stream of people. “They’re so aggressive.” A security guard replied, “You’re in New York. What do you expect?”