Top Chefs Dish It Out

Some of Europe's most renowned chefs are adding industrial design to their repertoires, creating tableware to augment their favorite concoctions from the kitchen. 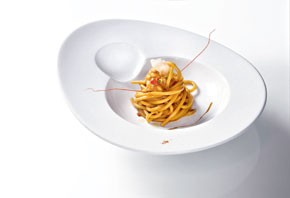 PARIS — Some of Europe’s most renowned chefs are adding industrial design to their repertoires, creating tableware to augment their favorite concoctions from the kitchen.

Yannick Alleno, the 38-year-old three-star chef at the Meurice here, cast his eye on the hotel’s dining room and felt a need to fill the emptiness in front of guests before the first dish is served and between courses. “Tableware has not evolved in terms of practicality,” he said.

So he created a reversible porcelain ring: deep bronze on one side, bright gold on the other. It remains on the table as a docking station for the white porcelain serving plates, etched with the chef’s initials. The design, called Onde, fits with a new contemporary decor by Philippe Starck.

The chef worked with the porcelain house Coquet, where Onde will be sold starting in July.

At the Crillon, two-star chef Jean-François Piège designed a dessert set with Bernardaud exclusively for his restaurant, Ambassadeur. It consists of a round plate with a colorful center, used as a support for a square porcelain dessert plate — or a coffee cup. The playful, contemporary dishes are accentuated by matching dessert silverware to tuck into signature sweets like a vacherin made with rose, litchi and wild strawberries.

“It’s consistency; my culinary expression goes all the way,” said Piège, 37, who worked on the set for two years and is designing new shapes.

Meanwhile, Massimiliano Alajmo, the youngest European chef to receive a third Michelin star at age 32 in 2006, loves the idea of tailor-made dishes. His collection, called In.gredienti, includes more than a dozen variations, each named after the dish for which it is most suitable.

For example, Pasta is for eating long pasta, with a built-in indentation on the side for twirling it onto a fork, while Riso, with its large, bulging sides and hollow middle, is designed for risotto or ravioli.

“My cooking experience was the key for building the concept of the tableware,” said Alajmo, who utilized his culinary knowledge to draw the shapes and to decide on the materials and their thickness.

Launched with German china maker Rosenthal, Alajmo’s dishes are sold at his three-star restaurant Le Calandre in Padoue, Italy; in his shop, and by Rosenthal’s distributors.