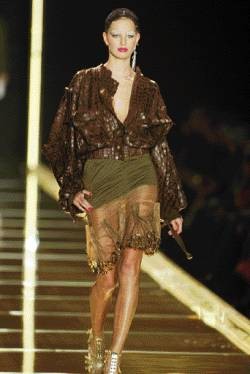 There were surprises in store in Paris. John Galliano created new proportions at Christian Dior, with the volume on top, while, in Junya Watanabe’s hands, bondage looks took on an unexpected propriety.

Christian Dior: John Galliano continues to soar — and we don’t mean his arrival at the Addict launch party at the famed Lido on a giant winged float. Where Galliano takes flight most spectacularly is on the runway, as he did once again in his surprising spring collection for Christian Dior. Part of the designer’s complicated, multilayered genius lies in that ability to surprise, season after season. Here, the thrill came, not in high theater or excess, but in a lineup of fabulous clothes that looked runway-to-retail ready — well, almost. And he roped in a lexicon of Hollywood ladies for his front row, from which they could select their personal favorites: Laura Dern, Penélope Cruz, Christina Ricci, Claire Danes, Rosanna Arquette and even the very blond Bette Midler, who taxied on over from the Ritz to take in the show. They all settled in for a breathless delight, since to call a Galliano show realistic is to speak in relative terms. All of the wonders remained: the explosion of color, pattern (one print heralded “25 percent off”), multiple references and inventive, technically masterful cuts. But here Galliano controlled the show-only impulse that can take him to all sorts of wild places in favor of a more mercenary focus. So in between the Leigh Bowery makeup, with its bright, glitter-laden eyelids, and the mile-high, all-strapped-up platforms, Galliano presented a precise, specific point of view that should keep those registers ringing to the tune of the 44 percent sales increase registered in the first half of this year. It all starts with volume — big on top, small on the bottom — either short or longer and tight. Galliano loves a blouson, and he showed it in countless ways, opening with a pair of back-billowing micro shirtdresses, their sexiness turned subversive in army green. He carried the loosened proportion through to bold leather bombers, a riff on athletic gear in silk lamé. And he touted the jacket elsewhere, as well. Clearly, Galliano sees his Dior divas in tailored mode for fall, and he sent out some staggeringly beautiful options: a divine smoking; a gray version, draped and fastened in front with a jeweled buckle, a hint of Old Hollywood about it. Beneath, he favored tight skirts and filmy dresses, some done up with major strap action. His only pants: silk utility trousers with a metallic bra top. Of course there was more, from diva swimsuits to beautifully embellished dresses, although not a single full-length gown. And throughout, military, utility, athletic and street elements converged. Galliano punctuated it all with great bags, belts slung with Tough Chic chains, and others in wide patent with jeweled letters in back flashing “DIOR” in huge capitals. Not that, at this point, Galliano’s Dior needs such an ID. But if you’ve got it, why not flaunt it? That’s what fashion is all about.Junya Watanabe: Naughty girls have never looked as nice as they did at Junya Watanabe’s garden party gone wrong. And it was so right. In a coy twist on the season’s fascination with bondage gear, Watanabe wound a complex web of straps and belts around dainty party frocks done in old-timey prints that ranged from a delicate baby blue calico and pink rosebuds to white-on-white embroideries and those last seen covering a sofa in Palm Beach.With the strains of Puccini’s trilling arias wafting about, Watanabe took everything pretty and proper and gave it a subversive edge. And he restrained with abandon. Watanabe crissed and crossed, bound pant legs around the thigh and rigged up tremendous Houdini-like harnesses. Straps running through the front of a dress were ratcheted up tight to create a little shirring or raise a hem, while others looped over the shoulders and held up built-in backpacks and pretty, bustle-like fanny packs or sidecar panniers as big as those on a packhorse. It was a feat to turn bondage pretty, and Watanabe’s inventive craftsmanship was really something to see. The cap sleeves of a white shift dress were wired and sculpted into tiny domes that rode above the shoulders just so, while a kooky floppy hat-cum-parasol floated over a model’s head as if on thin air. If this is wickedness, everyone should be so corrupted.