Top Stories of the Year: Givenchy Shows in New York

More than delivering spectacular fashion, the designer welcomed the public — which will have ripple effects throughout the fashion system for years to come. 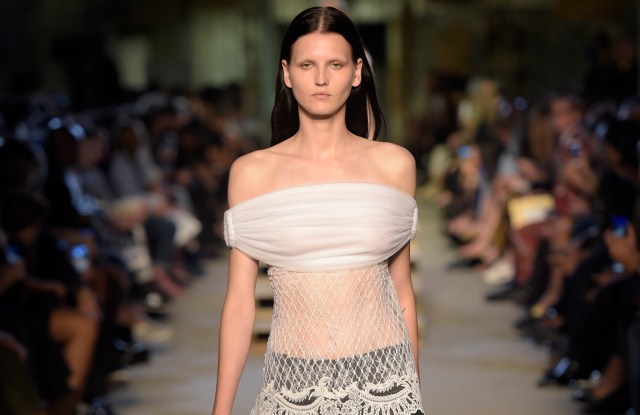 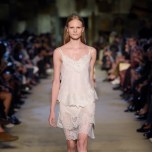 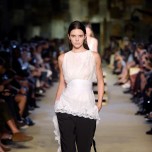 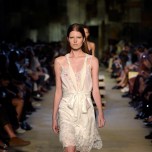 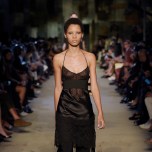 Riccardo Tisci’s stunning Givenchy show in New York was indeed a creative tour de force, but more than delivering spectacular fashion, the designer welcomed the public — which will have ripple effects throughout the fashion system for years to come.

“A celebration of family and love.” That was Riccardo Tisci’s advance assessment of the spring 2016 Givenchy show he took on the road to Lower Manhattan. It proved masterful, an amalgam of exquisite fashion, genuine emotion and production excellence. The event rocked fashion with both lyrical beauty and prescient, consumer-facing savvy.

This story first appeared in the December 16, 2015 issue of WWD. Subscribe Today.

Circumstances aligned to make this a show for the ages. In a conversation with WWD prior to the show, Tisci voiced his long-held love for New York City, “the heart of the world,” and that he had long wanted to show there. Sensing that the time was right, he applied to the CFDA for a calendar slot.

For all of fashion’s globalization and the itinerant meanderings of a handful of major Europeans — Chanel, Dior, Fendi, Louis Vuitton — Gotham has housed major-name guest shows only a handful of times through the years. And despite official-speak to the contrary, American fashion remains a little in awe of its more storied Euro brethren. Given that, the Givenchy crossing alone would have induced palpitations. Other factors only heightened the drama: Tisci’s status as a designer at the pinnacle of creativity and influence; the fact that the show would mark his 10th year at the house, and, of course, the date, Sept. 11, assigned to Tisci by the CFDA.

It all set the stage perfectly for a moment of magic — or a flop. Given the anticipation, anything short of brilliance, something ho-hum, would have felt like failure. In the audience, along with the broader celebrity contingent — Julia Roberts, Steven Tyler, Liv Tyler, Pedro Almodóvar, Nicki Minaj, Victor Cruz, Kim and Kanye — an impressive lineup of designers including Michael Kors, Tory Burch, Jack McCollough, Lazaro Hernandez, Joseph Altuzarra and Alexander Wang also turned out to watch.

Tisci delivered with acrobatic grace, his sedate, multilayered performance testimony that not all powerful fashion shouts. He showed outdoors at Pier 26 just as night fell upon the illuminated Freedom Tower, a glorious rendition of the “Ave Maria” proclaiming the show. His friend, “second mother” and sometime collaborator Marina Abramovic created a series of slow-motion tableaux, performance artists engaged in everyday activities but in slow motion demanding thoughtful consideration: a woman soaking under a faucet — “water to cleanse the spirit,” read the show notes; a couple embraced in a clearing of trees that “give support and life force.”

The designer acknowledged the 9/11 anniversary through his location, staging, music — it drew from various religions — and the overall aura of respect. But he put on a fashion show, one sprung from the belief that fashion can encompass reflection while expressing emotion. Noting his 10th-year milestone at Givenchy, he examined the pillars of his powerful vernacular, especially the play of feminine and masculine, rendered as lingerie and tuxedo dressing. He also touched upon the facial decoration he’d introduced for fall.

A creative blockbuster. Yet that was but one side of the show’s impact. Hand in hand with casting fashion as near-mystical experience, Tisci folded in another element, the fallout of which may prove even stronger — the public element, welcoming upward of 800 civilians and an additional 200 fashion professors and students to the show. The idea of consumer-focused shows has percolated for some time; it has been discussed and experimented with to a degree. The resort globe-trotters typically invite important regional clients (or fly in some not-so-regionals) to their iterant extravaganzas; the CFDA and American Express have collaborated on some consumer-audience, current retail-season shows. But this was a first: A major house opening its doors to the public — no proof of Givenchy purchase required.

“Opening to the public was my dream for many, many years…” Tisci told WWD. “Fashion is amazing and very exclusive. But [I’ve long thought] one day I would love to do a show where anybody — which is the reality — could be a part of it.”

The move has already resonated beyond the designer’s personal desire. As more and more of modern life is lived virtually, fashion consumption included, brands give attention to how their shows will play to the global consumer audience via live-stream and real-time social media. At the same time, those brands are increasingly sensitive to the downside of the months-long gap between showing and shipping, with many at least considering the feasibility of showing closer to the consumer retail schedule. Some are trying it already: Proenza Schouler’s McCollough and Hernandez disallowed short-lead coverage of their pre-fall collection. And in the contemporary arena, this week Rebecca Minkoff revealed her plan to forego a fall presentation in February and instead show her current-retail spring collection to an audience with a hefty consumer component.

While Tisci and Givenchy have not indicated a preference for changing the timing of their show, by opening the Pier to the public last Sept. 11, they thrust the brand into the forefront of an essential discussion. And not by accident.

“This is a couture house where you can buy beautiful dresses or bags, furs, a lot of expensive things,” Tisci said. “But one thing that I’ve always made sure of since Day One when I arrived is that you have a reachable product for people who want to be part of the journey for this dream. So for me, it was important to let people, real people who one day want to be clients, people who really love what I’m doing and follow us, be part of this big moment of celebration in New York.”