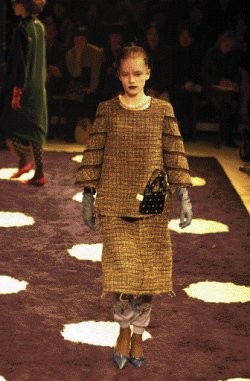 PARIS — The fashion news in the City of Light for fall included elegant tailoring, the juxtaposition of sports elements with refined details and items such as blousons and leggings.

Véronique Leroy showed a strong collection this season that hit all of the key trends, with bold leather pants, tight little knits, oversized blousons and skinny lace leggings. Exploring the world of sport, she did parkas with droopy shoulders, while in a more feminine vein, there were seductive lace camisole dresses.

Yvan Mispelaere, formerly the designer at the house of Louis Féraud, made his debut effort mixing the worlds of sport with a more ladylike realm. White jodhpurs were paired with parkas and short hooded sweatshirts, while Renaissance ruffles decorated sporty blousons and dresses with cutout sleeves. The collection, in vivid shades such as green and pink, showed plenty of imagination.

Meanwhile, in his second collection for Féraud, Jean Paul Knott found himself in the sticky position of trying to define an image for the dusty brand best known for its suit business. It is not an easy job. Knott tried just about everything, from bright geometric-print pants to elaborate embroidered leggings and asymmetrical dresses wrapped around the body with chains. Most of these clothes were fine, varying in mood from rocker chick to sophisticate, but they didn’t chart a clear identity for the house.

Yet in his signature collection, Jean Paul Knott hit the right notes, moving away from the tough rock aesthetic that has marked his recent collections to a chicer look based on an elongated silhouette and perfectly tailored suits. His herringbone tweed pantsuits and big brown corduroy coats featured high waists and big square shoulders — a noteworthy contribution to the feminine-masculine dialogue. The elegant black shirtdresses played perfectly against his signature wrap dresses, which were held in place by leather belts or metal pins.

German Lutz Huelle — known simply as Lutz — took a step in the right direction, too, with a playful collection. His theme was mutation, and he showed pieces such as a trenchcoat and slipdress that became a short jumpsuit with the undoing of a zipper. Zippers also figured as decoration on his pleated dresses and skirts, while his big striped sweaters twisted around the body in an alluring line.

Another German who shows in Paris, Dirk Schonberger, is continuing to refine things. The designer, who’s known for his men’s wear, gave tailored elements a soft, feminine touch, with dresses cut with capes in the back and well-proportioned trenchcoats. Pleated skirts, an oversized smoking jacket and capes rounded out the promising effort.

Jun Takashi, the Japanese behind the Undercover brand, was lighthearted, too, with his collection inspired by paper dolls. A pair of girls appeared in lace-motif dresses, and one started to attach cutout clothes to the other with Velcro tabs. The show continued with myriad cutouts of ladylike clothes and accessories, including necklaces, brooches and bags, applied to jogging pants, sweatshirts and dresses, to blend the bourgeois with streetwear.

Dirk Van Saene, an Antwerp designer, returned to the runway after a several-season hiatus with such looks as an orange knit cape with long fringe, tweed coats with knit collars and pockets and a pleated white shirtdress in chiffon and fleece.

Alexandre Matthieu, the brand done by Alexandre Morgado and Matthieu Bureau, also returned to the catwalks after a couple of seasons away. The designers worked a diamond theme, printing the stones on blousons or making the pattern more abstract in leather pieces with stitching details.

Tom Van Lingen, who designs knitwear for Sonia Rykiel, delivered a signature collection of short knit skirts with graphic patterns. Some sweaters billowed open at the sleeves, while others had asymmetrical details. He also worked an Eighties theme in his silver minis and strong-shouldered jackets. Gaspard Yurkievich, too, explored the Eighties in cute black dresses with sequined suspenders and colorful sweatshirts in geometric blocks of green and pink. His strongest pieces, however, were the fur and lace dresses with sequins on the bust.