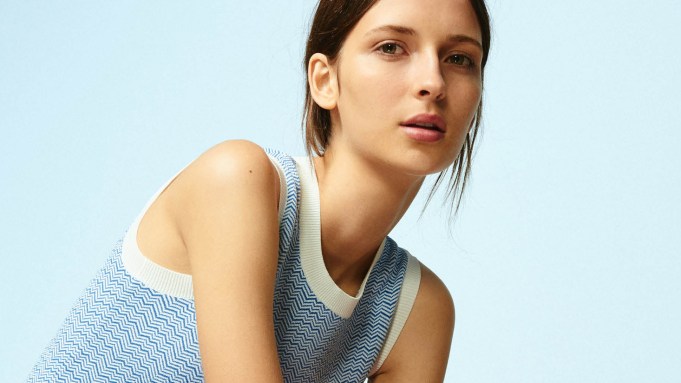 It’s been almost three months since Tory Burch made her investment in the athletic arena public with Tory Sport. The Web site, e-commerce and first retail pop-up in downtown New York City — all separate from the main Tory Burch line — have been up and running since September when the brand launched for fall. Customer feedback is in: “It’s been superexciting,” said Burch, walking through her second Tory Sport collection for spring on Thursday at her West 19th Street headquarters. “Tennis has been extraordinary and coming and going” — the company’s term for clothes a consumer might wear to and from a workout if not during it — “and running. Those are the three biggest categories.”

The spring collection was well under way by the time fall hit retail, but Burch said she and her team had time to reflect and adjust the new collection based on customer feedback. For the most part, the lineup was consistent with the Royal Tenenbaum’s-inspired retro-freshness that influenced the label’s aesthetic at large. Bright, bold colors are used in graphic prints and colorblocking patterns, imparting a feeling of Seventies sport on the look. Burch said the focus was on developing real performance fabrics across all items and using them in ways that were not so obvious, such as the Coolmax integrated into cashmere, merino and cotton tops and cardigans that can go from the office to the barre. Another nifty fabric development was a technical stretch, wicking nylon lasered to look like broderie anglais on a tennis dress.

The combination of sporty and pretty gives the label a keenly distinctive edge in a market to which the floodgates opened a while ago. The term “old school” was invoked several times to describe cotton T-shirts, tanks and their colorful graphics, yet they felt new. Standouts included the swimwear — bikinis, one-pieces and rash guards meant for swimming and surfing — that had a cool throwback vibe in its use of stripe details and a rainbow-colored splash print. Tracksuits have been playing well in Sport, so Burch offered more colors and a new tracksuit jumpsuit. In tennis, an ivory bodysuit with two rackets printed across the butt was playfully cheeky.

Perhaps the biggest development in the collection was the newly extended golf lineup. “The golf market can be tough,” said Burch, lamenting the state of fashion for female golfers. Her style solutions included a navy and white group, including a neat shift, a pair of slightly cropped checked pants in a mini window pane check that also appeared in a miniskirt with a patch pocket. A plethora of polos, windbreakers and nylon bombers in pink, orange, yellow, navy and cornflower blue could be worn across all sports, coming or going.

As for accessories, a pair of logo fins was for the showroom only, but the splash-print shower slides, a multicolored sequined backpack and the tennis bag — the first run of which has already sold out — are for retail.