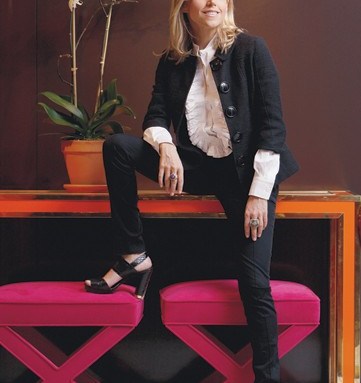 Tory Burch is looking for an investor.

The hot apparel and accessories firm, which is estimated to generate as much as $200 million in wholesale volume annually, is shopping around a 30 percent stake in the New York-based business, according to sources.

The steep asking price — a $935 million to $1 billion self-valuation for the whole company and about $300 million for the 30 percent stake — has narrowed the field of investors down to two main bidders, TSG Consumer Partners and Bear Stearns Merchant Bank, said industry sources.

However, calling the asking price too high, particularly given the current lending environment, sources estimated the stake’s price would come in closer to $250 million.

Tory Burch and a spokesman for TSG declined comment, and Richard Perkal, senior managing director and partner of Bear Stearns Merchant Bank in charge of its retail and apparel side, did not return calls.

Although Tory Burch has been courted by strategic and private equity investors for more than a year, the designer told WWD in April that she wasn’t planning anytime soon to sell the business that she and Christopher Burch, her soon-to-be ex-husband, founded four years ago, but that she also wasn’t against the idea in the long-term.

“I’ve taken a lot of meetings, and met with many people about this,” Tory Burch said in April. “I never turn down a meeting, but I just don’t feel that it’s the right thing to do right now.”

Although it is not known whether the 30 percent stake comes from the designer’s or her ex-husband’s share, sources have speculated an outside investor would provide a solution to the estranged couple working together as co-owners, which they have done since their separation two years ago.

The designer and management team likely would stay at the helm, using the money invested to fuel the company’s ambitious goals of expanding internationally, rolling out a scheduled five stores a year, adding product categories and expanding its wholesale business into more doors.

A rare success story in this economy, Tory Burch’s business is booming. Beginning as a retailer, Tory Burch has 14 of its own stores. With apparel wholesaling mostly from $119 to $166 and accessories from $95 to $272, the brand is sold in contemporary and updated bridge departments, reaching everyone from teenagers to Baby Boomers, in stores including Saks Fifth Avenue, Neiman Marcus, Bergdorf Goodman, Bloomingdale’s, Scoop, Selfridges and Harvey Nichols. Half the business is accessories, which more than tripled in sales last year, and the Council of Fashion Designers of America in May gave Burch the Accessories Designer of the Year award.

San Francisco-based TSG, which opened offices on Fifth Avenue last year, has a portfolio of luxury beauty brands, including Smashbox Cosmetics, N.V. Perricone M.D., Alterna Professional Hair Care and PureOlogy, and seeks to expand its reach to apparel, footwear and accessories. TSG looks for firms with sales between $50 million and $300 million, “high margins, great entrepreneurs and categories that welcome new products, which offer luxury and functionality,” managing director Alexander Panos told WWD last year. Private equity firms tend to flip firms after three to five years, and so far, TSG has held on to its investments from one year to, in the case of Voss water, more than five years.

“Retailers have been great partners in sharing which brands they love and which brands they can get behind…they are excited to have us involved because we bring wherewithal to companies they do business with,” Panos added. “A new company will sometimes have a lot of initial success, but then come the realities of how to provide a couple hundred retail doors with education and training and logistics. We can provide those resources immediately.”

Bear Stearns Merchant Bank, a private equity arm that remains after the shuttering of the bank, has a portfolio that includes mainstream retailer New York & Company Inc. and Stuart Weitzman Holdings LLC, and that once included Seven For All Mankind LLC.