More than an exploration of a theme, Tory Sport fall was an exercise in product and category development with its youthful clientele in mind. 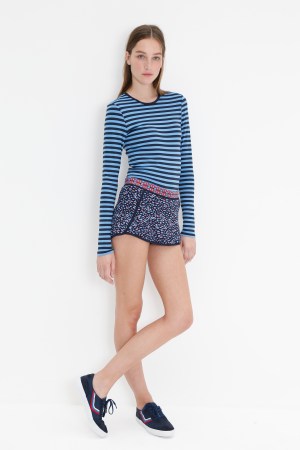 It’s a big moment for Tory Sport, the activewear/ath-leisure offshoot of Tory Burch that’s become the company’s key investment. A few hours before the launch party for the line’s sprawling flagship in New York’s Flatiron District Wednesday night, Burch was in her showroom for a preview of the fall collection. The following day was the look book shoot; next week, she’ll be off to Dallas for a trunk show at Southern Methodist University’s Theta House — Burch was a Theta herself at University of Pennsylvania. Targeting a college sorority for one of her first Tory Sport PA’s says a lot about the line’s demographic. “It’s definitely a different customer [than Tory Burch], a younger customer,” said Burch. “Tory Sport is more of an opening price point.”

The fall collection was lightly influenced by Africa, most obviously in a few generically tribal graphics in Burch’s signature shade of orange. But more than an exploration of a theme, the lineup was an exercise in product and category development with its youthful clientele in mind.

Burch reported that simple, piqué tennis sheaths were gaining traction. She also expanded the golf range, added a bit of ski via sweaters emblazoned with the word “ski” and giant furry snow-bunny boots, and introduced true performance outerwear with down puffers, a long weather-proof down navy coat and a plaid jacket lined in shearling fleece.

Since Tory Sport launched last fall, its aesthetic seems to be evolving in an increasingly retro/preppy/kitsch direction, particularly for the items that are classified as “Coming and Going” (as in what one wears to and from the gym). Striped T-shirts bore little terry heart-shaped details and tennis balls with grumpy faces on the chest. Neo-Seventies tracksuits, another nascent hit for the label, came with graphic “V” motifs on the jackets and big orange stripes down the sides of the pants. A grandpa plaid appeared on golf windbreakers and outerwear.

The look won’t be for everyone, but it is savvily distinct.