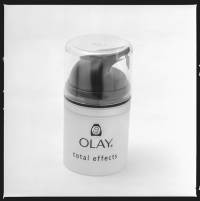 NEW YORK — Everybody wants to look a little younger — and it’s showing at the register.

Retail sales of mass market antiage skin treatments are up 15.6 percent to $345.7 million, for the year ended Sept. 8, according to Information Resources Inc. And these figures exclude Wal-Mart, which can account for 20 to 30 percent of the business.

In third place is Neutrogena, which markets Healthy Skin antiwrinkle lotion and Visibly Firm cream. The company has seen its anti-aging skin care sales jump 54 percent to $46 million, for the period.

“We see the population getting older. We see growth of health clubs, yoga and all the stuff we do to look young and feel young,” remarked David Morocco, executive vice president of marketing at Brooks Pharmacy, a 250-store Rhode Island-based chain. “It is a new young-old population.” And yes, he said, Brooks’ sales have been rising. So important is skin care to Brooks that the chain has been testing a skin care service counter in one of its stores.

Marti Bentley, divisional merchandise manager, at Manhattan-based Duane Reade,which operates some 200 stores, agreed that skin care sales have been growing. “Our sales are doing well,” said Bentley. Referring to the antiage segment, which ushered steeper retails into the category, she noted, “the higher-priced skin care seems to be accepted by the consumer.”

Sales gains in the aging skin care segment are not exclusive to the mass market. NPD BeautyTrends, which tracks sales at department and specialty stores, reports that sales of antiage products, or what it calls the Age Specialist category, shot up 13 percent from January through June for sales of $203 million, representing 21 percent of the prestige skin care market.

And this spurt in sales of antiaging facial skin care is likely to be further boosted, thanks to the Botox revolution.

Marketers may have once secretly feared that the FDA’s approval of Botox Cosmetic would threaten sales of certain topical solutions. But now brand managers and dermatologists alike are saying it is just the contrary — the increased attention on appearance and antiaging could further bolster retail sales.

Said Michael Kuremsky, marketing director for Olay, “I think that Botox has created a ton of buzz around facial skin care. Women are doing things to look younger.”

Then there are also numerous women who would not want to endure or could not afford a Botox treatment, which lasts for three-to-six months. Botox is injected into the muscle, blocking nerve impulses, thus relaxing the muscle to create a smooth surface.

For those consumers in particular, research and development labs have kicked into high gear to create formulas that could replicate the effect of Botox.

“Across the board, everyone is looking for a Botox-like product,” declared Gus Bezas, executive director of Milbar Labs, which counts prestige, mass and direct-selling brands among its customers.

Victoria Perrella, vice president of marketing at Mana Products, a skin care and cosmetics supplier, which also markets the Black Opal brand, said it has been having much success with a new vitamin C serum just launched. But it, too, “is working on something” to replicate the benefit of Botox. “We don’t have anything right now. But everybody is jumping on the bandwagon.”

Several researchers said they were working on Botox-like skin treatments that will start hitting the market over the next few months. At least one item has already landed in the department store sector. DDF Doctor’s Dermatologic Formula introduced Faux-Tox in September.

But for now, at least, skin care sales in the mass market are trending up faster than in any other key channel, according to Kuremsky of Olay, adding, “We are looking to leverage that trend.”

Other mass companies are, too. Del Laboratories, whose strength has been in nail care and color cosmetics, with brands like Sally Hansen and Naturistics, is entering the facial skin care arena next year with an item called Age Chaser.