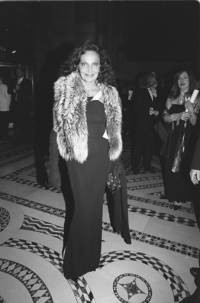 NEW YORK — “In fashion, you must provoke. You must be provocative.”

This was just a bit of fatherly advice coming from none other than 80-year-old Pierre Cardin, despite reports his business empire is in trouble. Cardin leaned far over a plate of pasta in his thick black glasses to make his point better heard to a pair of similarly bespectacled designers —with fewer years between the two of them. Did he not know he was talking to Viktor Horsting and Rolf Snoeren?

Heck, being provocative was the theme of the night.

For its 19th annual Night of Stars on Thursday, Fashion Group International knocked the wind out of stuffy old awards ceremonies and let its participants run wild — swathed in fur and smoking at the tables. After having been denied a trio of Council of Fashion Designers of America Awards, Sean Combs, wearing a Ralph Lauren suit, claimed a trophy with thank-yous to God, FGI, his mother, Jeff Tweedy, his design team, Anna Wintour and André Leon Talley, Naomi Campbell, Kal Ruttenstein, Tommy Hilfiger, Tom Ford — “for being so sexy, Tom,” — Ralph Lauren, Dolce & Gabbana, Versace, “all the people in New York, and America, for letting me represent the USA.” In that order.

Manolo Blahnik wheeled out Sarah Jessica Parker in a black Yves Saint Laurent gown with a big bow on her belly, even though she was due to give birth at any moment. Wintour, meanwhile, asked John Galliano to whip up a Dior look inspired by “La Bohème” in honor of Baz Luhrmann, who is directing a new stage release of the opera, and took a shot at pop diva Britney Spears as she presented his award.

But things got really uncomfortable when Harvey Keitel decided to read a lengthy passage from Eve Ensler’s “Vagina Monologues,” graphically describing the crusty details of childbirth and their impact upon the orifice in question. Poor Blahnik nearly squirmed right out of his seat.

“I’m beginning to wonder if I have a vagina,” gasped Diane Von Furstenberg.

Even the tables were controversial. Roberto Cavalli had done them up with animal-print silk napkins that, when placed upon the guests’ laps, looked as if everyone had slipped a Victoria’s Secret leopard-print thong over their Dior tuxes and gowns. At one point, Horsting was caught bobbing under his table for a bit.

Then, oops, they did it again. Take that, Britney.