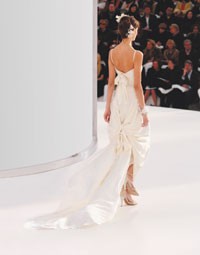 Chanel: You’ve heard of the ivory-tower designer? At Chanel, make that a stark white-and-chrome edifice, soaring 32 meters (almost 105 feet) toward the newly restored center dome of the Grand Palais. While his proverbial artiste counterpart swans about in glorious digs indifferent to his constituency’s needs and desires, Karl Lagerfeld views his towers — both the one constructed as the centerpiece of his spring couture set and the one he frequents more regularly, on the rue Cambon — as seats of razor-sharp currency and uber fashion power, both rooted oh-so-firmly in reality. Thus with the Paris couture light dimming all around him, Lagerfeld re-illuminated its core with an ultrachic, ultracontrolled collection that spoke breathlessly to those clients of the borrowing kind (the Hollywood season set) and, more importantly, the buying kind (ladies for whom off-the-rack clothes just won’t do). For spring, he’s tempting them both with a beautiful collection in which his models looked engagingly jeune fille and at times even Mod, if occasionally awkward, courtesy of their flat boots, reworked versions of a pair Mademoiselle herself was photographed wearing in 1957.

Day chez Chanel is about small jackets and coats over sculpted dresses, waists raised slightly in front, skirts falling softly over the hips. These came in combinations of white, black and whisper-soft pastels, their lines unfettered except for multiple hair ornaments and frilled additions to the neck or wrists. The coquettish allure of those collars and gauntlets hinted at what would come for evening, an ebullient treatise on ornamentation. But heavy-handed? Not a chance: For all the bounty of embroideries, appliqués, feathers and fluff, Lagerfeld kept everything impossibly gentle. He worked light-as-air fabrics into myriad shapes — full-skirted party frock, flamboyant trapeze, an Edie Sedgwick moment — and, while he ladled the froth, he knew just when to quit. A pleated party dress was veiled under a sheer, rose-embroidered coat; a flurry of shredded silk trimmed the crystalled lace trapeze cutaway into an endless train; elsewhere, feathers danced against lace and tulle. And when Lagerfeld could say no more with abundance, he pared down with stunning grace, a simple white gown gathered in back into two bountiful bows.

Throughout, the models circled the tower and then disappeared inside. For the finale, the tower soared skyward, revealing Lagerfeld’s entire lineup positioned on a four-tier circular stairway, like an haute-clad Ziegfeld chorus. Talk about a stairway to paradise.