The coed movement is serving as a catalyst for a unification of men’s and women’s.

By Katya Foreman
with contributions from Alessandra Turra
on June 4, 2018
View Slideshow 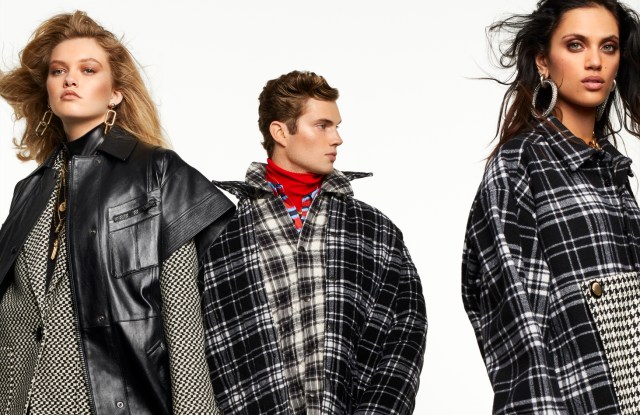 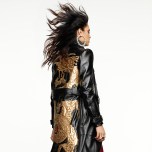 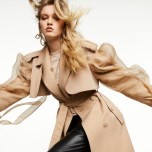 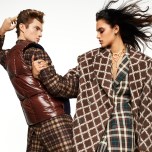 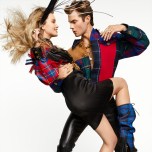 PARIS — Fashion is having a his-and-hers moment. With a phalanx of influential brands including Gucci, Balenciaga, Givenchy and Saint Laurent headlining the momentum to coed shows, men’s and women’s collections are becoming mirror reflections of one another.

Also driving the convergence is the streetwear trend gripping the industry, plus the open mind-set of younger generations coming of age in a socio-political climate where more and more open discussions are taking place around gender boundaries.

According to Carlo Capasa, president of the Camera Nazionale della Moda Italiana, the coed movement confirms “fashion’s ability to catch, codify and [reflect] the most radical social and cultural changes.”

“Setting aside gender stereotypes and breaking boundaries between the masculine and feminine, it becomes fluid,” he said.

For Emma McClendon, associate curator of costume at The Museum at FIT, the Seventies — an era that saw a crossing over of fits and styles across genders, with women wearing pants en masse for the first time and men wearing platforms — was possibly the only other time in modern history that men’s and women’s fashions have so resembled each other. “And now I’m really struck by how close they are, in all parts of the market, whether we’re looking at jeans and the styles that are being sold to men and women, suits or the high-fashion runways. It’s very interesting to see that comingling,” she said. McClendon also credited among historical references the influence of Yves Saint Laurent who as the inventor of the smoking jacket — with the androgynous Betty Catroux as his muse — “was playing with archetypes of men’s wear and literally putting women into men’s wear.”

“What’s interesting with the current wave is this unisex aspect that is not necessarily always one way or the other, but meeting in the middle almost,” she observed.

Entering adulthood in a hyper-political digital landscape, with so much access to imagery and history, this generation has “a way of questioning binaries, roles and identities that have traditionally been presented as irrefutable fact,” McClendon continued. “And seeing them as mutable cultural constructs.

“Even here at FIT the interest from students in this idea of gender nonbinary clothing is really interesting,” she said, describing how graduates are being pushed to rethink the product development and pattern-making side, “how to create clothing that isn’t binary or that’s adjustable in some way in terms of inherent fits.”

Since the dawn of post-modernism, from the late Sixties through the Seventies, Eighties and Nineties, “we really see a shift away from the use of clothing as a way to be appropriate to a way of fashioning yourself, your identity. And that mentality and attitude towards clothing seems incredibly pronounced in this younger generation that is consuming and driving trends,” she added.

For Riccardo Grassi, whose namesake Milan-based showroom carries brands including Marco de Vincenzo, Drome and Alchemist, the new generation “doesn’t think about if a brand is men’s or women’s. They buy what they think is fashionable, picking the specific accessory or ready-to-wear item.”

In parallel, designers and brands have realized that the message of a trend or a look becomes more powerful when proposed for both sexes. “This way, specific items and looks become more iconic,” Grassi said.

Over a short space of time, the impact of the coed movement on the show calendars has been seismic: With 51 brands staging coed shows during the fall women’s calendar across London, Milan, Paris and New York, the biggest men’s fashion week is happening during women’s. But in terms of how the trend may impact retail, it’s more a question of moving mountains.

With consumers increasingly shopping across collections regardless of the gender orientation of the department, buyers are closely monitoring the trend. But the reality when it comes to merchandising and organizing departments is less fluid than the runway, especially for department stores catering to a broad consumer base.

Karen Vernet, director of men’s fashion at Printemps, which inaugurated its five-story Printemps de l’Homme men’s building in January 2017, said the majority of its male customers want a separate building from the women’s, including for practical time-saving reasons.

However, on the men’s and women’s fashion floors, “where we’re dealing with a younger, fashion-obsessed customer profile,” Printemps presents a selection of no-gender brands. The store doesn’t share statistics on the gender of those making purchases in the respective departments, but Vernet noted a female shopper recently bought a 15,000-euro Balmain T-shirt in the men’s building. “And it was for her.”

For Vernet, the convergence of trends and the blurring of borders “is clearly happening” and has spilled over to accessories. Recently it became trendy for women to buy men’s accessories and now men are starting to buy women’s handbags, she said. Outerwear and suits figure among key gender-fluid categories. While the concept isn’t new — Vernet cited Saint Laurent’s famous tuxedos for women — “it’s moved from being perceived as subversive to being an accepted part of fashion.” However, when it comes to fundamental structural changes, she cautioned, “It’s important to be able to spot the difference between a passing trend and things that will impact the business in the long-term.”

Elodie Abrial, director of women’s wear at Le Bon Marché, which overhauled its men’s department in 2012, echoed that while the gender-fluid trend has been bubbling up, for now it speaks to a specific and advanced demographic, and not the everyday nonfashion consumer.

She mentioned Off-White’s recent pop-up space for the store’s Logomania event this spring — presenting a capsule mixing men’s and women’s — as being perfectly in sync with the gender-neutral zeitgeist. “Some of the items sold out so quickly that men were prepared to buy pieces from the women’s and vice versa,” she said. Le Bon Marché in 2015 also presented its Le vestiaire volé aux hommes space, based on the whole “boyfriend” concept of women borrowing from a man’s wardrobe.

While the gender-fluid lifestyle may speak to the younger generations, “the older generations are more set in their ways,” she said. “We really have two separate departments and the big majority of our customers still go shopping in the usual way.”

The coed trend is “a small part of the story because even Off-White for its women’s collection has superfeminine pieces. There is still the street attitude on some of the items, but otherwise it’s moving more and more toward hyperfeminine,” Abrial said. “It’s a trend of the moment, we don’t know how long it might last. We still have very feminine brands offering printed silky pieces that are working so well, it would be hard to imagine a day when all of the departments did unisex. The role of the department store is to propose things for all variety of customers and not just one directional trend.”

Likewise, Giulia Pizzato, buying and merchandising director at Milanese department store Rinascente, said while the convergence of trends is particularly evident with the younger brands, especially in the streetwear and neighboring sportswear segments, “it’s really complicated for a department store to adapt since we have different floors for men’s and women’s fashion and also different teams taking care of the buying.”

Rinascente’s Milan flagship boasts an annexed building focused on collections targeting a younger audience “where we can experiment with unisex collections,” and sometimes the same products are bought in different sizes for different floors by different buyers, Pizzato explained, adding that while women are open to the idea of shopping on the men’s floor, “men want to make their purchases in their dedicated space.”

“It’s hard to tell now what the future will be and if in the next few years we will be able to mix-and-match the men’s and women’s offering,” he said.

Roopal Patel, senior vice president and fashion director at Saks Fifth Avenue, echoed that while designers increasingly are looking at items or looks that translate to men’s and women’s, “the fashion houses are still looking at keeping their men’s worlds and their women’s worlds separate for the moment.”

Patel also noted that the synergy between men’s and women’s on the runways is coming from a period of time where we have been seeing the same creative director for men’s and women’s collections. “I think designers are looking to see how, in one moment on one runway, to have as much impact as they can,” she said.

Neil Barrett, who reintroduced a coed collection for fall 2017, doesn’t see his brand as being gender-fluid. “My women’s wear is an extension of the men’s wear, both conceptually and stylistically…they share the same DNA and rely on the very same design approach. But while women’s wear is profoundly inspired by my men’s wear, the men’s wear itself is resolutely masculine and does not borrow from the women’s line,” he said.

Barrett agreed that showing men’s and women’s side-by-side serves to reinforce the brand message. “Weirdly, when I did it over 10 years ago, combined shows were unusual — while now it’s becoming more common, if not the rule. In my case, it made sense already back then — and it does even more now.”

Others see the worlds increasingly merging. “Our world has changed culturally, so the acceptance of this fusion of blurred gender lines and trends is a reflection of that. Coed shows give us the platform to present that within the industry,” said Dan Caten, co-creative director of Dsquared2.

“It’s about switching roles,” Marras explained. “Masculine women, or androgynous, feminine men wearing women’s clothes…in a play of altercation and provocation….We talk about an aesthetic transformation [sparking] a gender revolution enabling people to redefine themselves and become something else, inventing new roles or modifying the idea of seduction.”

Jonathan Anderson, backstage at the presentation of his seasonless show in London in February, spoke of “the need to go forward in an optimistic way, to change things, to make them exciting again.”

“We’re finding that a lot of women are buying men’s — and vice versa — and for me it was about how do we uniform everything, tighten it up together,” he said.

The evolution of relevant new retail concepts on the horizon could point to how the landscape may evolve. A case in point: Galeries Lafayette’s future flagship set to open on the Avenue des Champs-Elysées in Paris in early 2019.

“Gender neutrality will be a big focus,” said Clara Cornet, creative and merchandising director, who prior to being tapped for the project was based in the United States for five years, working with Opening Ceremony and The Webster.

“We should be seeing more gender-neutral merchandising for the seasons to come,” hinted Cornet. “I truly believe that stores should be the reflection of the world we live in and of the evolution of modern society, with the norms becoming more fluid.”