Olivier Theyskens, formerly known as the crown prince of glamorous Goth, is no one-trick pony, as his first full Rochas collection proves. The 26-year-old Belgian, who is as handsome and as charming as Nicolas Ghesquière, is also fully... 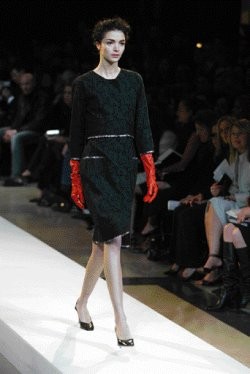 Olivier Theyskens, formerly known as the crown prince of glamorous Goth, is no one-trick pony, as his first full Rochas collection proves. The 26-year-old Belgian, who is as handsome and as charming as Nicolas Ghesquière, is also fully fluent in the stuff of refinement. And the Rochas woman he brought to the runway was a well-mannered sophisticate dressed in appealingly proper lace-trimmed suits, who doesn’t care for a mini anything, except maybe Minim’s.

“There is a place in Paris for a modern product that is reserved,” says Theyskens, taking a break in the busy showroom on Saturday. “We’re missing something that isn’t vulgar.” Evidently, retailers agree. The pre-collection shown during the couture was picked up by, among others, Barneys New York, Saks Fifth Avenue and Jeffreys. Now fall’s polite but mysterious look has editors raving. Theyskens’ bewitching best included looks as narrow as an overturned champagne glass with a cropped jacket in two tiers topping a slim double-tiered skirt. “I love a woman who makes an entrance,” he says, “someone who makes an impression without shocking.”

The house’s archive itself is so slim that Theyskens saw it all in under an hour. No matter. He turned up for his first day with his sketches complete. “Rochas has a known name, but not a known image,” he says. “I was talking about other projects when I took this job, but I know that at another house, I would have been more cold, more economic. Here I’m working with my heart.”

With the designer’s signature line on hold, Theyskens has plenty of time to focus on planning a rosy future for the house, owned by the German cosmetics giant Wella. And nothing is out of the question, even a couture collection. The Paris store will be revamped, a new perfume is in the works and Theyskens hopes to debut an accessories collection in July.

Still, the designer, who started at the house in November and, after four years, closed his own house last year, says he doesn’t want to grow the business too fast. He’s learned from the successes and failures of other young designers charged with bringing an old house to life. “I’ve seen great talents work so incredibly hard,” he says. “I have to take care, because fashion absorbs all that energy so quickly. I want my work here not to turn to garbage after a few seasons.”

Theyskens, who has taken on some of the Rochas politesse, makes taking things slowly seem like good manners. “We are ready,” he concludes, “to be patient.”