Trying New Identities on for Size

Will fantastic themes or authentic takes characterize fashion marketing in the year ahead? 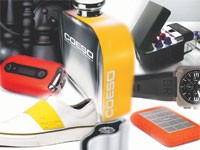 Will fantastic themes or authentic takes characterize fashion marketing in the year ahead?

The answer is both, marketing experts predict. Fantasies will afford an antidote to the sense people have of being bombarded with information daily, while a feeling of authenticity will remind them they are still grounded in the reality of day-to-day life.

The explosion of technology in 21st-century lives is fueling fantasy themes in product design, colors, textures — and these themes are indicative of the way people want to experience some of their time. Words such as slow, dream, myth and intrigue characterize this dynamic, which has been spawned by what brand image developer Cheryl Swanson termed a sense of “collective exhaustion.”

This desire to immerse oneself in fantasy, Swanson said, is stemming from “a fast, complete conversion from a biorhythm to a techno-rhythm. “It has happened at such a fast pace that we don’t consciously acknowledge it,” she continued, referring to life’s changing nature and speed. “Five years and 10 years ago, it was very different.”

Its roots are in the sense people have of being “work automatons,” Swanson said, which is increasingly prompting them to treat themselves to something special — even small, simple things like a nice glass to drink from — and to live in the moment.

In the fashion realm, she noted, this has begun to play out in “experiential” pairings of materials, such as velvet and mesh or leather and metallics (“mixes that are not only structural but sensual”); in “fabric as theater” (such as the “accordion-type fabrics at J. Jill”) and in the re-emergence of layering (signaling “a sense of protection,” as many people have become “scared and a little unsure”).

Fantasy is foreseen unfolding in virtual reality, as well. People increasingly will create identities for themselves in locales like social networking sites such as MySpace — say, by claiming literary or music favorites that may not be their own — and in virtual communities such as Second Life, where they shape avatars that may or may not mirror the way they really are.

In the real world, flexible identities could manifest themselves in people listing skills rather than titles on their business cards or adopting sharply different fashion styles from day to day, depending on the personas they want to foster, Faith Popcorn’s Brain Reserve is forecasting. “The idea is, you’re not tied to one static identity,” noted Kiwa Iyobe, a Brain Reserve trend analyst. “Fashion speaks to that in the way fashion cycles have been sped up.”

In response to this consumer identity flux, brands could start becoming more fluid in their own identities, as well, Iyobe predicted. “Chameleon-like brands will focus less on communicating a static message and more on being the right thing for the right persona at the right time,” the Brain Reserve group is projecting. “Constantly morphing retailers will carry products until they sell out and never restock.”

This phenomenon also may take form in products other than those usually offered by a particular brand. If Starbucks shows staying power as a name associated with quality products and ambience, for instance, it could prompt sizable numbers of people to go to the movies or buy the books it promotes in its coffee shops. (Starbucks’ newest offer of that sort, “A Long Way Gone,” a memoir by first-time author Ishmael Beah, is slated to go on sale in the company’s stores in the U.S. on Feb. 15, the same day it will hit traditional book outlets. Since October, Starbucks has sold 92,000 copies of Mitch Albom’s “For One More Day,” the first book it has offered.)

This year, brand image developer Toniq expects a sense of fantasy to be portrayed in product colors that go from light tints, gray and bluish halos — suggesting a fog-like, shadowy or age-worn aura — to intense, inky blues; liquid silvers, and glowing rays conveying intrigue and a nocturnal atmosphere.

As most people are unlikely to relegate their existence entirely to a fantasy world, authenticity is seen as a growing force in the design and marketing of style-driven goods — not least of all in the localization of brands, predicted Marian Salzman, a trendspotter and executive vice president at JWT.

“I’ve been invited into more conversations in the past several months about how to relocalize brands, versus globalizing brands, the hot button since the Eighties,” than any other topic, noted Salzman, who identified the trend as the most important one for marketers to grasp in coming years. “We’re at the beginning of a very important shift,” continued Salzman, author, with Ira Matathia, of the recently published “Next Now: Trends for the Future (Palgrave Macmillan: $26.95).

“We’ve seen this in boutique messaging,” she added, pointing to players such as beauty brands Kiehl’s, C.O. Bigelow and Lush. “I think we’re going to see it in mass messaging, as well.” Levi’s and Coach are among the big brands for which Salzman sees significant potential in a message that turns on themes of local heritage and a representation of something genuine. Levi’s, however, has no plans to do so in the foreseeable future. Noting Levi’s has featured “SF Cal” on its jeans buttons and rivets since the turn of the century, Amy Jasmer, Levi Strauss’ director of brand presence, said, “We wouldn’t extrapolate that to our ads; it’s so intrinsic. It’s a global brand at this point.”

That a fashion brand like Coach proclaimed its 65th anniversary in its most recent ad campaign (“since 1941”) came as a shock to Salzman, but it also left her wanting to know more. “It doesn’t feel like a big corporate conglomeration,” she observed. “It may be preppy’s anti-bling message. It’s a ballsy thing for them to do.”

Swanson predicted items made of simple, clean materials that increasingly suggest a second skin would gain greater immediacy, as has been seen in Swatch skins, Motorola Razr cell phones and sleek Puma slip-ons, among other things.

While the advent of content sharing and viral potential via Web sites such as YouTube are prompting some brand leaders to rethink the impact of online marketing, Salzman, for one, believes it’s best used at present by niche names. “If you’re H&M, do you belong on TV or on YouTube to drive a message that’s viral?” she asked rhetorically.

Also to be weighed is the relative value of a brand’s exposure at the hands of consumers versus the brand itself owning such images and information. For example, Salzman said, teens recently put up “The BCBG Fashion Show” on a content-sharing Web site, prompting her to wonder how, if at all, the brand “manages that.” A customer, more than a brand itself, could put a brand back into the spotlight, she noted, adding that fashion players reputed to have spent the least annually on advertising often have mounted the most provocative campaigns.

“There’s a gap between how corporations and individuals are processing information; a shift from owning objects into a flow of information,” Iyobe observed in a time marked by digital connections. “There is a tremendous tension over who owns what.”

Then there’s the onset of virtual burnout syndrome in a world where, Iyobe said, being online is “almost unavoidable, so being able to avoid it is almost a luxury.”

“We live in a digital era and it’s just going to escalate,” Iyobe projected. “Certain hotels have services where you can check in BlackBerrys because you’re burnt out. There are BlackBerry orphans, kids who feel overlooked because their parents are so caught up in using their BlackBerrys,” she continued. “Whether it’s a brand opening up in Second Life or advertising in targeted Google searches, we can expect more online marketing.” American Apparel, Adidas, Reebok, Sears, Sundance Channel, IFC, Dell and Sony BMG are among the roughly 60 marketers with a presence in Second Life that are providing content as a means for people to interact with brands.

In such a media environment, Iyobe said, a megabrand such as Wal-Mart, Coca-Cola or McDonald’s could find it powerful to air a blank 30-second TV spot and say, “This half minute was brought to you by X.”

“When companies are coming at you left and right,” she added, “it will be powerful to provide a safe haven.”