ISTANBUL — The green satin mini is part combat, part schoolgirlish gym pleats with a diagonal seam separating the two ideas. Hanging further down the rack, a pale pink sleeveless top is beautifully shaped with a neat set of pleats fanning down... 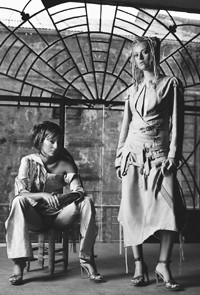 ISTANBUL — The green satin mini is part combat, part schoolgirlish gym pleats with a diagonal seam separating the two ideas. Hanging further down the rack, a pale pink sleeveless top is beautifully shaped with a neat set of pleats fanning down from razor-sharp darts. A series of skirts and jackets is given texture and structure by unfinished strips of material sewn in chevron zigzags on all or part of the garments.

Established in a pristine white boutique-office just down the road from Armani and Gucci in Istanbul’s smart Tesvikiye district, Turkish designer Hakan Yildirim’s ready-to-wear and couture collections make little play of his nationality. They are original, sometimes conceptual, and as far from Asian influence as any New York designer might be.

Yildirim is one of a new breed of Turkish fashion designers trying to break the country’s image as a haven for copycat tailors, derivative, mass market production and ethnic curiosities.

“Ever since I’ve been aware of my own existence I think I’ve wanted to be a fashion designer,” he says, fiddling with the white bandeau wound around his head. “It’s not easy in Turkey. We’re the first generation and in general, people haven’t really understood the meaning of the word design yet. But good clothes can be made in a language that everyone understands.”

Avant-garde designer Umit Unal agrees. He might use Turkish villagers’ colorful flowery prints in combination with high-tech Swiss taffeta, but he has a horror of being seen as an ethnic cliché.

“I don’t like traditionalism,” he says with energy. “I don’t want someone to see my collections and say ‘Ah, there’s a Turkish designer who has taken his ideas from Anatolia.’ I source materials here and my culture is here but what I do is my own. Borders don’t affect me.”

The 32-year-old Unal’s atelier in the trendy bohemian district of Tunel here bears this out. It is like a scene from the backstage of a European opera — rack after rack of what look like theatrical costumes, props littering the floor and sweet music wafting out over the Mittel European-style arcade and cafe below. His creations, based on themes as varied as the journeys of Chinese peasant musicians to gypsy migrations and the Himalayas, may owe much to Anatolian cloth, but could have been conceived anywhere in the world, in any time. His offbeat designs already are being sold in boutiques internationally alongside avant-garde names such as Yohji Yamamoto and Martine Sitbon and, asked about his typical customer, he muses that she would be the bohemian type like the late French sculptress Camille Claudel.

“As a group, I see Turks like the Japanese, the Belgians or the British,” he says, in the fast-paced patter of a true enthusiast. “We are pretty avant-garde, really, and we have talent, a strong past, geography and emotional color — what we don’t have, so far, is a proper system in which to operate.”

That is changing, albeit slowly. Trained in Turkey but for the past few years exhibiting at CPD in Düsseldorf, Germany, and distributing internationally, these designers have ambitions of turning Made in Turkey — a term once so low-end that it would not even be sewn onto garments made here — into a marque of quality and respect. And industry bigwigs are finally beginning to understand the importance of these pioneering, creative minds.

The emergence of Turkish design talent is no accident, and was born largely of the need to reshape the country’s huge textile industry in the face of cheaper competition from Asia. The textiles export body, ITKIB, has been helping the process, encouraging firms to appoint creative talent in a bid to go upmarket, helping stage-manage designers’ forays abroad and sponsoring a young designers’ competition for the past 12 years.

“Turkey has reached world standard now in almost every aspect of fashion,” said Suleyman Orakcioglu, head of IHKIB, the apparel organization that effectively makes up the majority of ITKIB’s membership.

He points out that the textiles scene has changed immeasurably in the past two decades, starting with the explosion of contract work by cheap-labor ateliers, through attempts to capture business from upmarket Western brands with a better manufacturing infrastructure to now, when Turkish companies are taking their first steps toward international branding.

“The Turkish fashion industry is developing and everyone is working with great sacrifice to make this so,” he continues. “Twenty years ago a Turkish designer would not know what to do if he or she went to Paris. Now we have a support system.”

Umut Oran, head of the export group IAF, said Turkish rtw exports last year were about $11.5 billion. The 2003 numbers are expected to show an increase, especially since rtw exports from Turkey in October alone were more than $1 billion, a rise of 35 percent over October 2002.

But only a tiny proportion of the overall figure would be Turkish designer apparel, with the vast bulk of exports in lower-priced, mass-produced garments. This is the challenge facing Turkish designers as they try to raise their international profiles.

This year Turkey had its first home-grown designer taking the stage at New York Fashion Week: Bahar Korcan, a former ITKIB young designer of the year, who is sponsored by ITKIB. This marks a giant leap from past generations of Turks such as Rifat Ozbek, Hussein Chalayan, Atil Kutoglu and the Ege sisters from the Paris-based Dice Kayek, all of whom set up abroad and effectively became part of another country’s design pool.

There are now design degrees available at Turkish universities — one in collaboration with New York’s Fashion Institute of Technology — and the graduates are emerging onto the scene with ever-greater ambition. Yet their feet are planted firmly on the ground. It will take some time before they can beat off competition from the Guccis and Pradas of this world and earn their keep with their small businesses. To help finance his dreams, Unal heads a creative team at Turkish shirtmaker Abbate and holds other consultancies. Yildirim, similarly, is consultant to another shirt brand, Bil’s, while other designers either seek contract work with big firms or use private money to fund their couture and rtw. The textile industry’s efforts to improve quality mean that increasingly such positions are available to designers. Considering how long it took Hussein Chalayan to secure support here, nobody expects a flood of farsighted Turkish sponsors to help them yet.

Arzu Kaprol, whose conceptual, classics-with-a-twist collections have a large following in Turkey, launched in London and New York earlier this year and has put on several shows at CPD. But she acknowledges that things move slowly.

“As a designer in Turkey I feel very alone,” she says. “So few people work in this area — there are barely 10 of us. There is no previous generation, nobody I can say I could emulate, but hopefully we are creating the inspiration for future generations.”

While the designers believe in their own collective talent, they realize that Turkey is a long way from becoming a fashion capital and that they may never themselves become big international brands.

“We are moving forward and none of us has taken a step back,” said Paris- and Istanbul-based Evrim Timur, talking about what she described as the quixotic task of trying to break into the international scene. “Maybe none of us will become the next John Galliano, but we have to keep going so there will be a next generation.”

Timur was talking at a recent seminar run by Turkish Elle magazine about the state of Turkish fashion, which exposed shortcomings in every quarter, from infrastructure, financing and skilled, critical fashion writers to competent, qualified staff and models. Talent is nothing, the designers agreed, if there is such a lack of coherence in the business.

Women’s wear designer turned men’s wear enthusiast Hatice Gokce — who was recently feted in the national press for creating bodies and fur work for fashionable men in a collection exploring the Freudian concepts of id, ego and superego — sharply criticizes the system in which she is forced to work.

“The whole Turkish education system is geared against imagination and toward learning by rote, and whole lives are led without people being aware of their talents — a lot of Turkish creative energy is lost this way, yet there’s no reason why a Turk shouldn’t be as good a designer as anyone else,” she complains. “Cliques and people who aren’t experts stand in judgment while really important aspects are ignored. For instance, I learned by pure fluke at a fair that my designers were very suitable for Italy. It would have been nice if there was a system or people who could do this kind of research and who could advise us — we can’t do everything alone.”

She points out, sadly, that only about three designers managed to attend just one of the seminars at the recent International Apparel Federation’s congress here. The rest of the meeting was reserved for businessmen rather than creative talent.

But, as Yildirim says, awareness is increasing fast.

“The younger generation of designers have a better idea of what they want to do,” he says. “Before us was the tailor generation and there are still many of them, as it’s still a great market — I don’t suppose they’d even want to be designers.”

The younger generation is emerging partly through the ITKIB competition, whose judges include international fashion industry players, writers and Turks from abroad, such as Ece Ege from Dice Kayek. Ege is enthusiastic, pointing out that just a few years ago nobody of any consequence would have bothered to show up at a Turkish event.