Turning Design Inside Out

The idiosyncrasies of everyday life don't infuriate Yves Behar, they inspire him.

By Rosemary Feitelberg on May 27, 2005
View Slideshow 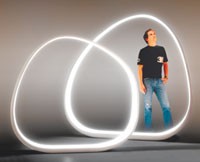 Whether it be the challenge of having a cell phone conversation in a noisy public place or how a cereal box’s defective flap can cause family squabbles each morning, the Swiss-born industrial designer is energized by the way people do things, especially when they use products in unintended ways.

One of his latest creations — a modernist-looking martini glass that can be used right side up or upside down — can be seen in Bombay Sapphire’s current ad campaign. Next month, two more artistic pieces — a “Voyage” light sculpture and a ring-shaped lamp — will make their debuts here at John F. Kennedy International Airport’s Terminal 4 and Felissimo, respectively. Commissioned by Swarovski and Bombay Sapphire, the 2,400-pound curved light sculpture is covered with crystals and filled with LEDs that respond to the movements of passersby. “It speaks of the way we travel around the world and come back to the same point, or the way travel should be — fluid, continuous and uninterrupted,” Behar said.

For “LOVE/Why?” a Design 21 traveling exhibition produced by Unesco and Felissimo Group, Fuseproject, the San Francisco design firm Behar founded five years ago, whipped up the “Inner Light,” two oversized ring-shaped lamps. The aluminum-sided lamps have a paper-thin electroluminescent film on the inner surface of each ring that gives off a radiating light. The exhibit hits Tokyo this month; Kobe, Japan, next month; New York City in August and September, and Paris in November.

Through Fuse, Behar has quietly built a following for his avant-garde designs and nontraditional problem-solving. That might read like a mission statement written by any number of companies, but he backs it up with ingenuity that is tough to top.

Behar decided to fly solo after three years at design firm Lunar and three before that at Frog Design. “There was really nobody fusing together the notion of branding and design. Industrial design has worked in an isolated world of engineering and manufacturing, when it should reside just as much in branding and strategy.”

For Fuse’s new offices, he drummed up the idea of having a long communal table instead of desks or workstations. That way staffers with different disciplines and different levels of experience will work side by side, day in day out.

This story first appeared in the May 27, 2005 issue of WWD. Subscribe Today.

For the next few months, up-and-coming artist Tucker Nichols will mill around the space and sit in on brainstorming sessions, in order to create a mural covered with Fuse workers’ favorite expressions. “We don’t want to take ourselves too seriously,” Behar said.

The irony, of course, is that most of the design world is taking Fuse seriously and has pegged Behar as the wunderkind of its next generation. “We definitely see ourselves as challengers, more than we see ourselves as the established. It is very important for designers to remain that way — continually pushing the boundaries, and progressing and bringing people along to the next thing.”

Behar, who was recently named chair of the California College of the Arts in San Francisco, pocketed the prestigious National Design Award for product design from the Smithsonian Institution’s Cooper-Hewitt National Design Museum last fall. His firm earned five Industrial Design Excellence Awards, which are cosponsored by Business Week magazine and the Industrial Designers Society of America, last year. Hewlett-Packard, Johnson & Johnson, Apple, Target, Birkenstock and Mini are among the brands that have turned to Behar for reinvention. The fact that he is redesigning the cereal box for a brand he declined to identify shows how he is trying to make design interesting for everyone.

A month or two back, he trekked to Anchorage to lecture at the Modern Art Museum, but also talked shop in a frontier bar in Fairbanks. His all-inclusive approach extends to clients as well. Graphic design, automotive accessories and fashion are a few of the fields where he has exercised his design expertise, and aerospace and transportation are two others he would like to explore. “Generally, I like to be surprised by who approaches us,” he said.

Creating more environmentally friendly products is an area that needs some attention, said Behar, noting that European Union members now must consider the full life of a product. Germany is “by far” a leader in this area, considering that its computer manufacturers must produce computers that can be broken down once they are no longer functioning, he said.

Now that several leading executives at companies such as Johnson & Johnson and Procter & Gamble have revealed plans to shift more advertising dollars into research and development, Behar is hopeful that design will play a more primary role in defining those brands. “Companies, more and more, are realizing that the design of a product and the product itself is often the first interaction they have with their consumers,” he said. “Design is a practice that is done from the inside out. We need to think about the substance and the content, and make that palpable and tactile to the people who pick up our products.”

Selling that concept — whether it be to a chief executive or a factory worker — can be a chore, Behar said. “A change in advertising might happen at the top, but a change in design has to happen throughout the company. Most people in large companies are not rewarded for being innovative. They are rewarded for being more efficient and for cost-cutting. But design demands exploration.”