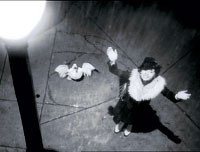 It’s not every TV commercial that can break through the clutter during the Academy Awards, where several of the spots on this list first aired. You need a unique message, captivating images, a trustworthy spokesperson and an appealing product. Then, there’s always sex, which still sells. Victoria’s Secret has that formula down cold with its stable of supermodels ready to strut their stuff at a moment’s notice. J.C. Penney also touched on the subject in its commercial where one lucky guy rides an elevator full of babes wearing new spring looks. Fowl also were a trend in the new round of spots: AFLAC’s clever film noir spoofs feature a duck, while Nextel’s walkie-talkie campaign stars a flock of emus. Burger King focuses on office politics and Diet Pepsi serves up Jason Biggs, a young actor who no doubt captures a youthful demographic.