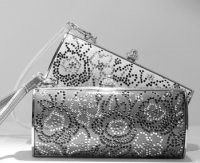 NEW YORK — While they may not always get as much attention as their European counterparts, American accessories companies have a rich history and are key elements in many U.S. stores. Two domestic companies, Judith Leiber and Echo Design Group, are celebrating significant anniversaries this year, and both have a number of developments under way.

JUDITH LEIBER
It’s been a wild ride recently for Judith Leiber, but as it celebrates its 40th anniversary this year, the venerable handbag firm is looking to make a fresh start.

“We are a new company now and we are in the midst of a new beginning,” said Maggy Siegel, president and chief executive officer, who joined Leiber in March.

Best known for its fanciful, crystal-covered minaudières, Leiber was scooped up by Pegasus Apparel Group in 2000, which was later renamed the Leiber Group. That group still owns Klein’s of New York, the trademark for Pamela Dennis and a licensing agreement with Daryl K, as well as Judith Leiber.

Under Siegel’s direction, Leiber is now embarking on a series of moves to freshen up its business and expand its product offerings. One of the few remaining manufacturers of luxury accessories in the U.S., the company has estimated sales of about $30 million.

Among the latest moves is the firm’s new spacious corporate headquarters at 600 Madison Avenue in New York, where it relocated about three weeks ago. Leiber also is scouting locations for a flagship in Manhattan, with plans to open one within the next year, and is in the midst of expanding its product offerings, which now include licensed eyewear, as well as shoes, which were licensed but have just been taken in-house.

Judith Leiber gift items, such as picture frames and silver key rings, will launch this fall; day bags are being reintroduced next year, and other categories are being explored, including jewelry. In addition, a new marketing campaign will bow for fall featuring bold advertisements and will coincide with the relaunch of the Judith Leiber Web site and the debut of a direct-mail catalog.

Siegel, who has held executive positions at Tiffany & Co. and Coach, and was most recently overseeing fine jewelry at Chanel USA, took over the position in March from Victor Lipko. She believes the company could reach sales of $50 million within the next few years.

Siegel joins a brand that has a storied history, which, in large part, reflects the growth of the American fashion industry in the second half of the 20th century. Judith Leiber, a Hungarian native, emigrated to the U.S. in 1947 with her American husband, Gus. In 1963, the duo opened their own company and with their artisan feel, the handbags quickly developed a devoted following. Celebrities and socialites ranging from Nancy Reagan to Kate Hudson have brandished Leiber creations, which are sold now in stores such as Bergdorf Goodman, Saks Fifth Avenue, Neiman Marcus and Bloomingdale’s.

“Judith Leiber certainly created a niche for herself early on that has had long staying power because she offered a bit of whimsy and novelty where it did not exist before,” said Robert Burke, vice president and fashion director at Bergdorf Goodman.

Although she officially retired from the business about six years ago, Leiber will soon be making in-store appearances again on behalf of the brand.

The company factories remain on West 33rd Street. Workers set the Austrian crystal stones by hand, and many styles take weeks to complete.

Overall prices for Leiber handbags range from about $900 to $3,000. For fall, new collections include the Dancing Ladies, a line of wristlet leather and crystal jeweled bags designed to appeal to a younger audience. As part of the 40th anniversary, a limited-edition collection of personalized monogrammed bags will be available at Neiman’s, Bergdorf’s and company boutiques.

To oversee the new developments, Leiber has hired Geraldine Morley, to handle day bags. Frank Zambrelli and his design firm, Design Quadrant, will oversee the production of shoes, and Ruth Raisman will handle the Judith Leiber gift collection. In addition, Wendee Lunt has been named head of licensing and strategic planning.

Siegel also believes the company has potential to increase its distribution in new channels, including independent jewelry stores, and she sees room for growth in the international market, especially Japan, where Leiber has high name recognition, but little distribution.

In addition to its wholesale, Leiber operates five full-price stores, as well as two outlet shops. For its new flagship, the company is scouting locations in the upper stretches of Madison and Fifth Avenues.

Siegel said: “We need a flagship in New York.”

ECHO DESIGN GROUP
As it fetes its 80th year in business, Echo Design Group, best known for its vibrant print scarves, is making a big push into handbags and plans to open its first in-store shop at Marshall Field’s State Street store in Chicago. Though the company won’t be hosting a traditional anniversary bash, the Roberts family plans to hit the road and make personal appearances at stores nationwide to present the Echo brand.

Echo, which was founded by Theresa and Edgar C. Hyman on their wedding day on Sept. 27, 1923, continues to be run by the Hymans’ daughter, Dorothy Roberts — known in the business as Dot — who has been chairwoman and chief executive officer since 1978. The business remains a family affair in other ways as well. Roberts’ son, Steven, is co-president; daughter Lynn is vice president of advertising and public relations, and Steven’s wife, Meg, is a senior member of Echo’s design team.

Over the past five years, Echo has evolved from a print scarf company into a multiproduct, multibrand firm, with a lifestyle ad campaign and a company Web site at echodesign.com. Although it’s based here, since the Fifties Echo has been manufacturing most of its product overseas in such countries as England, France, Italy, China, Japan, South Korea and India.

Echo’s current strategy is steered by growth plans for its accessories and home division, as well as making acquisitions and building brands. Echo manufactures and distributes its namesake brand, which offers scarves, umbrellas, outerwear and home products. The company has home licenses — in bath products; home fabrics and trims; rugs and throws, and bedding products. All products are modeled around Echo’s print scarves.

Beyond its Echo brand business, the company manufactures licensed scarf collections for Polo Ralph Lauren, Lauren by Ralph Lauren, Polo Jeans, Laura Ashley, Gloria Vanderbilt and Adrienne Vittadini, as well as private label merchandise for Talbots, Ann Taylor, Ann Taylor Loft and Coach, and for museums such as New York’s Metropolitan Museum of Art and the Museum of Modern Art.

According to Roberts, the entire group has wholesale sales of $60 million to $65 million.

“We are looking for a solid growth going forward in a quality way,” he said. “We can grow 10 to 15 percent a year.”

Echo acquired Monsac International in 2001 and is now using that company’s expertise in leather goods to launch Echo handbags. Monsac will produce, market and distribute the line, which will be sold in a new showroom next to Monsac’s on Fifth Avenue.

Echo handbags launched softly to specialty stores this spring and will be introduced to department stores in November. The fabric-based line includes top-handle or shoulder bags made with home furnishing fabrics or proprietary fabrics that use Echo scarf designs. The line wholesales for $35 and $65 and Roberts claimed that first-year sales projections were yet to be determined.

The 700-square-foot in-store shop at Marshall Field’s State Street store will open this summer and “is the first place in a store that we will present Echo product as story,” Roberts noted. Based on the success of that unit, the company may consider expanding the concept to other stores and perhaps even a freestanding unit one day, he said.

Lavelle Olexa, senior vice president of fashion merchandising at Lord & Taylor, noted: “As Echo has evolved [in] the business, it continues to expand in importance to us and to the industry. If a new category emerges that’s appropriate for them, they are right there to take advantage.

As for possible brand extensions, Roberts said: “The Echo brand can go where a print, pattern or color can add value…whether it’s swimwear, intimate apparel or shirts.”