It was one of Patricia Arquette's finer red-carpet moments. 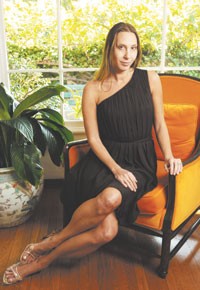 HOLLYWOOD — It was one of Patricia Arquette’s finer red-carpet moments. So it’s not surprising the designers behind the one-shoulder, black chiffon goddess gown the “Medium” star wore to the recent Screen Actor’s Guild Awards have been fielding calls since from other Hollywood friends looking for a dress for this weekend’s Academy Awards.

The creators behind the dress are Jacqui and Rosetta Getty, longtime friends of Arquette’s. But right now, the cousins prefer not to fret about entering the red-carpet race. Instead, thanks to Arquette’s SAG appearance, they’re readying for an appointment with Saks Fifth Avenue in two weeks.

Last week at Jacqui’s Hollywood Hills home, the pair previewed several more recently finished looks from the 25-piece dress collection they are launching under the name Jacqueline Rosetta. (They hadn’t even settled on a name for the line when Arquette debuted it.)

“We debated and debated the use of the Getty name,” said Rosetta as she smoothed out a gray stretch wool dress laid out on the oversized dining table. “We know it’s going to come up. But we didn’t want to rely on it.”

Of their final choice, decided on last week, Jacqui added, “We like the anonymity of it.”

The Getty cousins are only too aware of all that comes with the family name they married into; both of their husbands are great-grandsons of oil tycoon J. Paul Getty. Jacqui wed Peter Getty in 2000, followed a few months later by the nuptials of Rosetta and Balthazar Getty.

Even the personas implied by their social status are always front of mind. They cringe as much at the notion they might be considered platinum card-carrying dilettantes as much as the presumption they share a life or interests like those of the other social girls about town. Yes, they love fashion. And their closets are crammed with Chloé, Yves Saint Laurent, Gucci and Lanvin, while Alber Elbaz and Tom Ford are among their friends.

But the two have long set themselves apart from the others by way of their sensibilities, which are more East Side — or what would be called “downtown” in other cities. Even before meeting their husbands, the pair mixed among the city’s indie music and arts scene.

Rosetta segued from modeling in her teens to living with a music producer in her 20s. During those years, she started a children’s line, Rosetta Millington (her maiden name), which she licensed after the arrival of the first of the three children — now ages 2, 3 and 5 — she shares with Balthazar. The line sells at Barneys New York, Saks Fifth Avenue, Neiman Marcus and other better retailers.

Jacqui was a costume designer on films and music videos, and she continues to style stories for Harper’s Bazaar.

The first time they met, Jacqui’s daughter, Gia Coppola, now 18, was barely out of kindergarten. (Jacqui’s fiancé, Gio Coppola, was killed while she was pregnant with Gia. Years later, Gia’s aunt Sofia introduced Jacqui to Peter Getty.) But it wasn’t until Rosetta met her husband seven years ago that the two women became friends. “We realized right away we have similar tastes,” said Jacqui. “We’re really a couple of boho girls.”

Jacqueline Rosetta is hardly bohemian, however. The collection, wholesale priced from $200 to $1,200, is comprised of chic, simple shapes: a Sixties-era A-line shift, or a second-skin, Fifties pencil dress with capped sleeves and a scoop neck. Boning courses through several bodies, as does a superstrength, full-figure net lining. There are belts, too, in satin and leather, created in collaboration with friend and designer Michael Schmidt.

“We wanted to create classic staples for all women’s bodies — but women of different shapes and sizes,” Jacqui said. “There’s my body and then there’s Gia’s.”

Indeed, mom made sure to offer several styles fit for a younger clientele, in mini versions and without the structured underpinnings. “These kids are obsessed with dressing up,” declared Jacqui.

The cousins’ plan is to take on a partner — either a better retailer or Italian manufacturer — who could help them hit their first-year sales target of $2 million to $5 million. Clearly, this is no hobby for these Gettys.

“We want to do this ourselves,” insisted Jacqui, who sold off a Birkin bag to fund several samples. “It’s like a mom-and-pop business. Well, mom and mom.”