American designers are getting behind Joe Biden and Kamala Harris — as well as other Democratic candidates throughout the U.S. as the presidential race enters its final leg.

The collection features a variety of limited edition products including shirts, totes, sweatshirts, scarves, face masks and jewelry. Offered for sale at store.joebiden.com, the collection is manufactured in America by union workers and retails from $40 to $60.

According to Meaghan Burdick, senior adviser for Biden for President and the project lead, the idea for the fund-raising initiative began in 2008, when designers started making merchandise for President Obama’s campaign, Runway for Change, and continued in 2012 with his Runway to Win initiative. In 2016, designers created merchandise for Hillary Clinton’s presidential campaign.

“We shifted the way you can raise money around merchandise. We were the first campaign to really alter selling merchandise for contributions. Anna [Wintour, editor in chief of Vogue] was the brainchild, and she had this idea in 2008, and we used the model ever since,” said Burdick.

Several designers — such as Wang, Burch, Pean, Wu and Gurung — have been involved in all four initiatives. Burdick said Wintour also gave suggestions of designers they should  approach. “A designer is allowed to volunteer their talent, they don’t do any of the production, and they turn over their design to us,” she said. “We give them overall messaging for the campaign.”

Burdick said she’s proud of this collection because it’s so varied. She recalled that the Clinton collection was a lot more T-shirts, which are easier to make. The initiative produces 2,000 to 4,000 pieces per designer. Each label carries the name of the collection, “Believe in Better,” and says the individual designer’s name.

The merchandise will be on sale through the election. If an item sells out, they’ll try to make more, said Burdick.

Burdick noted that she reached out to the designers in June and July.

“We are thrilled to announce this collection of affordable merchandise designed by a diverse group of talented American fashion designers and made in America,” said Rufus Gifford, deputy  campaign manager of Biden for President. “We are in a battle to restore the soul of our nation, and we’re seeing Americans across the country come together in a variety of ways to support Joe Biden and Kamala Harris because they are the leaders we nee to heal and unite the country. I thank these designers for volunteering their time and talents to help win this election and the hardworking people who brought these designs to life.”

“As a Latin woman that cares deeply about the environment that our children will inherit, it was an honor to create a product for the Believe in Better collection to support the Biden/Harris campaign and to express my professional, personal, and civic responsibility,” Hearst told WWD.

Gurung, who designed  a “Future Stronger in Color” T-shirt that retails for $40, said, “This has been a very exciting project for me as I strongly believe that Joe Biden and Kamala Harris are the leaders we need to overcome the deep wounds that have presented themselves in this country due to the pandemic, and its long history of systemic racism. The T-shirt I designed features the slogan, ‘Future, Stronger in Color’ as I believe that we as a country will be able to emerge from this moment stronger than ever as long as we prioritize unity and equality over hate and division. Joe Biden and Kamala Harris stand for this ideal.”

Cohen, who designed a “Vote” T-shirt that retails for $40, said, “I am very proud to be supporting the Biden/Harris campaign. I wanted to create a design that has a message, but also was beautiful and something you would hold onto forever. Voting is a right that I do not take lightly, and I believe it’s important for us to support everyone’s right to vote. This is why Joe and Kamala’s ‘unity over division’ slogan is one that resonates with me so deeply. Joe and Kamala value diversity in both the physical and in the way we as Americans think, and I’m confident they will bring us together and heal and unite our country.”

Altuzarra spoke about why he wanted to design bandanas.

“The bandana has a long and significant history in American culture. The first bandana in America was actually commissioned by Martha Washington, during the American Revolution, and went on to inspire political campaigns for centuries. It was a symbol of workers’ rights in the 1920s, and women on the home front working in factories during the Second World War would use bandanas to tie up their hair,” said Altuzarra.

“In the 1970s, bandanas were used by gay men as a way of communicating in plain sight for a community that was still largely forced underground. I was interested in bringing back the bandana as a piece of political messaging, and I also wanted to design an accessory that would speak to the moment we are living in: it can be worn as a scarf and as a mask. I am so proud to be volunteering my talents to help elect Joe Biden and Kamala Harris, whose proven leadership can lead us out of this crisis and build our country back together. I believe that they will help unite and heal our country, and make sure our democracy includes everyone.”

“The main focus will be how creative people are using their talents to elevate their support for the campaign and for change,” said Burdick. “The conversation will be about their inspiration and why they volunteered, and what the election means to them,” she said.

In an email to supporters of the Biden Victory Fund, Wintour wrote, “I’m doing everything I can right now to make sure I don’t wake up on November 4 with any regrets, and I hope you are, too. If you’re ready to elect a president and Democrats across the country who can govern, who understand how to get results out of Congress, who can set this country on a path to sustainability — and who put the well-being of others before their own — it’s time to get to work.” 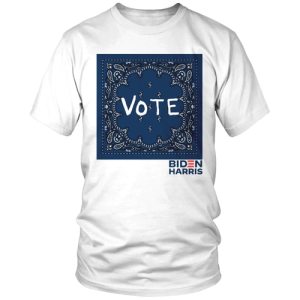 A T-shirt by Tory Burch.