But as she covers... 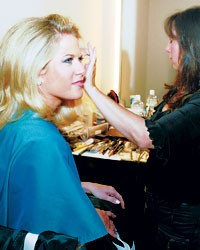 But as she covers the presidential election — and as the network’s only female anchor to have covered both the Democratic and Republican conventions live from the floor — she now knows what it takes to prepare for such major events.

“Luckily, we do have a stylist at Fox, Gwen Marder,” MacCallum explains. Marder prepares a fall and spring trunk show for MacCallum, from which she selects looks for the entire season. In addition to her Escada ensemble, Maccallum’s other convention looks included a fitted black Dolce & Gabbana pants suit with white Coach pumps, and a Diane von Furstenberg wrap dress.

“At Fox, it’s a bit more of a buttoned-up atmosphere,” MacCallum admits, saying it’s part of a professional look. But she’s willing to broaden her style when it comes to events like the RNC. “I wanted stuff that has color,” she says. “I love black, but for a convention you’re looking for something that pops a little when you’re down there [on the convention floor.] A bit more of a patriotic flair.”

While Escada and Dolce & Gabbana may be two of her favorite designers, on the weekend, you’re bound to find this New Jersey mother of three looking a bit more casual, dressed in jeans and boots. And the one article of clothing MacCallum can’t live without is her Angel jeans. “No matter where I go, I bring them with me,” she says.

For fashion role models, MacCallum cites veteran news personality Jane Pauley, and MacCallum’s mother. “Growing up, I always thought that Jane Pauley looked effortlessly put together and professional,” she says. “And my mom has great style, great taste. She’s a beautiful woman. When I was a kid, she had this great von Furstenberg wrap dress. Now that they’re back in style, I wore one to the Democratic convention in Boston.”

MacCallum will cover the election in it’s entirety through Nov. 2nd. She’s already sat down for an interview with the First Lady, and plans are under way for the network’s anchor to nail down Heinz Kerry as well. And what does the news anchor think of the senses of style of our current First Lady, and, perhaps, our next one?

“Laura Bush wears what she wants. She’s a bit more conservative and put together,” MacCallum says. “Teresa [Heinz Kerry] is who she is, too. Her hair might flop in her face, and she doesn’t really care. They dress as they are and it’s a great reflection of their personality.”