Boxers or briefs? The king of Lipstick Jungle makes a final ruling. 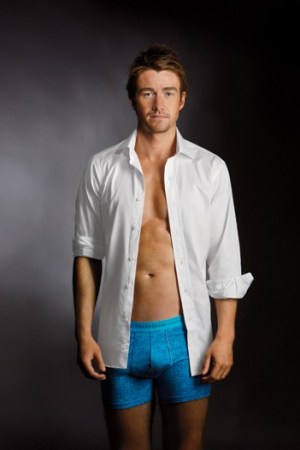 On Lipstick Jungle, Robert Buckley’s character had a torrid affair with one of the female protagonists, who was married, then widowed. It was an archetypal—i.e., shirtless—role in the tradition of Brad Pitt’s breakout performance in Thelma & Louise. But in the show’s second season, the romance has deepened and the character has developed beyond his boy-toy status.

Still, Buckley’s acquaintance with partial undress makes him a natural underwear model.
“It’s flattering, and it makes me laugh,” he says. “I’ll take being objectified over doing PowerPoint presentations any day.”

The actor knows from PowerPoint because he studied economics at the University of California at San Diego and worked as a consultant after graduation.

“I wanted to jump ship on the second day, but I stuck with it for a year and a half. Then I met a woman at a wedding who randomly told me I should pursue acting or modeling. So I did, and a month later I had my first commercial,” he says. “I’m so happy to be doing what I’m doing. Even on my worst day, it beats the cubicle. That job gave me great perspective.”

Now the Californian has settled in New York, where Lipstick Jungle is filmed. The transition entails missing his family, getting used to criticism from gregarious strangers, hitting the gym instead of beaches and mountains, and discovering new realms of fashion.

“I didn’t realize until I was on the red carpet for the series premiere—when I was bombarded with fashion questions—that I knew nothing about fashion. It’s been a steep learning curve, but I do actually enjoy it. In California we have no seasons. Here, all of a sudden, I get to wear winter clothes, and I’m on a show where fashion is a huge component. So I get to experience the gamut of fashion,” Buckley says. His character, Kirby, is finding success as a photographer, and his wardrobe is evolving accordingly.

Buckley cites Calvin Klein, Paul Smith and John Varvatos as his favorite designer labels.
“And I just try to listen for buzzwords. I heard ‘deep, plunging V-neck’ at a party, and I keep reciting that so that I sound informed,” he jokes.

As for underpinnings, he generally prefers briefs in this era of skinny jeans.
“But boxers are so comfortable for lounging. I’m a big lounger. It’s fun getting dressed up for events, but given my druthers, I’m home with a movie and some friends and some takeout.”