Under Armour Shows Feminine Side

Under Armour is launching a multimillion-dollar advertising campaign to let women know it has products for them, too. 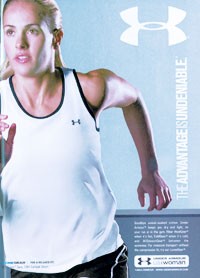 NEW YORK — Fast-growing activewear firm Under Armour is launching a multimillion-dollar advertising campaign to tell women it has products for them, too.

The Baltimore-based company, which virtually created a new segment of the athletic apparel industry with its tight-fitting, wicking compression T-shirts, is rolling out a series of TV commercials, print ads and billboards to showcase its women’s offerings for the first time.

“Women have been wearing our gear since the beginning, but we want to let them know we now have a range of women-specific products,” said Steve Battista, director of marketing.

The TV spots feature U.S. soccer player Heather Mitts in a fast-paced early run through the streets of Baltimore and heading to the gym against a recording of the song “Goodbye Girl” by the band Squeeze. The campaign will premiere during the E network pre-Oscar programming and during shows such as “Entertainment Tonight.” The print spots, also featuring Mitts, will appear in magazines such as People, Shape, Us Weekly,  Cosmopolitan and Lucky, which, like WWD, is owned by Advance Publications Inc.

Kevin Plank, Under Armour’s founder and chief executive officer, told WWD that women’s products are the company’s “biggest growth area.” Women’s accounts for an estimated 20 percent of the company’s overall sales of about $200 million.

Under Armour, which started nine years ago, introduced women’s offerings in 2001, but it quickly pulled them off the market.

“We didn’t have a separate design team and I think we had too many men working on it,” Plank said.

The company tried again with a small women’s line in 2003, and this time it brought on women to help design the collection and focused on differentiating the products from men’s with smaller, female-specific silhouettes.

In the last two years, the firm has built up its women’s looks with colorful and stylish innerwear and sportswear made of compression fabrics and microfiber blends. It offers a large selection of innerwear such as sports bras, thongs and briefs, as well as tank tops, T-shirts, shorts, yoga pants, jackets and mock turtlenecks, all of which are made of performance fabrics designed to wick sweat and moisture and keep the wearer cool and dry. Battista said at the recent Super Show in Atlanta that the company introduced 60 new products for women.

“We now have a team of 30 people devoted specifically to the women’s business,” Plank said.

The women’s arena is one of many growth areas for the firm, a notable success story in the rough and tumble athletic apparel industry dominated by giants such as Nike and Adidas. Founded in 1996 by Plank, a former football player, the company started by making tight-fitting wicking T-shirts to help keep football players cool and dry while they worked out. The brand’s performance products were quickly picked up by athletes in sports such as lacrosse and soccer.

The privately held company makes a range of performance innerwear, sportswear and outerwear, as well as hats, socks and bags, and the mix is expanding fast. While the brand is rooted in performance, it has become a favorite of teenagers who wear it to school and out on the town. The company also has a wide range of deals to supply professional sport leagues and teams including USA Baseball, the U.S. Ski Team and Major League Soccer.

Under Armour has kept its distribution limited to sports chains, independent athletic retailers and outdoor stores, and does not sell to department stores, discount chains or mass retailers.

“We know who we are, and we are a performance company,” Plank said.

Glenn Lyon, president of Finish Line, the mall-based retailer catering to teenagers and young adults, said Under Armour has transcended the performance market. “Many teenagers now wear Under Armour to school as a fashion brand, and not just when they are working out,” he said. “There is definitely a cool factor to it. It’s not the typical running clothes, and young people identify with it. While there is always a challenge for a performance company as to how much fashion you can inject into it and not lose the performance value, Under Armour has done well there.”

The chain has carried the women’s line in some of its stores for the last year, and continues to roll it out to additional locations. The new women’s marketing campaign comes after the “We Built This House” men’s ad effort that showed football players readying for practice. That campaign theme has won advertising awards and was picked up by business leaders and speakers who use it as a motivational theme.

In addition to a new women’s fitness line for fall 2005, the company also is delving aggressively into the running market with a line called Streakers and has introduced a wider range of products for cold weather and styles that have antimicrobial properties, Battista noted.