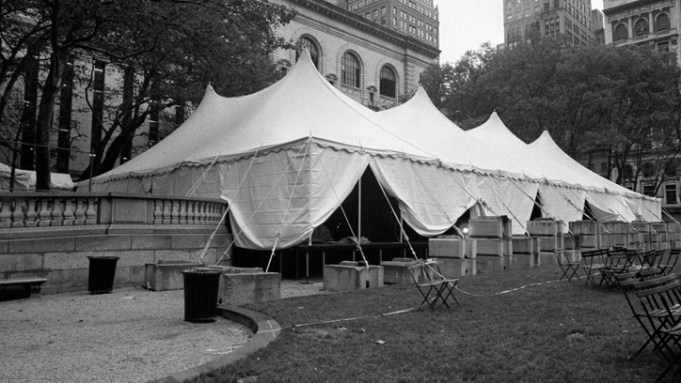 There’s a thin line between love and hate when it comes to the fashion crowd and Bryant Park. Sometimes it’s as narrow as the space between two photographers angling for a shot of Molly Sims, between the bumpers of Town Cars jostling each other at the entrance, or between fashion assistants packed into the standing-room-only section at The Promenade. And as much as we appreciate the convenience, the souk-like atmosphere and the endless product placement can get a little tiresome (even those Evian girls).

However, as IMG unveils plans to relocate to Lincoln Center and the industry struggles to comprehend a Bryant Park-less 2010, here’s a dose of instant nostalgia for the park and the role it’s played in fashion for the past 16 years.

In 1993, the tents were inaugurated on a rainy Halloween with a DKNY runway show. They began with little ceremony: then-Mayor David Dinkins missed both a ribbon-cutting ceremony to open 7th on Sixth and the actual DKNY show, where his seat was filled by one of the label’s staffers. But the spacious tents (the Gertrude Pavilion, which seated 1,100 people, and the Josephine Pavilion, which accommodated 600) were a welcome respite from fashion week’s previous digs. Bloomingdale’s chief executive Michael Gould said, “Anything that gets us out of cramped showrooms is a major plus.” Suzy Menkes of the International Herald Tribune, who had understandably negative associations with showrooms after being clocked with falling plaster at Michael Kors the previous season, gushed that the tents “will transform my life in New York.” She added, “The fashion editors were doing contortions in cramped spaces at their showrooms simply to write down a page of notes.”

Of course, there were some naysayers: “Well, they wanted the Paris tent shows and they got them. It’s as cold and nasty here as it is in Paris,” said Donna Karan. And WWD admitted the tents “were a big success, [but] now it’s time for the clothes to liven up.”

As the seasons rolled on, corporate sponsors began to overtake the event. In 1996, representatives from Apple were ready with demonstrations of “such things as how to get on the Internet.” Free Red Stripe and Guinness beer were offered by advertisers who had clearly misjudged their demographic. Soon, editors could hardly exit a show without being barraged with food, beverages, color touch-ups from Clairol and foot rubs from Dr. Scholl’s. Some grew disenchanted with the circus raging around fashion week’s Big Top. “Where’s the Sbarro?” was the headline for a WWD takedown of the madness in 2003. “The tents at Bryant Park have become a literal bazaar — or perhaps that should be bizarre — of manicures, pedicures, pizza and even doughnuts.” (The doughnuts being a perhaps misguided attempt by Kenneth Cole to woo invitees by placing Krispy Kremes at their seats. WWD also spotted two editors gorging themselves on garlic pizza, “not a welcome sight at 10 a.m.”)

“Such shenanigans don’t raise an eyebrow at the Yonkers Mall,” the article concluded, suggesting the Chanel No.5-scented glamour of the event was long gone.

And then came the celebrities >>

In addition to endless corporate hangers-on, the infestation of celebrities gave the park the appearance of a wildlife refuge, with packs of paparazzi stalking their prey. The definition of celebrity expanded to fit the desperation of p.r. people in some cases, giving us Victoria Gotti front row at Bob Mackie in 2002, and Stephanie March and Elisabeth Röhm doubling up at Badgley Mischka in 2003 (WWD nicknamed the duo “Law & Order: Fashion Victims Unit.”). In 2006, Glamour and DKNY collaborated to charter helicopters flying celebrities to and from Bryant Park, and publicists scrambled for even C-list stars to fill seats. “You know when Angie Harmon’s not going, no one’s going,” said an anonymous celebrity handler.

The tents have been subjected to a few makeovers over time. In 2002, the exteriors were redone in Stephen Sprouse’s stars and stripes design to promote his Americaland collection for Target. In the midst of 2004’s “Queer Eye” fever, Thom Filicia filled the park’s Josephine Shaw Lowell fountain with topiaries and nude mannequins. Allegedly, this was done “to give the idea that they are putting everything else behind them because all they really want to wear are [sponsor] Olympus’ cameras.”

But the move to Lincoln Center isn’t guaranteed to be a success, as the CFDA has found in its experimentation with different locations through the years. An abortive season at Chelsea Piers in 1997 did not sit well with the fashion set. (Menkes cryptically complained the area “doesn’t smell like fashion. It smells like smelly jocks,” and Harper’s Bazaar editors bemoaned the difficulty of finding a cab in the Meatpacking District.) And Hurricane Floyd scared some away in 1999, but its rumblings provided a dramatic backdrop to the late designer Bill Blass’ final show.

Perhaps the only thing more threatening to top editors than the liberal distribution of doughnuts has been the recent onset of bloggers at the tents. Sites like Jezebel.com (which distributed barf bags outside the tents in 2007), Fashion Tribes and Coutorture have increasingly begun covering the shows. “If you’re a junior writer at Vogue, you can’t write a scathing review of Oscar de la Renta,” explained Kathryn Finney of The Budget Fashionista, who spent her 2003 debut in the tents following Robert Verdi and picking up the goodie bags he didn’t take. “I think [designers are] afraid bloggers will expose how ridiculous they are.”

Despite these gripes, there’s plenty that will be missed come 2010. The entrance to the tents always hosted hijinks like Saks Fifth Avenue’s then-ceo Fred Wilson arriving with a flock of goats to promote the store’s “Wild About Cashmere” campaign in 2005. Can Lincoln Center live up to that spectacle? And don’t forget the PETA contingent. Before making peace with the tent organizers long enough to hold a press conference in the lobby in 2003, protesters threw a tofu cream pie at Michael Kors, causing collateral damage to front-rowers like Anna Wintour and André Leon Talley. “It’s like getting in a bar brawl at these things,” groused Blaine Trump. “Gross,” said Sarah Jessica Parker as she examined her tofu-covered hair.

While they may have been gross at times, the tents — crowding, antics and all — will be missed.