Low-rise pants have had an unintended but far-reaching impact on men's underwear: the proliferation of boldly colored and heavily branded waistbands. 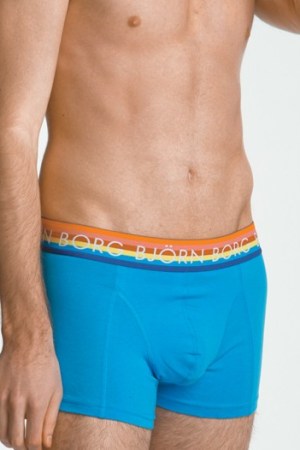 Low-rise pants have had an unintended but far-reaching impact on men’s underwear — the proliferation of boldly colored and heavily branded waistbands.

This story first appeared in the April 9, 2009 issue of WWD. Subscribe Today.

In the last two years, as men’s underwear continued to evolve as a fashion accessory, the two-inch elastic strip that tops undergarments has become a focal point of design and marketing. The waistband — originally tasked with the humble job of keeping the garment on the hips — now functions as part billboard and part design lab, where underwear companies experiment with color and pattern, new printing techniques, larger widths and oversize logos.

“Instead of a functional component, the waistband is a marketing platform and a canvas for real design,” said Bob Mazzoli, chief creative officer, Calvin Klein Underwear, a division of Warnaco Group Inc.

Calvin Klein, the leader by volume of the designer underwear market, was among the first to play with waistband treatments. Its Steel line, launched in fall 2007, features a wide, silver waistband that has the Calvin logo stamped in contrast colors.

The collection set the industry standard as companies rolled out underwear ranges with wider elastics and enlarged logos in colors designed to be noticed.

Other companies dressed up their waistbands using new techniques. The brand 2xist used a new printing technology to create the ombré effect and tropical colors of its current spring collection. The new fall range uses the same technique to colorblock the waistband with metallic and autumnal hues.

Across-the-board, companies with a stake in the fashion underwear market are ditching simple waistbands and tonal logos — long the standard of underwear elastics — for multicolored stripes, neon colors, patterns and even texture. Calvin’s new program, launching this fall, features a logo in raised lettering.

“We’ve seen waistbands completely transform since we started,” said Michael Kleinmann, president of Freshpair.com, a leading underwear e-tailer. “They used to be pretty basic, but now they are like sneakers: their fun colors and patterns say something about the guy that is wearing them.”

It’s no coincidence that the advent of articulated waistbands mirrors the shift of underwear from a commodity to a fashion accessory.

That shift has its roots in Marky Mark, aka Mark Wahlberg, whose steamy ads for Calvin Klein in the Nineties catapulted designer underwear into the American zeitgeist.

With his cocky attitude, hip-hop fame and a ripped physique, Marky Mark turned men’s underwear into an aspirational product that connoted power and sex — associations forever tied to Calvin Klein thanks to the jacquard logo that rimmed Marky Mark’s cotton boxer briefs.

In Marky Mark’s ads for Calvin Klein jeans, the brand’s underwear was always showing, the waistband and its logo clearly visible. Those ads helped reinforce the waistband’s role as a marketing vehicle.

“Innerwear has come out for men,” said Marshal Cohen, chief industry analyst for The NPD Group. “Brands have recognized that the waistband has become a great billboard.”

“It’s like when you buy a pair of sunglasses and they have a huge logo on the side,” said Lucio De Carvalho, vice president of design for Isaco International Corp., an underwear manufacturer that owns the Papi line and produces other collections under license. “Guys like a thicker waistband with a large logo because they identify with it and want to display it proudly.”

Contemporary pant styles over the past 20 years have abetted this trend. From low-rise designer jeans to the free-falling saggy trousers of hip-hoppers, men’s underwear has become an increasingly visible part of a man’s wardrobe.

“Seeing somebody with jeans that fall just below the waist to the point where the underwear shows is part of our cultural vernacular,” Mazzoli said. “It’s something we consider in the design process.”

Executives at 2xist concede that there is a bit of exhibitionism at work. “Everyone is wearing lower-rise jeans where the underwear peaks out,” said Jason Scarlatti, the company’s creative director. “It’s bragging rights for the customer. It says, ‘I paid good money for this.’”

If the branding on the waistband telegraphs status and sex appeal, omitting it can be bad for business. Björn Borg, a European innerwear line named after the retired Swedish tennis star, tried replacing its written logo with a tennis ball icon recently.

“But you couldn’t tell where the underwear was from or who made it and our consumers told us: ‘We want the ones with the name on it,’” said Rocky Brennicke, communications manager for Björn Borg, which launched in the U.S. last year. “The Björn Borg logo far outsells the tennis ball logo. It really showed us that our consumer wants to advertise the brand.”

For market experts, the move to highly wrought elastics is just new evidence of an old phenomenon.