Some designers surprised their audiences this season by doing everything from using a cast of Fellini-esque models to showing uncharacteristically subdued looks. 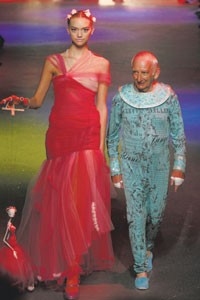 Some designers surprised their audiences this season by doing everything from using a cast of Fellini-esque models to showing uncharacteristically subdued looks.

John Galliano: “Everybody’s beautiful in their own way.” John Galliano plopped copies of Ray Stevens’ schmaltzy lyrics in the seats at his show on Saturday night. It’s time to realize that beauty lies in the eyes of the beholder. That must mean a casting of all kinds of people, not just tall, skinny models — get it?

So out they came, all tricked up in campy carnival tawdriness, an older woman-oily young stud pairing followed by a glamour girl and geezer sugar daddy; a Mr. and Mrs. Jack Sprat zaftig woman-skinny man set (if Jack were a sleazy circus aerialist); three sets of twins, including bros in sheer, do-note-the-family-jewels dresses; and on and on through odd-couple duets of glamazons, lesbians, cross-dressers, punks, pimps, waiters, soldiers and grand dames, ending with the bride and groom, both little people. The result was Fellini-esque sans the obvious empathy. It also lacked the lavish romance of past Galliano extravaganzas, including his Dior couture homeless collection.

Not that Galliano was making fun of his subjects; rather, it was tough to discern what exactly his point was. Still, many in the audience found it marvelous, seeing it as a welcome respite from two weeks of mostly boring European shows. Yet therein was the rub. For those neither captivated by the spectacle nor moved by the message (at least a few in the crowd took offense), the whole thing was a flop.

The clothes? Beautiful indeed. But in the midst of so much showmanship, they made for a mere sideshow to the main event.

Hermès: No one thinks of Jean Paul Gaultier as one of fashion’s shy types. Yet the spring collection he showed for Hermès was subdued from the very first exit — a white draped shirtdress. His safe seaside clothes included suede jackets with open work seams and a bounty of colorful cardigans. He showed linen blazers and carefully tailored pants, as well as plenty of demure pleated dresses. And all of it was put together with a nostalgic Deauville propriety.

This approach was either soothing or annoying, depending on one’s view of what the megaluxe house should bring to the runway. But the beautifully-made haute bourgeois mix is sure to please Hermès’ more conservative customers. Meanwhile, a logo lace send up — slim skirts and camisole tops veiled with the house’s iconic capital H — played like a practical joke. For those who expect more from Gaultier — and from Hermès — the collection lacked that essential spark of personality.

Chloé: Phoebe Philo is one of the hottest, most-copied designers in fashion, having infused girlish dressing with a whole new savvy. Given that her engaging signatures are all over the contemporary market and beyond, she made a deliberate choice to shake up her m.o. a bit for spring.

That said, Philo has no intention of conceding to her copyists the realm of comely ingénue clothes with a soupçon of attitude. Rather she sought to deliver the mood within a different context, one with more structure and less fluff. In some respects, she succeeded well, at times charming with a group of pristine white frocks — confections in linen, organza and metal gauze with newly stiffened embellishments. She went even cleaner with some shirt-and-skirt looks — necktied, ladies? — and an ultraplain two-tone shift. She toughened up the whole package with high, sturdy shoes and another fabulous bag — a big, multizipped shopper.

Not content to just control the frills, however, Philo also went for statement structure. When she did, the clothes turned instantly labored with a major clunk factor. One could just sense the effort behind the light brown jumper over a yellow blouse and the cardboard-stiff gold duchesse skirt with an organza blouse. Nevertheless, Philo had the smarts to move on fast, long before finding herself in a where-next rut. Whatever growing pains result will be well worth it.

Christian Lacroix: A runway covered in sand at the Beaux Arts didn’t exactly scream Miami. Yet it indicated a new attitude at Christian Lacroix, in the house’s first full season under the Falic brothers’ ownership. Change came fast, Lacroix’s signature and Bazar lines now rolled into one.

But that’s not all. Those in the audience who wondered how the stilettoed models would negotiate all that bumpy sand had their question answered with the first look out — flats, a styling shift that spoke volumes about Lacroix’s own shift in mind-set. Under LVMH, he remained ever resolute in using his runway for full-flower expression of his eccentrically artistic proclivities. Only last season, did he tone down the exuberance, then due in part to a transition-phase shoestring budget. Here, he set forth more of a platform for the house’s future, reining in his typical flourishes to a degree that startled at first, yet played out as a lovely sojourn to a more-familiar bohemia.

Pretty dresses formed the core of the collection: strapless prints for a boho garden party; clean-lined, artsy knits and wrap dresses, a spare Sixties gem jazzed up with flowers and embroidery. Lacroix folded in plenty of tailoring, as well, including a fabulous, full-cut red metallic trenchcoat, and went unabashedly sweet with girlish pink eyelets. It all looked lovely in a newly grounded, less precious way. If in so doing Lacroix sacrificed a little romance in the name of restraint, he put the clothes in a more obviously accessible context. His challenge in developing the business will be to work a balance that remains true to his core.