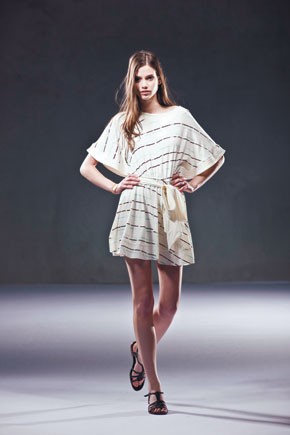 Jabour’s collection of four dress styles arrives in stores this month. The designer created a bubble dress and boatneck dress in sophisticated prints. She also designed a low-waisted tunic and sleeveless top to be worn with jeans. Hamilton’s men’s collection also hits stores this month. In May, Wang’s color-blocked pleated dresses and tucked sleeveless dress will be available, as well as Dager’s bright separates for men.

Items in the capsule collections range from $29 to $79. Each will remain in stores for one month and will feature eight looks. The items can be mixed and matched within a collection and complemented by other Uniqlo products.

In the past, the Japanese casualwear retailer tapped Lutz & Patmos, Kino, Alice Roi, Phillip Lim and GVGV to design capsule collections for the Designer Invitation Project, which was launched in conjunction with the SoHo store opening in 2006.

“I [am happy] to continue this extremely successful initiative for Uniqlo,” said Yuki Katsuta, president of Uniqlo Design Studio New York. “I am…confidant this season will be just as successful as the past seasons.”

Uniqlo is not alone in presenting designer capsule collections. Hennes & Mauritz has generated buzz for collections by Karl Lagerfeld, Stella McCartney, Viktor & Rolf and Roberto Cavalli. The supply of product usually sells out the same day. Target brings young designers such as Erin Featherston and Jovovich-Hawk to the masses through Go International.

Uniqlo is owned by Fast Retailing Co. Ltd., whose other brands include Comptoir des Cotonniers in France and One Zone in Japan.