After abruptly shuttering the bulk of its U.K. stores four years ago, Uniqlo is back. The Japanese casual fashion chain, owned by Fast Retailing Co. Ltd., on Wednesday opened the doors of two Oxford Street units... 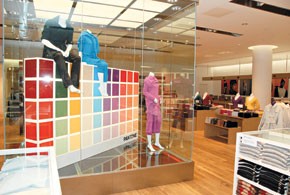 LONDON — After abruptly shuttering the bulk of its U.K. stores four years ago, Uniqlo is back.

“London is the Olympics of the retailing world. All of the major players are here,” said Tadashi Yanai, chairman, president and chief executive officer of Fast Retailing, which his family founded. “Those who succeed in London are winners worldwide.”

The openings mark Uniqlo’s first major footprints in the European market. Next up is a small “antenna shop” that will open in La Defense, Paris, early next month. That unit will be Uniqlo’s first on the Continent.

The London flagship is a first for Uniqlo. When the Japanese company debuted in Britain in September 2001 it was with a string of 5,000- to 10,000-square-foot stores scattered around the British capital, in the suburbs and smaller cities. The focus then was on rapid growth, with plans to open 50 units by 2003 and move into profit by the third year. But that never happened, and in 2003 Uniqlo revealed plans to shutter 16 of its British stores, leaving just five open — all of them in London.

At the time of the closures, retail analysts argued that while gross margins were good and the financial model was sound, the Uniqlo product was too bland, and could not compete in a city famous for its relatively cheap, cutting-edge designs and vibrant, street fashion culture.

“At the time, Uniqlo had been so fantastically successful in Japan, they thought they could expand worldwide — regardless of local tastes,” said Edward Whitefield, chairman of MHE Retail, the London-based consultancy.

“But, in the end, what they were offering was a very basic product and they learnt the same lessons as Gap,” he added. The chain is thought to have posted losses of about $25 million as a result of the U.K. closures.

Yanai, who founded the Uniqlo chain and opened the first store in Hiroshima, Japan, in 1984, said things would be different this time around. “In the past we focused on building up a store network as quickly as possible — but without a flagship store to be our showcase,” he said. “Now, we’re looking at opening large-format stores in metropolitan areas in order to show the best of Uniqlo to the world. We hope the fashion and product will be appreciated, and that growth will come organically.”

A year ago, the company opened its first Manhattan flagship at 546 Broadway in SoHo, a 36,000-square-foot store that is the chain’s largest unit outside Japan. A Paris flagship will follow within the next two years, Yanai said. The small antenna store in London will be used to test the market and trading in euros.

Although Yanai declined to give full-year sales projections for the new British stores, Fast Retailing has said it is expecting total overseas sales for the fiscal year ending in August 2008 to reach 30 billion yen, or $262 million.

By 2010, the firm projects sales of 100 billion yen, or $873 million, from overseas operations. The brand has about 760 stores worldwide. Since 2003, Uniqlo has worked at giving its clothing more of a fashion edge, such as by collaborating with designers including Lutz & Patmos, Phillip Lim and GVGV on capsule collections.

Since its London closures in 2003, it has also opened a design studio in Tokyo (previously, the design staff was part of the merchandising department) and satellite studios in Milan and Paris.

Uniqlo has also made a concerted effort to embrace the spirit of London at the new stores. In-store styling has been done by Nicola Formichetti, fashion director of Dazed & Confused magazine, and the latest issue of Uniqlo’s magazine, Paper, features commentary by Dazed co-founder Jefferson Hack; gallerist Max Wigram (who is also the husband of designer Phoebe Philo); actress Samantha Morton, and stylist Katy England.

Collaborations include a capsule collection by the English designer Adam Jones, while a clutch of limited edition T-shirts (all sold in plastic canisters stacked against a wall on the ground floor) have been created in collaboration with East London talent including Gareth Pugh, Kim Jones and Carri Mundane of Cassette Playa.

The store, a former Waterstone’s bookstore, has been designed by Masamichi Katayama, the founder of Wonderwall. It spans three floors with a mix of men’s and women’s fashion, the T-shirt wall and a rainbow of Pantone-colored cashmere knits on the ground floor; men’s fashion on the lower-ground, and women’s upstairs.

The interior is spare and streamlined with materials such as steel, glass and blond wood. Glass clothing display tubes span the three floors, and media screens with Japanese wording and product flash on the walls.

“Before, it was all very casual and a lot of fleece,” said Simon Coble, Uniqlo’s chief operating officer, based in the U.K. “Today it’s a much more fashion product hanging alongside the denim and cashmere. And there is a strong emphasis on great fabrics and colors.”

As well as creating buzz. The opening party Wednesday night drew the likes of model Ben Grimes, her boyfriend Jackson Scott, Chloe and Poppy Delevigne, Meredith Ostrom, David de Rothschild and Lady Gabriella Windsor. Skinny-jeaned rockers, young aristos and East End hipsters rocked out to music by rapper Dizzie Rascal and Daisy Lowe — another multitasking model — acted as guest DJ for the soiree. Grimes showed off her new hairstyle. “My friend and I were watching ‘Léon’ and I wanted to look like Natalie Portman, so I cut it,” said the British model, flicking her freshly cropped bob. “Yep, I modeled my hair on a 12-year-old girl.”

NEW YORK — At its SoHo store here, Uniqlo presented its spring collection on Tuesday evening. Shorts suits, loose Ts and suspenders gave the hipster collection a boyish bent, but feminine pops of color on scarves and jackets, not to mention an occasional dress, added a touch of girliness.