The collections will be housed in existing stores in departments of at least 3,000 square feet. 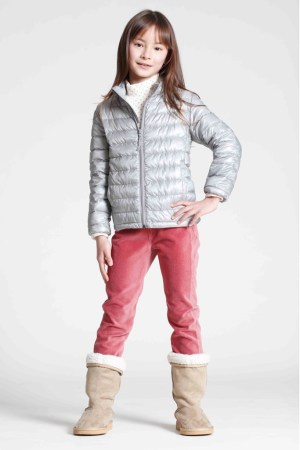 NEW YORK — Uniqlo this fall will launch its baby and children’s collections in the U.S.

The lines will be housed in existing stores in departments of at least 3,000 square feet, said Shin Odake, chief executive officer of Uniqlo U.S. With sizes from infant to 14, prices start at $5.90 for boys and girls innerwear. Heattech items start at $7.90, denim, $19.90, and synthetic down jackets similar to the adult premium down ultralight collections, $29.90.

“We didn’t carry the kids Uniqlo line in the U.S., but we’ve had the kids line in Japan and other countries” said Odake. “At first, we had only one store in SoHo and there were not a lot of familiarities. Mostly the SoHo customer is younger and not many people come shopping together with children. We have to determine whether it makes sense to carry it in SoHo.”

Odake has decided that it makes sense to carry children’s wear at Uniqlo at 31 West 34th Street and the flagship at 666 Fifth Avenue here. Uniqlo Kids won’t be sold in the San Francisco store, a spokeswoman said. But it will bow at Uniqlo’s newest store, a 43,000-square-foot unit at Westfield Garden State Plaza in Paramus, N.J., which will have a separate dedicated street entrance and a prominent facade. It’s the company’s only mall location in the U.S.

Uniqlo in March introduced Jun Takahashi’s Undercover label, UU Uniqlo Undercover, for men and women. There’s also a small collection for children, including 27 items for kids, and five for babies. “Uniqlo Kids is going to be a fully designed collection and much broader than UU,” said Odake. “We’re going to have enough styles to create large departments in the stores. For UU, we only had a couple styles. UU is a little more edgy. It’s part of Uniqlo’s collections and is a designer that we carry. Uniqlo Kids will have more basics than UU.”