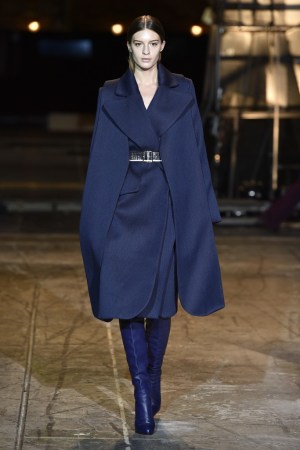 COPENHAGEN — A positive mood reigned at Copenhagen Fashion Week that ended its five-day run on Sunday, since exports, especially to the euro zone, were up. Buyers praised the region’s focus on men’s wear, its design talents and the cool street-style scene.

Total exports of Danish fashion, which account for 60 percent of the Danish fashion industry’s output, rose 8.3 percent in 2014 to 24.5 billion Danish kroner, or $3.73 billion. Exports to France and Italy were up 25 percent versus 2013.

“There is this unusual situation where southern European countries are driving growth, while exports to Scandinavian countries are decreasing,” said Michael Hillmose, head of international affairs of Dansk Fashion and Textile, the trade association for Danish textile and clothing companies.

This offset the 4.5 percent drop in domestic sales in 2013 last year. The Danish industry was up 3.5 percent in 2014. Currency conversions are calculated at average exchange for the periods concerned.

“The currency situation is putting brands under pressure as production costs — mostly in dollars — are going up. Meanwhile, the Swedish krona is down 10 percent and the Norwegian krone is down 20 percent so it’s getting more difficult to sell to Scandinavian countries,” Hillmose said.

He said the country has lost 1,000 stores in the last five years and a shift of consumer spending to the Web benefits mostly the U.K. and German e-tailers. “Danish Web shops find it hard to compete with foreign Web shops,” he explained.

He noted a small decline in exports to Russia. “It is getting more difficult to sell to Russia. The embargo on EU products isn’t on clothes. Companies that are able to do it are now shipping directly from countries outside Europe to Russia to avoid ‘red tape.’” Fashion exports to Russia are about 200 million Danish kroner, or $30.5 million.

“We are seeing a new era in Danish fashion. For the last couple of years, it has been very functional minded, but now it’s also very beautiful,” said Marie Louise Wedel Bruun, deputy editor of Elle Denmark.

The Copenhagen fair’s landscape has seen a major reshuffle, with the creation of CIFF Raven dedicated to men’s wear in the former Gallery location, in addition to CIFF at Bella Center and Vision being replaced by Revolver, split in two locations, in Vision’s previous venue, Øksnehallen, as well as in the fish market district.

“It is quite interesting to see CIFF Raven enhance the focus on men’s wear in Copenhagen,” said Eva Kruse, chief executive officer of Copenhagen Fashion Week. “It’s very relevant. Some of the most interesting brands coming out of Scandinavia this year are men’s wear labels such as Soulland, Henrik Vibskov and Han Kjøbenhavn.”

Kruse trumpeted a color palette of burnt orange, bordeaux and dark blue, and a lot of fur, especially sealskin. “We are a fur-loving country,” she said.

There were 30 women’s and men’s labels showing this season. Danish model Caroline Brasch Nielsen walked the Ganni, Designers Remix and By Malene Birger runways this season.

Crown Princess Mary of Denmark sat front row at a number of shows including Ole Yde, Mark Kenly Domino Tan and Ganni. Sporting an Edith & Ella dark blue silk dress and Ole Lynggaard jewelry on Friday, she also paid a visit to CIFF Raven and The Jewellery Room, an exhibition on the sidelines of the fashion week, now in its fourth edition, and to the design student collections Designers’ Nest.

Other local labels were absent from the Copenhagen schedule — Anne Sofie Madsen is to show on the schedule of Paris Fashion Week on March 3; Soulland showed during London Collections: Men in January and is to show again in London next season; Wood Wood and Stine Goya are skipping catwalks — and Henrik Vibskov showed both in Paris and Copenhagen.

“I was impressed by the diversity of the type of trade shows in Copenhagen and the wide variety of brands here,” said Jesse Hudnutt, men’s wear buyer at Opening Ceremony. “CIFF Raven was the most well-curated, and the setup allowed for more intimate interaction between brands and retailers compared with some of the larger trade shows. At Revolver, I found a really cool, local Copenhagen-based brand named Unsung. I liked the imagery of their look book, very Nineties, like early David Sims. That was a gem, and they don’t yet show outside Denmark.”

Hudnutt also praised the city’s street-style scene. “It was very cool to see what people are wearing. Everyone seemed very smart and tuned in in terms of sportswear: the Nike baseball cap, the Raf Simons hoodies…The kids at Wood Wood [the brand hosted a cocktail event at the store to celebrate its collaboration with Champion Select] had really good style.”

Zachary Ching of VFiles store on Mercer Street in Manhattan said Japanese label Sasquatchfabrix was a standout at CIFF Raven.

“I buy a few designers here,” said Barbara Maj Husted Werner, owner of Holly Golightly, a luxury fashion retailer in Copenhagen that carries labels such as Acne, Marni and Rick Owens. “We have T.A.C., a label designed by Tatiana Andersen Camre, who graduated from Central Saint Martins. She is very good with prints. We are also buying key pieces from Stine Goya; she has a strong collaboration with Danish well-known painter John Kørner for fall. We follow Freya Dalsjö. We don’t buy her yet, but we’ll look again. Her expression is very strong so now it is just a question of getting the production right. Saks Potts, a small fur label, is selling really well for us.”

New York-based designer Telfar Clemens had a booth at CIFF Raven where he presented his unisex collection. “Denmark is an unventured territory for me. It is a really good market,” he said. The designer is getting ready for his show on the schedule of New York Fashion Week on Feb. 15. “It involves intricate knitwear, four colors and belt loops that are pockets. I am obsessed with pockets.”

CIFF at Bella Center had 1,600 companies exhibiting women’s and men’s wear brands and a unisex area. “As of next season, we want to bring a young brother to Raven, Performance, for fashion-forward technical sportswear brands,” Andersen said.

Revolver, the brainchild of Christian Maibom, had 350 exhibitors including designer brands such as Dalsjö, Soulland and Asger Juel Larsen. The fair doesn’t disclose visitors’ numbers. Maibom said he was happy with the first edition and that 72 percent of visitors came from Scandinavia.

A jury of designers — including Eyes on Talents’ cofounder Guillaume de Piédoüe d’Héritôt, Henrik Vibskov and Lala Berlin designer Leyla Piedayesh — selected Rolf Ekroth, a student at the Aalto University of Design in Finland, as the winner of the fair’s Designers’ Nest competition.

“We liked his way of working the materials. He is working on the Antarctic and the landscape [theme], with really nice color references and hues,” Vibskov said. The designer said showing during New York Fashion Week could be a good fit, in addition to Paris and Copenhagen. “How many shows should we do?” he said with a laugh.

After Vanessa Bruno last year, it was Nathalie Rykiel’s turn to visit Copenhagen Fashion Week. The vice president of the Sonia Rykiel board was wearing a plum marabou fur vest at a cocktail hosted by the French ambassador François Zimeray in her honor at the embassy.

“I was very moved to see that French-speaking people here have read my books,” said Rykiel, who most recently released a tome on elegance. “I write more and more, and it has become very important to me,” she told WWD. For her three-day trip, she brought “fur, fur and fur. It is the country!”

The next Copenhagen Fashion Week is to be held from Aug. 5 to 7.