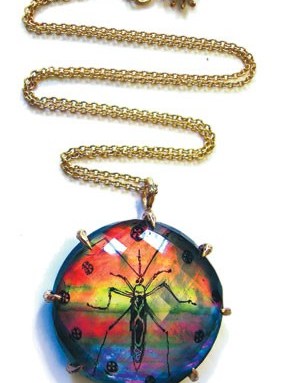 LAS VEGAS — The rich are still spending when it comes to fine jewelry — it’s everyone else who seems to be feeling the pinch.

While there continues to be strong demand for one-of-a-kind jewelry pieces that sell for more than $10,000, jewelers are scrambling to hold on to middle market customers as spending slows and job losses mount. Several companies, such as Gurhan, Anthony Nak, M2 by Mary Margrill, Leslie Greene and Stephen Webster, have augmented their 18-karat gold and gemstone lines with collections in sterling silver. Some firms are even signing deals with mass merchants such as QVC, HSN and Target, as Dominique Cohen did last year.

Talisman Unlimited, the two-year-old California fine jewelry firm founded by husband and wife Michael and Lisa Pitkow, has partnered with HSN to develop a line dubbed MichaeLisa. The Pitkows did their first HSN show on April 23, during which they sold 2,000 pieces in 48 minutes. Prices for the line, which is done in Technibond, HSN’s version of gold-plated metal, with cubic zirconium looks remarkably similar to the firm’s fine jewelry line sold at stores such as Mitchell’s of Westport from $560 to $4,000.

“You can’t tell the difference between the real and the Technibond,” admitted Lisa Pitkow.

Michael Pitkow said the high-end business is doing well, but even at that level there has been a slowdown.

“They might not buy as many pieces [as before],” said Pitkow of his client base. “But they are looking for a great piece.”

Robin Rotenier, the Manhattan-based French jewelry designer, is doing a separate line for QVC. The 14-karat gold-plated QVC line is based on motifs in Parisian architecture and ranges in price from $50 to $250. His signature collection retails from $295 to $3,800. Rotenier’s Rr 2 Rotenier QVC line made its debut April 3.

“QVC is the best thing we ever did,” said Anthony Camargo, who founded Anthony Nak with women’s wear designer Nak Armstrong.

The Austin, Tex.-based brand is still producing its-18 karat and gemstone line, but has tightened distribution.

“Now we get to pick and choose who we want to do business with,” said Camargo. “We didn’t have that freedom before QVC.”

Industry executives at the recent JCK and Couture fine jewelry trade shows in Las Vegas differed on the downstream effect of appearing on a network like QVC or HSN. Some said it could tarnish a brand’s business at the high end, but others contended growing into these venues is smart diversification.

“The barriers have been changed, you can sell in more than one market,” said Andrew Jassin, managing director of consulting firm Jassin-O’Rourke Group LLC. “Why not have a marketing strategy where you copy yourself before it gets into larger distribution? Good marketers understand that. It pirates your business, but it’s going to be pirated anyway.”

Jassin said while diversifying is wise, designers representing their lower-priced line on TV or in other media could harm their image at the high-end.

Other firms are banking on the silver lining. Stephen Webster, the British fine jewelry firm that launched a silver collection exclusively with Neiman Marcus in 2007, opened up distribution to other retailers this year. The brand is promoting the line with a print advertising campaign featuring Christina Aguilera. The collection retails for $500 to $2,500, far less than Webster’s traditional gold and gemstone pieces that can go up to the tens of thousands of dollars.

The silver collection “has a very chic feel to it,” said Webster chief executive officer Terri Eagle, who is also ceo of Garrard, which is owned by a newly formed holding company related to Ron Burkle’s Yucaipa Cos. “It’s for a customer who loves Stephen Webster that didn’t have access to it before. Young people want cool stuff.”

Eagle said the demand for fine jewelry is still there. The goal for the silver collection is 200 doors, while fine jewelry will stay steady with distribution in 60 doors.

Scott Kay launched a silver line for men at Couture. Gurhan, which uses only pure 24-karat gold or platinum in its jewelry, has introduced a blackened-silver collection. The silver line has details with 24-karat gold, so it still has a luxe feel.

M2 by Mary Margrill also launched a silver line with some gold and diamond detail.

“The cost of gold is really going up,” Margrill said. “It’s really a hindrance for some people.”

David Yurman, which has its foundations in silver, has extended to gold and some diamond jewelry in recent years. This year, however, represents a revitalization in silver jewelry for the brand, according to ceo Paul Blum.

“Silver is becoming more important,” said Blum, pointing to the firm’s blackened silver options with and without diamonds. “It works with the fashion now.”

“People are still buying gifts,” he said. “Those who are in the shopping lifestyle are still shopping. I am optimistic about the back half of this year. You’re seeing the seeds of recovery here with the retailers.”

Brands such as Henry Dunay and Mikimoto are focusing on the upper strata of the business. Dunay’s latest includes a $120,000 gold cuff with oversize Baroque pearl set atop.

Dunay, who has been designing for 52 years, said, “People are still buying big, but when times like this hit you think I’m in a bad position. I’ve got to lessen my inventory.”

Mikimoto sold a rare melo pearl at Baselworld, the Swiss trade show that took place in April. At Couture, the pearl jewelry brand offered a $1.6 million South Sea pearl necklace. A spokeswoman for the firm said clients are looking for incredibly rare and special pieces.

Judith Ripka offers a range of price points, but is prioritizing its Couture collection of special, limited edition gem-drenched pieces.

“Both our 18-karat Couture collection and sterling silver and 18-karat gold collections are on track, growing in sales and linear footage, maintaining our full-year forecast of continued double-digit growth in our retail and wholesale businesses,” said Ripka president Charles M. Jayson.

“The biggest challenge is to engage and educate the consumer,” said Moise Cohen, president of Marco Bicego.

Retailers are also hard at work drawing in crowds and getting the merchandise mix right for this trying market.

Ylang 23, based in Dallas, has enlarged its store by 40 percent to 1,127 square feet to accommodate its designer roster.

“We are very loyal to talent,” said co-owner Joanne Teichman.

Teichman said her brick-and-mortar store and Web business Ylang23.com are doing well, and that her clients are looking for one-of-a-kinds.

“My business is OK, my gross [margin] is down slightly, but my net is up,” said Rosenheim, who is planning several trunk shows this year. “We’re continuing to see consistent business on the bridal and fashion side.”

Saks Fifth Avenue was careful but calculated in its fine jewelry buy, sticking with brands that have a good track record with the retailer, according to Scott Erdman, vice president and divisional merchandise manager for jewelry and watches.

Jodi Kaplan, Bergdorf Goodman’s vice president and dmm for jewelry, said, “We are seeing a trend toward trading up across the board. In the designer world, we have worked with each line to make sure we have a strong offering in the $8,000 to $15,000 price range, which we see as an opportunity. Our strategy right now is to make sure we are in business at the right price level within each of our collections. For the most part, we are editing lower-priced items out of lines in order to hold additional units of higher-priced inventory, which is what our customers are responding to now.”

The high end is still selling well, but we’re in a difficult time,” said Marie Helene Morrow, owner of Reinhold in San Juan, Puerto Rico. “People are buying things they see value in and that’s brands. I like designers that speak a language. I’m building for the future.”