PARIS — Brick-and-mortar retail ain’t dead. That’s the message from Urban Outfitters, which today cuts the ribbon on its first French store. It’s based in a prime location, on Rue de Rivoli, opposite landmark Paris department store La Samaritaine, which is slated to reopen at the end of the year.

Alongside the chain’s own lines, “halo brands” including emerging names like Angel Chen and Gestuz intermingle with sportswear labels like Adidas, Levi’s, Kappa and Champion, which collaborated on an exclusive Reverse Weave clothing capsule in heavy-duty cotton for the Paris store.

“We’re growing at a rate of knots in Europe,” said Emma Wisden, managing director of Urban Outfitters Europe. The high-street fashion veteran, who joined the chain in May 2015, was previously global fashion director of Topshop.

Whereas Urban Outfitters’ North American remit is focused on digital growth, Europe, where the chain is underexposed, represents a “major opportunity” in terms of physical store openings, she said.

Urban Outfitters counts around 50 stores in Europe, as well as a handful of concessions, including at Galeries Lafayette Haussmann and BHV Marais in Paris. The chain entered Italy in December, with the opening of a store on Corso Vittorio Emanuele in Milan.

Its first store in Europe opened on London’s High Street Kensington in 1998, with the U.K. its biggest European market. The first store on the Continent outside of the U.K. and Ireland was Copenhagen in 2006.

Online sales account for around 20 percent of revenues in Europe, where it operates three web sites — in the U.K., France and Germany — and ships to 42 countries. The growth opportunity for e-commerce, said Wisden, “is infinite.”

In terms of physical stores, the retailer likes to scout buildings “that call out everything local,” she said.

“We don’t deliver everything in a flat-pack, every store is different. We are global, but we’re also very local in our approach.”

Urban Outfitters was founded in 1970 by Richard Hayne, Judy Wicks, his former wife, and college roommate Scott Belair, with Hayne still at the helm of the business. And what’s helped the brand stay relevant, said Wisden, is that it has always remained young at heart as a “student-oriented brand.” 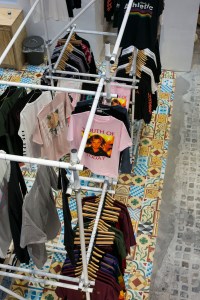 The chain’s target customer — in the 18- to 24-year-old age bracket — is “living the most exciting time of their life, experimenting and always on the hunt for new things, with this sense of optimism, and we try and reflect that in the shopping experience,” she added. “We’re interested in everything from an emerging, innovation point of view. The best ideas come from that [group].”

The chain’s young staff also feeds its success, she said. “We have a lot of creative people on the team and an open dialogue all the way through the chain. Ideas go back and forth from head office through to the stores and the visual merchandising teams.

“Shopping is a social experience and it’s not going to go away soon, so as long as we get the balance right….” added Wisden. With the retail scene gripped by a “sense of impending doom,” Urban Outfitters is bucking the trend, she said. “We seem to be in a luxurious position where we’re a hot brand, so we’re grabbing market share from lots of other places.”

The opening of the Paris unit follows Urban Outfitters entering the Italian market in December with a store in Milan.