Vacheron Constantin Has Time on Its Side

Vacheron Constantin is 250 years old, but it's proving to be as nimble as ever. 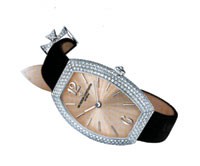 NEW YORK — Vacheron Constantin is 250 years old, but it’s proving to be as nimble as ever.

After throwing commemorative birthday parties in its hometown of Geneva, as well as in 17 other international cities, next Monday the watch brand will roll out the red carpet here at the New York Public Library for a soiree that is anticipated to draw hundreds of guests.

However, the objects on display are likely to be the true scene-stealers.

In addition to the debut of a Vacheron Constantin 44-carat diamond Lady Kalla wristwatch that Trump will wear, a display of women’s and men’s timepieces from the brand’s assortment and an exhibit of 32 historic objects, the house will present its collection of five commemorative timepieces that have pushed the limits of haute horology.

“The Tour de L’Ile was a top-secret project,” said Julien Tornare, president of Vacheron Constantin North America. “There was a secret cell of a couple of watchmakers working on the project. I knew they were working on something special for the anniversary, but even I had no information on what. They developed so many skills during the research and development of this watch, and we are going to use that savoir faire to develop new watches. We didn’t want to make huge fireworks this year and then stop developing complicated pieces for the future.”

The Tour de L’Ile would have been an unimaginable feat for Jean-Marc Vacheron, who was a 24-year-old watchmaker when he opened his workshop in the Saint-Gervais district of Geneva in 1755. The young “cabinotier,” as many watchmakers were then called because of the cabinet-like size of their workshops, grew successful in his day for pushing forward the art of watchmaking and passed on the trade to his heirs.

In 1819, François Constantin, a businessman, joined the workshop and began traveling the world to promote the brand, which took on its modern name, first becoming Vacheron et Constantin and eventually just Vacheron Constantin.

The company revolutionized watchmaking in 1839 when mechanical whiz Georges-Auguste Leschot was hired to oversee production and developed some of the first machine tools capable of making identical parts. The production and cost efficiencies that resulted were such that Vacheron Constantin quickly became a major supplier of components to other watchmakers and was able to become a superior start-to-finish manufacturer in its own right. The invention also earned the brand a mention in Karl Marx’s “Das Kapital.”

To mark its 200th anniversary, Vacheron Constantin pushed the limits again by becoming the creator of the world’s thinnest mechanical movement. The V.C. caliber 1003, as the company calls it, is 1.64 millimeters thick, and Vacheron Constantin remains the only company that can produce the item. It is featured in its current watch styles, such as the openwork gem-set Malte design for women.

“It is still the thinnest watch movement,” said Tornare. “Just to give you a little story about how hard it is to make these movements, there are only two watchmakers in the world who can regulate them. Last year, one of them broke his arm skiing. Half of the production could not be regulated. They are very difficult to achieve.”

Today, this conflict between the exclusivity of the product that is necessary to maintain its quality and catering to demand is one the brand struggles with as the luxury market continues to be bullish.

Last year, according to the Federation of the Swiss Watch Industry, Switzerland exported 25.1 million watches. Mechanical watch sales were up 12.4 percent. The U.S. represented the biggest market for growth, at 12.9 percent.

Compagnie Financière Richemont, which has owned Vacheron Constantin since 1996, as well as brands with substantial watch business that include Cartier, Montblanc, Jaeger-LeCoultre, Piaget and IWC, reported overall sales growth of 16 percent in the five-month period ended Aug. 31. The biggest growth area was watches, where sales rose 23 percent.

“There were 40 people working at Vacheron Constantin 15 years ago, and six years ago when I joined, there were 160,” said Tornare, who came on board in January 2000 as area manager in charge of Europe and Latin America, based at company headquarters. “Now, worldwide, we have 330 people and we are still looking to grow. The development of watches has been completely crazy. It gives me a positive feeling more than pressure. The watch business is in a positive trend. The U.S. is experiencing positive momentum and this is all resulting in a positive push behind the brand.”

To improve production capabilities, Vacheron Constantin opened a state-of-the-art manufacturing facility and headquarters on Sept. 7, 2004, designed by architect Bernard Tschumi in Plan-les-Ouates, near Geneva. It houses 170 employees. Vacheron Constantin is anticipating that number to grow to 250 in the near future.

In North America, Tornare’s efforts will be focused on analyzing its wholesale distribution. Although the brand has retail outlets in Geneva and Asia, here its distribution is wholly through wholesale at 52 doors in the U.S., such as Tourneau and Neiman Marcus, as well as independent jewelers, plus four doors in Canada.

“We want the brand to remain very selective,” said Tornare. “Vacheron Constantin only produces 16,000 timepieces yearly. We are a very limited, luxurious product.”

Andrew J. Block, senior vice president of Tourneau, said the client who is drawn to a Vacheron Constantin watch enjoys the exclusivity of owning one.

“The client is absolutely knowledgeable about the finer brands in the world of luxury and this is truly a luxury brand,” said Block. “They know its heritage, its quality and that they are going to own a watch that is made from start to finish by one manufacturer. I don’t know that Vacheron Constantin really wants to grow into a mass-merchandised brand. They may be able to add a few more pieces to their lines, but to stay exclusive, you can’t increase production and distribution.”

Roberto Chiappelloni, owner of Manfredi, an independent jeweler in Greenwich, Conn., that has been selling Vacheron Constantin for nearly two decades, said: “The person who wants a Vacheron watch is very often someone who has been successful, and this is one of the toys that they own and constantly talk about. They become aware of what a fine timepiece it is, that it has been worked on by hand and that it is something to be worn with pride.”