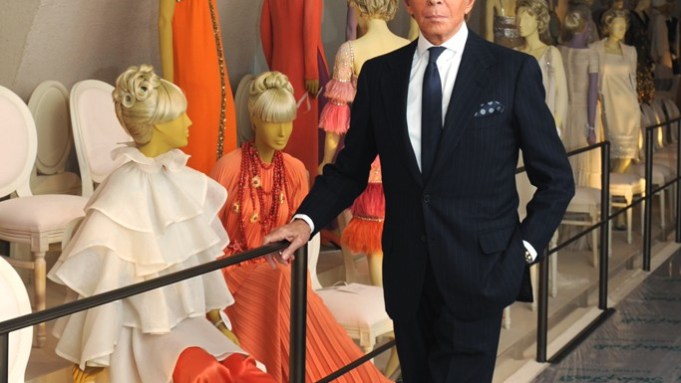 LONDON — Valentino Garavani may have turned 80 earlier this year, but the milestone hasn’t made a stitch of difference to the designer.

Years after his contemporaries have retired their boots and poles, he’s still skiing — at “my little chalet in Gstaad” — and said he’s barely stopped for breath since he sent out his final couture show in January 2008.

Retirement is a relative term for Valentino and his equally spry business partner and friend Giancarlo Giammetti, who has given over the sitting room of his grand offices on Cadogan Square for an interview. The two, who met in 1960 at Rome’s Café de Paris on Via  Vittorio Veneto, and founded the business shortly after, were famously the first designers to live as large as their clients — and they’re still at it.

It is a late fall afternoon, and Valentino — who’s dressed in a Richard James jacket, twill trousers, and with stacks of Shamballa beaded bracelets adorning his wrists — is sitting on a plump sofa as a fire pops and crackles nearby. “After so many decades…I still have the same enthusiasm, I still do everything as if I were involved with design, with fittings every day. I love this job, I did it all my life, and it’s going to die with me,” he said with a big laugh.

Valentino is rushing off soon — to London’s Somerset House — to help put the finishing touches on a retrospective of his work that opens to the public on Thursday, and runs through March 3. “Valentino: Master of Couture” will feature more than 130 handmade designs, including the pale ivory lace dress that Jacqueline Kennedy wore to marry Aristotle Onassis in 1968; the black velvet evening gown with white ribbons that Julia Roberts donned for the Academy Awards in 2001, and Princess Marie-Chantal’s wedding gown from 1995.

With a set designed by Patrick Kinmonth and Antonio Monfreda — who created Valentino’s 45th anniversary exhibition at the Ara Pacis Museum in Rome — the Somerset House show also includes a host of daywear looks, personal photographs and couture show invitations from the archives at Valentino’s 17th-century Château de Wideville, near Paris.

Valentino is enthusiastic about the upcoming show, and about how the designs — to his eye — have stood the test of time. “I was looking at some of the Sixties clothes, and some of them could have been made today. Looking at these clothes doesn’t take me back in time,” he said.

However, what has changed since the Sixties is the way women dress: “In the Sixties, women changed three times a day. Now, women with lots of money are working or involved with something — life has changed, and they dress differently. Right now, I think it’s better if a woman is wearing a beautiful pair of trousers with a shirt or sweater.”

Valentino recalled one of his most famous clients — Jackie. He remembered the list of all the wardrobe items — “all the little coats!” — she needed prior to her 1967 diplomatic trip to Cambodia, and the pride he felt when she chose his ivory lace dress for her marriage to Onassis.

“She had ordered her wardrobe from me in March of that year, and I knew that the wedding was close, but I didn’t ask her when she was getting married — it was too intimate a question to ask — and I didn’t know what she was going to wear,” he said.

“Jackie was so important in my life — she made me so well-known in the U.S. — and I have so many memories of her,” added Valentino, smiling as he recalled America’s former first lady inviting him to sit on the floor of her closet, and to help her sort through clothes. “She wanted to know what to give away and what to keep. We were there all afternoon,” he said.

Asked how he would dress another globe-trotting young woman — the Duchess of Cambridge — he said without hesitation: “I’d love to! She’d be so easy to dress, and she has a beautiful figure.”

Although Valentino has retired from the fashion house he founded in the early Sixties, he certainly hasn’t put away his pencils and sketch pads.

In September, the designer created costumes for the New York City Ballet’s annual fall gala — “I make them so that they move and feel like haute couture, and only with the top fabrics,” he said — and he also made Anne Hathaway’s pink and white wedding gown for her September nuptials.

In addition to designing, Valentino also has some very strong opinions about designers today — namely that they’ve lost a sense of aesthetics.

“Few people love and make beautiful clothes, clothes that are soft, smooth and elegant. And very few designers today design — it’s very important to be able to do your own sketch on paper and then explain [your vision] to the fabric cutters. Instead, lots of designers drape — it’s the new way,” he said.