Valentino: The Shape of Things to Come

Alessandra Facchinetti's insecurities and nervousness about her first couture collection for Valentino quickly abated when she began working with the seamstresses in the house's storied atelier. 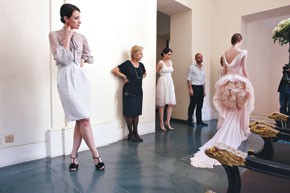 ROME — Alessandra Facchinetti’s insecurities and nervousness about her first couture collection for Valentino quickly abated when she began working with the seamstresses in the house’s storied atelier.

“Working with these ladies has been incredible. They gave me confidence through their expertise, passion and intelligence,” said the brunette Facchinetti, sitting in the retired designer’s former and untouched office at the house’s headquarters here. (For the record, the office of Giancarlo Giammetti, Valentino’s business partner, just opposite, remains vacant.)

The rarefied atmosphere that characterizes couture further helped Facchinetti maintain her composure. “For the first time in this business, I felt serene and calm, a bit like when you’re holding a newborn,” she smiled.

Once past the differences with ready-to-wear in terms of construction and which season is involved, Facchinetti set out in April to develop her 38 looks. “I guess creating a couture gown is a bit like having a child — they both grow day by day, step by step,” noted Facchinetti, her hair tightly pulled back in a bun to better display a pair of 18th century Indian earrings with diamonds.

When the designer teeters into the atelier where seamstresses in white lab coats work to painstakingly create the gowns, it’s evident the soft-spoken Facchinetti respects and reveres these workers and that she’s probably less intimidating than the house’s founder.

Convinced couture is intrinsic to the Valentino brand, Facchinetti’s goal is to attract younger customers, especially in an age when individuality, service and quality can elevate one brand above another.

“Couture is still a dream but a less theatrical one compared to the past, though it still maintains its luxe factor and exaggerated shapes,” she said. “Today it offers a sign of distinction that many are seeking and can be very modern if you think of Riccardo Tisci [at Givenchy], for example.”

In terms of fashion concepts, Facchinetti said she wanted to clean the slate and go back to the roots and heart of couture by focusing on shapes and workmanship. As her storyboard reveals, rather than focusing on a specific theme, Facchinetti mixes various periods, cultures and inspirations and, of course, iconic Valentino staples such as red, lavish embroidery and lace.

This story first appeared in the July 1, 2008 issue of WWD. Subscribe Today.

She said the study of shapes is the backbone of the collection with variations that span from organic to lean to sculptured with a three-dimensional effect.

The focal point can also be in the rear, an approach best displayed through a column dress whose bustle back with hand applications of roses and train counterbalance its plain front; a simple evening coat with ruffles that sinuously spill down the back, or a pencil skirt with rear cutaway movement.

“I wanted to work on those volumes that hopefully will identify my work in the future and that in many ways are very clean and modern for a stronger and decisive customer,” she said.

In terms of lace and embroidery, Facchinetti pulled out all the stops. Tulle bases were used as a canvas for the application of small woolly balls encircled by tiny burnished metal washers to confer a more futuristic air, while teeny metal discs frame tulle buds and beads on a double silk base.

“I know it can sound strange, but I never imagined [couture] could be so soothing,” she said. “And the more I think about it and work on this collection, the more this idea of fashion seems modern in its approach and meaning.”