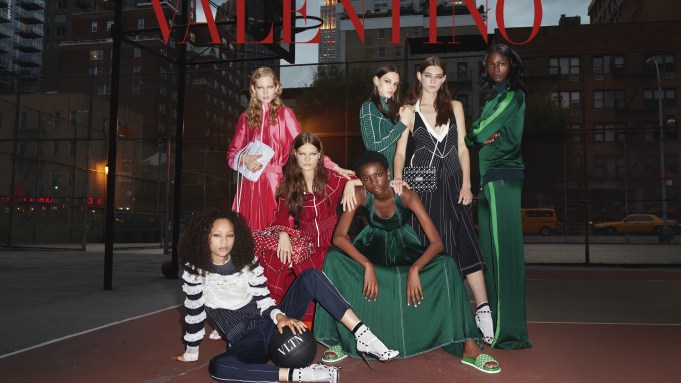 Valentino is making a major, out-of-the-box retail play for its resort 2018 collection. The athletic-inspired lineup that Pierpaolo Piccioli showed in New York in May will be sold in a series of pop-up stores in Tokyo, New York and Hong Kong, with the former two opening Oct. 26. The spaces are specifically designed with sport-inspired build-outs to match the collection’s theme, with interiors resembling chic, industrial gyms installed with reinforced concrete benches, basketball hoops and training box-jumps. Exclusive merchandise includes yoga mats, basketballs, caps, sneakers and tracksuits all done with a new logo VLTN, which Piccioli and his team cribbed from old Valentino logos from the Eighties and Nineties.

“The collection was about identity and pop and street culture that has become more influential and relevant,” Piccioli said. “I was thinking of how to present the collection, and I wanted to be more inclusive and more street in terms of culture and identity.” The New York store will be located at 121 Spring Street in SoHo and will be open through Nov. 26; Tokyo is located at QC CUBE 4-21-8 Jingumae in Shibuya-Ku and will stay open through Nov. 19. There will also be several pop-ups within multibrand stores, including Maxfield in Los Angeles and The Webster in Miami, and Valentino’s own flagship in Milan.

Piccioli’s thinking is that sports are democratic cultural forces that unite people across many backgrounds. “I wanted to keep the spirit of something that links different identities, different cultures,” he said. “You don’t care where you’re from or what you’re identity is. It’s something that brings people together.” To accompany the collection and pop-ups, Terry Richardson shot a campaign of models at dusk on a basketball court. Carmelo Anthony and Tori Bowie also appear in the campaign, which includes a video of Anthony playing basketball with the models. “It’s really authentic and the models are shot in this way that’s not proper,” Piccioli said. “Sometimes Valentino can be perfect. Sometimes you need imperfection to feel life and authenticity.” The campaign will appear not only in print magazines but also on wild postings and taxis, “so it’s less perfect and more alive,” he said. “I really wanted to get life and street into the perception of the Valentino world.”

Appealing to the personal, human side of his customers has been a huge focus for Piccioli, who framed a recent Rockstud Spike Bag campaign around the photo project “Humans of New York” founded by Brandon Stanton. Valentino epitomizes luxury in many ways, but Piccioli has also brought it down to earth by infusing elements of street into the collections. Employees at the pop-ups are encouraged to express their personal style instead of wearing uniforms. The only required attire is a white shirt from the Valentino Rockstud Untitled collection. Prices for the ready-to-wear and collection accessories remain on par with the upper echelons of designer luxury, but Piccioli included more democratic merchandise such as the yoga mats, priced at $95, basketballs for $145 and baseball caps for $345. The tracksuit is $1,900 for the jacket and $1,890 for the pants. Piccioli, who will be in Tokyo for the launch, tweaked his own image for the campaign with a new portrait shot by Japanese photographer Kenta Cobayashi. It’s a gritty black-and-white shot with a graffiti-like streak across it. “You’re not used to seeing Valentino like this,” Piccioli said. “But when you see it you will think it’s a new perspective on the same world of Valentino.”