Vanderbilt Vamps It Up

Gloria Vanderbilt's fall ad campaign features three supermodels and is meant to raise the profile of the moderate brand. 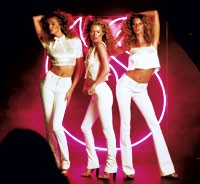 NEW YORK — On the surface, fashion shoots, with their cameras, sets and the preening of impracticably thin, superficially perfect models, are all about, well, surface.

Such was the case last month at the shoot for Gloria Vanderbilt’s fall consumer ad campaign, which features a trio of fashion’s “It’’ girls, who are so hot that they can get by with just their first names — Kate, Gisele and Daria.

Beneath the sleek exterior, though, the shoot was part of a larger drive by powerhouse vendors such as Jones Apparel Group to make “moderate” less synonymous with “boring” by improving styling and ramping up marketing.

“The main focus is to show our existing customer that we’re moving forward,” said Jack Gross, chief executive officer of Gloria Vanderbilt, a division of Jones.

The campaign is also an overture to customers in the 28- to 35-year-old range. That target is younger than the brand’s current customer, who has a median age of about 39.

In addition to attracting new customers, adding this marketing flash to the moderately priced Gloria Vanderbilt is a way of paying homage to the brand’s roots as a pioneer of designer denim in the Seventies. It takes a large, brand-oriented company to pay this kind of homage, though.

Jones declined to give specifics, but such a shoot with Kate Moss, Gisele Bündchen and Daria Werbowy — yes, they do have last names — can cost $300,000 once the models, photographers, stylists and location fees are paid.

The campaign, which will bow in September fashion magazines, is the brand’s first national ad push in recent years and is supported by an increased budget compared with a year earlier.

The expenditure, however, will help support the line in all its incarnations. Jones produces the brand’s jeans, tops, handbags and footwear, while outside licensees market swimwear, intimate apparel and watches.

“The moderate zone, you’re either big or you’re not in it,” Gross said. Gloria Vanderbilt’s annual wholesale volume is about $500 million.

The campaign will also soften the ground for the 2006 introduction of higher-priced Gloria Vanderbilt Couture jeans, retailing from $120 to $150-plus. “Sometimes where you start is where you finish,” Gross said.

For one day, the shoot overtook studios one and five at Pier 59 Studios, part of the Chelsea Piers complex in Manhattan, sandwiched between the Hudson River and the West Side Highway.

With high ceilings and white walls and sunlight from a southern exposure, studio five was used as a prep area where models and crew, when they weren’t occupied with preparing hair and makeup, lounged on a couple of black leather couches and picked at a buffet of clementines, fruit salad and other foods.

The models, dressed as casually as the crew members, stood out mostly for their slender frames and well-delineated facial features.

In some ways, the three “It’’ girls were prettier in that girl-next-door way, or maybe just less intimidating, before the stylists got to work — teasing and sculpting hair with hairspray and steaming curling irons.

Werbowy, in jeans and a T-shirt, had her makeup done as she sat, her long legs dangling from a folding table facing the windows. The result was dramatic, with deep emerald green eye makeup that was arresting in person, but intended for the camera.

At times, the models had a team of four perfecting their natural beauty: a manicurist, two hairstylists and one onlooker, ready like a surgeon’s assistant with just the right tool.

Running throughout the studio was Vida, Bündchen’s Yorkshire Terrier — a pink hair tie gathering the fur on her head into a ponytail.

When Moss arrived, protected from the wintry weather by a fur coat, she was greeted by Vida, who reared up on her hind legs and barked.

Studio one was the opposite of the prep area, all black and buzzing with energy while photographers Inez Van Lamsweerde and her husband, Vinoodh Matadin, worked with the camera, and a tailor and two seamstresses made last-minute alterations. A computer was hooked up to the digital camera to instantly proof shots.

Gathered in front of the hot pink neon swan (the brand’s well-known trademark), the three models struck a pose reminiscent of the one made famous by “Charlie’s Angels” in the Seventies.

A cadre of stylists made last-minute preparations and held light meters in front of the models’ faces and, once everyone cleared out of the way, one crew member waved smoke from a smoke machine toward the models with a piece of cardboard.

“It’s so sick,” said a member of the crew after looking at the shots on the computer. “It’s like the holy trinity.”

In fashion modeling, maybe. It takes more than just long legs to fill those jeans, though.

“It’s about the body language of the girls,” Van Lamsweerde said. “They all have the ability to project. They all know what it is to become someone [else] with hair and makeup. It’s ideal. I have to give very little direction and then they’ll take it.”

Jones’ senior vice president of marketing, Stacy Lastrina, who was ultimately running the show at the shoot, was aiming to freshen up the brand.

“My job is to keep the brand connected, relevant and evolved as brands are one of our most critical assets,” said Lastrina, who coordinates many of the firm’s branding efforts.

“Constant investment in a brand and maintaining its relevance is more cost effective than fixing a problem,” she said, espousing the penny of prevention is worth a pound of cure approach to branding. “Everyone needs a face-lift once in a while.”