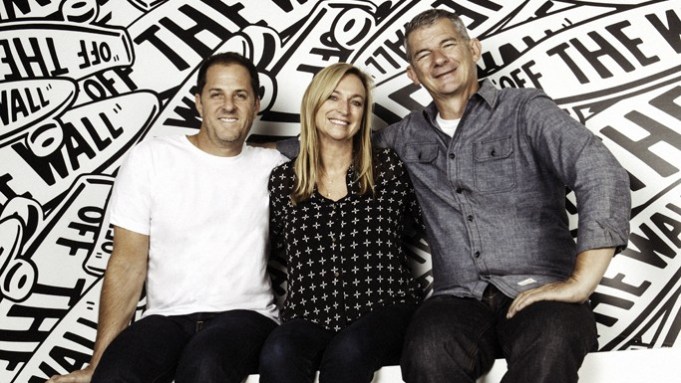 As VF sets an ambitious goal for Vans to reach $2.9 billion in sales within the next four years — a 70 percent spike from the $1.7 billion in sales it expects to make this year — the unit is relaunching its juniors apparel division as a young contemporary brand for next spring. Gone are the literal translations of its signature black-and-white checkerboard pattern from slip-on shoes to bikinis and jeans. Under the leadership of a new vice president of apparel, Vicki Redding, and an influx of new women’s designers and merchandisers, Vans is moving past its previous 14-year-old customer to an older crowd between the ages of 16 and 24.

To catch this coveted consumer, Vans needs to operate at a faster rate.

“We have to change the paradigm of how Vans handles the apparel business,” said Vans president Kevin Bailey, surrounded by the spring collection’s leopard-print harem pants, metallic-coated sweaters and laser-etched maroon jeans retailing for less than $100 at the brand’s offices in Cypress, Calif. “You have to respond to the market. Footwear is not competitive. It’s on an 18-month calendar. You can’t run apparel on that calendar and we were.”

After hiring Redding, who gained experience in retail and manufacturing at Nordstrom, Quiksilver and La Jolla Group, last December, Bailey called in Walter Wilhelm Associates as speed-to-market consultants. Vans cut three months off its previous 18-month design-to-delivery calendar, and Redding said she aims to shorten the schedule by an additional two months. It moved some production to Central America from Southeast Asia for swifter deliveries. It also introduced new categories like skirts and sweaters and added a summer lineup to supplement spring, fall and holiday deliveries. Marred by fit problems in the past, when customers bought jeans that were two sizes bigger, Vans employed a technical team to perfect the fit for every category.

“That’s a major focus for our relaunch: to get our fit right,” Redding said.

Another priority is to cater to retailers. Vans mandated that employees respond to retailers’ requests for reorders within 48 hours instead of the two weeks they used to take. In July, it began a “special markup” program to rush key pieces that correspond to hot trends. For the first time, it created capsule collections for retailers such as Pacific Sunwear of California, which will receive its first exclusive order in February.

Offering exclusives to retailers is “a reasonable strategy,” according to Dan Su, an equity analyst who covers VF at Morningstar in Chicago. “If you’re starting off small, to go exclusive with some retailers is the way to get on their shelves, especially if you’re targeting hard real estate at retailers,” she said. “That’s one way to get on their shelves and also build your own branding.”

Still, the international route could be the most viable option for Vans, Su said. Facing a crowded domestic market with competition from fast-fashion players, teen retailers and other young contemporary brands, Vans can seize bigger opportunities overseas, she said.

Certainly, Bailey confirmed that Asia is Vans’ fastest-growing market, expected to reach 25 percent of sales by 2017. Europe is projected to contribute 20 percent in the same period and the Americas regions, 10 percent. Redding and her team injected more color to appeal to Asian customers inspired by the happy hues worn by Harajuku girls.

“I wouldn’t be surprised if a lot of people look at Vans [here] and think it’s a shoe brand for guys,” Su said. “Internationally, I think there are more opportunities in new markets.”

To help change people’s perception of the brand, Vans is corralling “It” girls such as artist Langley Fox Hemingway, model Annabelle Dexter-Jones and actress Georgia Ford to appear in a video styled by “Spring Breakers” costume designer Heidi Bivens and directed by designer-turned-filmmaker Chrissie Miller. The company is hosting a premiere of the film, along with a presentation of the new spring collection, on Thursday at Space 545 in New York.

Vans still has a way to go with its women’s business, as well as apparel overall. Clothing made up 20 percent of Vans’ business last year. Of that share, women’s claimed only 20 percent. Bailey said the target is to double the apparel business by 2017.

“We want the apparel business to stand on its own,” he said.