FLORENCE — The saga of VBH sounds almost like a fairy tale, but instead of bad wolves and magic wands, the protagonist battles tough competition with python totes and alligator clutches.

A handsome American, who has been both a model and... 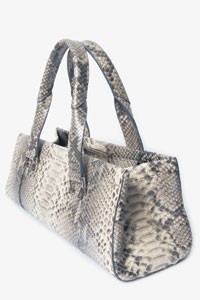 FLORENCE — The saga of VBH sounds almost like a fairy tale, but instead of bad wolves and magic wands, the protagonist battles tough competition with python totes and alligator clutches.

A handsome American, who has been both a model and executive vice president at Valentino and counts Gwyneth Paltrow and Jennifer Lopez among his friends, sets up his own accessories company and designs classic, stylish handbags in the most precious skins. In three years, he builds a $12.5 million business, sells to top department stores such as Saks Fifth Avenue and Neiman Marcus and opens a brand store-cum-art gallery on Madison Avenue in Manhattan.

VBH, launched by Verron Bruce Hoeksema for fall 2002 and named simply by his initials, has quickly carved its own niche.

“Bruce created a line of accessories of incredible quality, which stands out,” said Jeffrey Kalinsky, owner of Jeffrey Atlanta and Jeffrey New York. “You feel it when you hold a VBH bag. It’s something of substance and it feels expensive.”

“His aesthetic is modern, but Bruce does not chase the next hot bag, which only suggests that it necessarily won’t be hot one day,” he said. “VBH are the ultimate status bags.”

That was exactly Hoeksema’s intent.

“When I started out, I was set on designing evergreen classic models made with the most exclusive materials, not trendy throwaway fashion,” he said.

Hoeksema has been expanding the product offerings from the manila envelope clutch and other evening bags with which VBH first made a splash to a full-fledged collection of totes featuring the most exclusive crocodile, stingray or alligator hides.

“The quality is incredible and the skins show it took time to match them up, and the hides are used in the correct way, as part of the design,” said Debbie Greenberg, owner of Louis Boston, which also carries the line. She praised Hoeksema’s “extraordinary” sense of color.

“Picking color is an art form,” she said, and Hoeksema chooses “just the right” hues. Greenberg said Hoeksema “shows restraint” and “puts only what he needs,” in the bags, a plus in her opinion, as there are “too many overdesigned bags today, which don’t necessarily spell out quality.”

To ensure the best craftsmanship, the St. Louis-born Hoeksema, who lives in Rome, has rooted production of his bags in Pontassieve, Italy, a half-hour outside of Florence and known for its top-quality leather goods. Each bag is numbered and lined in suede or silk, and has rhodium or gold-plated sterling silver accessories. The structure of the bags is entirely made of leather, as Hoeksema proudly points out.

“Too often, you see bags whose structure is made of cardboard, not leather. These won’t last as long,” said Hoeksema, who also pays special attention to function, adding portable-phone pockets, satin jewelry pouches to store away valuables, strategically placed zippers and hidden magnetic closures to the bags.

Packaging is also a priority, with tobacco-brown cotton and leather shopping bags and boxes padded with satin cushions that are a gift in and of themselves.

Production is limited: VBH manufactures between 2,500 and 3,000 pieces a year.

Retail prices range from $500 for an evening clutch in satin to $25,000 for a large crocodile bag. The designer also has devised a discreet logo made of rectangular and oval symbols instead of the three VBH letters, in an effort to limit counterfeiting.

“It’s a separate level of registration,” he said.

The brand is available at 30 points of sale around the world, including Saks Fifth Avenue, Neiman Marcus, Bergdorf Goodman in New York, Wynn Las Vegas, Ikram in Chicago, Browns in London, Joyce and Isetan in Japan and Harvey Nichols in Hong Kong. The U.S. accounts for 70 percent of sales. The company, which posted a 60 percent growth in sales from 2004, plans to open a store in Rome in the fall.

“I’m looking at locations in London or Paris, where I’d like to open stores next,” Hoeksema said.

He also designs limited-edition jewelry, only available in the VBH New York store on Madison Avenue, a 10,000-square-foot space decorated by Peter Marino as an art collector’s private home. Every three months, Hoeksema stages art exhibits in the two-story boutique in a 1921 limestone building. Contemporary art, displayed with Hoeksema’s own private collection of paintings, is also for sale in the store.