Vegas Brands Home In on the Details for Spring 2019

Sustainability, genderless fashion, pastels, transparency and color pops were all big, with some brands charging ahead of the pack.

By Kari Hamanaka and Marcy Medina on August 21, 2018
View Slideshow 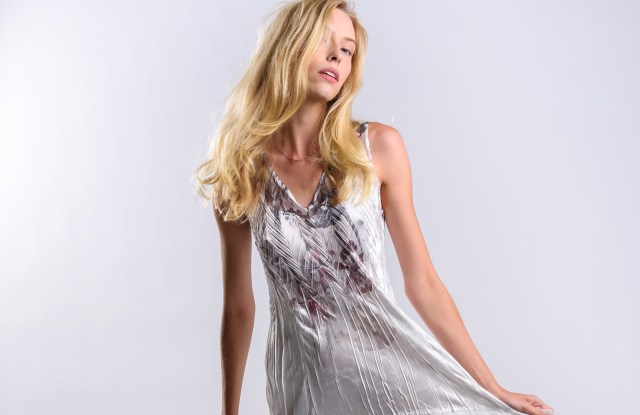 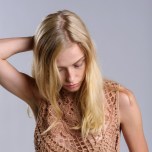 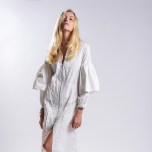 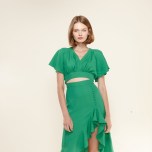 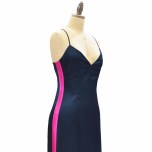 Updates on the tried and true was a big theme last week in Vegas. Women’s brands showing across the Las Vegas Convention Center, Sands Expo, Venetian Meetings and Mandalay Bay Convention Center may have played it a bit safe, but made bold statements via punchy colors and smaller details for retailers’ immediates and spring buys. Genderless fashion continued to gain steam as themes around sustainability, pastels, large plaids, transparency, shimmer, buttons and violet played on repeat across the trade show floors last week.

Here, a look at some of the brands that stood out at the Las Vegas trade shows.

Backstory: The 21-year-old line, founded by creative director Shelley Komarov, just hired a new head designer, Amanda Whipp, whose influence was seen in the Spring ’19 collection, which broke sales records for Stitch. The line is primarily sold in the U.S. and Canada.

Key Pieces: The bestselling print is Iris Garden, pictured here, and others with an ethereal or painterly quality had the strongest reaction this season. Abstract florals and soft florals were also very well received as a departure from more overt florals in the past.

Backstory: Rafael Lemos Design is produced by Natural Cotton Color, a company founded in 1995 by Francisca Vieira. It’s a newcomer to the U.S. market but better known in its native Brazil, where the agricultural company EMBRAPA has developed a naturally-colored seed that eliminates the need for chemical dyes, hence saving 70 percent of the water which would be used in the conventional production of cotton and jersey. The threads are woven into intricate crochet tops as well as simple tunics and soft knit pants.

“We’ve never been here,” said Catwalk to Sidewalk owner and chief executive Billy Kang of the line at the trade show. “We are just testing the current market to see how it goes. We wanted to test our new lines and we also want to see how the market has changed in the last five years.”

The line is an offshoot of the company’s long-standing Ro&De line, which is largely private label and caters to its department store customers, such as Nordstrom and Bloomingdale’s. Nürode aims to serve the young contemporary market with trendieer details and different fabrications across categories. The company’s parent also operates the Konus and Pleione lines.

Key Pieces: Shirts with intricate button details running down plackets or the sides in bright colors such as fuchsia and yellow were a big part of Nürode’s spring offering. Matching sets continue to be popular in a number of prints and large plaid patterns in pastels were used on tops and dresses. There was also a lavender midi dress with buttons running down the front.

Backstory: The brand has an interesting story having descended from the San Pedro Wholesale Mart in downtown Los Angeles, with roots as a fast fashion label. New ownership under chief executive Kathy Kim in the company several years back looked to tweak the business strategy with an emphasis on fast-forward pieces at the right price. A sister line Wild Honey was created to address the appetite that still existed from shoppers of the Mart, leaving room for Honey Punch to capture a new customer base, such as Topshop with its designs.

Key Pieces: Anything with punches of color did well among buyers. For spring, there is a navy slip dress with a hot pink stripe running down each side. Striping to add punches of color was also big piled on top of leopard and a camouflage print top.

Prices: The majority of the line is under $100 with the exception of outerwear or special pieces such as a snake print wrap dress. Bottoms typically start at $58, tops at $68 and dresses at $88.

Backstory: Safia Minney founded People Tree in 1991 with the desire to create a more thoughtful offering for the market. The line, based out of London, is focused on using sustainable or Fair Trade fabrics for a mix of breezy dresses and separates made from lightweight organic cotton and natural fabrics. People Tree mixed floral prints on dresses with ruffle detailing against a palette of pretty pastels and desert tones for spring.

The collections are designed by Tracy Mulligan who was tapped to the creative director role at People Tree in 2017. She oversees designs for a brand that has worked with Vivienne Westwood, Orla Kiely and Sandra Rhodes in the past, along with Emma Watson on the actress’ foray into fashion.

Key Pieces: Buyers seemed to be taken with the clay-hued overalls with button detailing at the straps and waist, especially when paired with a pale pink and white striped top. There were also drop waist dresses with ruffle hems and wide leg culotte pants.

Backstory: They call it circular fashion. Some call it sustainability or eco chic. Whatever the word, Atelier & Repairs has built a brand on the concept and in October celebrates three years in the business of repurposing apparel, with a specialty in denim.

“It was started as a way to reduce excess in the fashion industry because so much is produced every year that is never even used,” said global wholesale manager Kate Montana. “So the idea was not to produce anything new but to transform what already exists.”

That’s given way to a label producing hand crafted denim, shirts and jackets embellished with embroidery and patches. A basic pair of denim pants, repaired and redressed with new details can sometimes take as many as 23 hours of restoration.

The brand recently opened its first store in West Hollywood, which complements a shop-in-shop at Fred Segal’s Sunset Boulevard flagship.

“We wanted to open a shop that was personal,” Donadi said of the company’s first foray into standalone retail.

Key Pieces: What’s doing well right now are Atelier & Repairs “Camouflage on LSD” pants. The bottoms are repurposed military pants made bright and cheery with patchwork and neon buttons. “We demilitarize them. We want make sure they don’t go to war again,” Donadi said. There’s also the brand’s repurposing of Aikido and Kendo martial arts uniforms, purchased directly from Japan. The uniforms are anywhere from 40 to 60 years old, reworked with quilted pockets. There’s also a redone shirt with Western pockets, mandarin color and French mending technique. “We see the world without passports,” Donadi said of the shirt.

Backstory: The story behind Vancouver label Triarchy is pretty simple. The line was started by siblings Adam Taubenfligel, Ania Taubenfligel and Mark Taubenfligel with sustainability in mind.

The company works with a production facility in Mexico City, which uses 85 percent recycled water. All of the hardware comes from recycled metals, such as street signs or even paint cans, while labels are made from reclaimed water bottles. The white denim is bleached using ozone rather than chemicals and the company switched to a new denim fabric made from 35 percent recycled jeans. “Usually, with recycled denim, you don’t get this look that has the characteristic of vintage jeans,” Adam said, running his hands across samples of the fabrication. “This fabric is huge for us because I’m really limited with what we can make.”

“We did this jacket last season,” Adam said of the patchwork denim jacket. “I just didn’t want to get rid of the silhouette because sustainability’s our things and the pattern works so we started doing embellishments on it so we’re doing stuff like that on pieces that already do well for us.”

There’s also a new floor length fringe jacket, which takes the traditional fringe jacket — the fringe being made of deconstructed vintage — to a new level and retails for $999.

More recently, Triarchy introduced vintage T-shirts, but with a different approach to the idea by recycling the extra large vintage Ts not typically sold in shops and re-working them to new cropped fits.

“We’re doing basically the same as what we do with the jeans but with vintage T-shirts,” Adam said. “Our whole thing is we don’t want to use vintage that can be sold at a vintage store because it’s wasteful, so we’re getting the extra large T-shirts in vintage that generally don’t get resold and we use a new pattern and we’re doing crops.”

Backstory: The Italian sportswear firm doesn’t need much of an introduction with its well known logo of a man and woman sitting back-to-back in a nod to equality. The label’s growing women’s collection is something to note. The business is growing and so are the range of colorways and designs to coincide with demand.

Key Pieces: For spring, Kappa partnered with Disney on a unisex range — seizing on the genderless fashion trend that continues to gain steam — with pieces that included its staple hoodies and track pants. The brand’s well known logo is stamped everywhere, but the silhouettes are becoming more interesting: flared track pants and bell-shaped, three-quarter length sleeved and mock neck tops for women were particularly eye-catching for spring.

Prices: Shorts are around $90, logo shirts are $95, track pants and hoodies that are part of the brand’s limited, Premier collection are $120 and $135, respectively.

Backstory: Owner/founder/codesigner Nicole Salerno Conrad is based in Dallas while her longtime friend, creative director and codesigner Matthew Tomas Kerrigan is based in Chicago. Salerno Conrad is in charge of sourcing stones and gems such as druzy, labradorite and freshwater pearls, while Kerrigan is the metalworker, using 14k gold-filled or plated chains and nickel-free gold-filled wire for earrings.

Key Pieces: The Sun necklace shown here exemplifies their simple layering approach. “We are loving styles that make a great statement alone, but play friendly when layering up. Versatile pieces that will look amazing with your favorite jeans and tee and a little black dress – an easy transition from day to night,” said Kerrigan.

Backstory: Austin, TX-based founder and designer Natalie Tischler has an Art History Degree and lifetime fascination with jewelry and fashion. “I am really inspired by the boldness and fierceness of women in their daily lives and I want to create jewelry that helps them feel strong, confident and beautiful,” she said. She started the company in 2004 and has since sold to thousands of boutiques in the U.S., Canada and Japan as well as Anthropologie, Free People and catalogs including Arhaus and Soft Surroundings.

Key Pieces: Favorites from the newest collection include the Blue Ice Diamond Necklace shown here (featuring a blue diamond-shaped crystal suspended in a gold plated diamond and circle combination on a 32-inch gold-plated chain); the Yas Queen Necklace, a collar with gold plated loops that continue all the way around; and the Blue Circles Necklace, three gold plated circles with a hint of blue enamel on the inside.