Because of strong holiday sell-throughs, makers hope retailers will leave hefty orders for transition and fall during market. 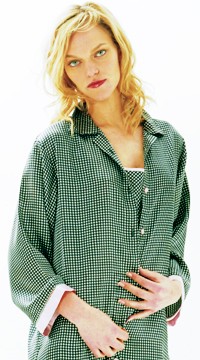 NEW YORK — The traditionally sleepy January market is about to get a wake-up call.

This year’s edition promises to be a far cry from what manufacturers generally call the “tin cup” market, where retailers barter for markdown money and the bulk of the action is generated by huge private label and branded warmwear programs.

Lingerie was a strong gift-giving category in December, and retailers generally said they were able to thin out bloated inventories which, in some cases, had prevented them from dedicating major open-to-buy dollars for fresh, new merchandise. Because of holiday sell-throughs 10 to 15 percent higher than a year ago, manufacturers hope retailers will demonstrate their largess with hefty orders for transition and fall, as well as immediate deliveries.

At-homewear, often regarded as a dark horse candidate in the intimate apparel arena, scored big during the holiday season, mainly because of a transition from casual fleece and sweats to dressier, more formal looks in fabrics such as velvet, velour, silk and Lycra spandex blended microfibers.

There also was no wane in the appetite for saucy little gift items like sexy lace and sheer bras and panties, garters and bustiers, a segment of the intimates business industry executives are describing as “extended comfortwear.” A key gift-giving item that is expected to continue gaining steam was the bowed or jeweled thong and G-string by brands such as La Perla Black Label, Aubade, Chantelle, Le Mystere and Lejaby, which feature mini bows, and novelty beaded or appliquéd embellishments in the shape of flowers, leaves and stars.

Jessica Mitchell, senior vice president of sales and brand development at Natori Co., said, “Our Christmas overall was very strong. The loungewear category was soft for fall, but it picked up dramatically. The dressier category performed well across the board in all the brands, Natori, Josie and Cruz. The robe category also was very strong.”

Assessing the market outlook, Mitchell said, “Retailers are coming off a very positive December. All of our major stores will be in. Retailers are looking for new items that will give their stores a point of differentiation. We also are planning to celebrate our new relationship with Dana-Co and Natori Black Label foundations with a party today.”

Barbara Lipton, vice president of merchandising and design for the licensed designer lines at Wacoal America, said: “This is an extremely important market for us because we’ll be showing all sleepwear, daywear and loungewear by DKNY Underwear and Donna Karan Intimates for fall ’04. We are showing it all at the same time so retailers can get a total overview of what their floors will look like.”

Lipton said DKNY Underwear will focus on the “interpretation of the ready-to-wear trend of tweed,” with layered, textured patterns like rib and lace-trimmed pointelles and corded laces that simulate lace, while Donna Karan Intimates will highlight “easy living looks” of Lycra velvets and velours and combinations of twill and satin.

“Our objective is to be proactive. We’ll be showing a new product called Perfectly Nude, a state-of-the-art line of microfiber and cotton and Lycra daywear, pants and bras that’s done in a new seamless way, not a laser cut,” said Kelly. “The look of it literally melts into the skin and you can’t even see the outline of these products under clothes. It’s done with silicone edges on the interior of the fabric that holds the product on the body.”

In warmwear, a number of companies are trying a new strategy of pushing shipments of heavier goods to early November instead of the traditional late August and September timetable. It’s a way of tapping into the consumer mind-set with buy-now merchandise on the selling floor, vendors said.

Carole Hochman, chairman and design director at Carole Hochman Designs, said the sleepwear company ships transitional goods August through October, but noted, “Our warmwear customer really starts to buy in November. She wants buy-now merchandise on the floor in August, September and October. So we’ll be shipping warmwear at the beginning of November.”

Hochman said another key change is the firm’s approach to quality versus price.

“I felt I had to be true to myself as a designer,” she said. “We’re making it work in the Oscar de la Renta and Carole Hochman brands with the quality of the fabrics and trims. If it feels and looks good, customers will buy it because they are getting more than they thought they would get.”

Among the new ideas in Oscar de la Renta sleepwear are pieces in luxe, textured cloqués, and a new micro satin in sleepwear by Carole Hochman that has a silk-like hand, she said.

Seth Morris, president of the Hochman firm, noted, “I think as a whole, retailers will come in with a better frame of mind because inventories are back in control. Because of that, there is liquidity at stores and more open-to-buy for fresh, new product. Several stores have even been calling for immediate goods. That’s a good sign.”

Marc Kimmelman, vice president of sales for the LAI Group division of Kellwood Co., said, “Compared to last year, we are seeing significantly less requests for markdown money. There are definitely leaner inventories, which is excellent timing for February deliveries. Aggressive retailers are doing at-once business.”

The new line will feature updated chenilles with allover embroideries, scallop edging, cording and bias-cut sleeve treatments. There also will be ruched velvets, tattersall effects and zippers that have a look of satin, he said.

Karen Neuburger, designer and an owner of KN Ltd., a sleepwear and home accessories company, said she will be showing more two- and three-piece looks, such as a boyfriend pajama story with a tank underneath.

“We keep hearing from younger and mature customers that they want the flexibility of having a sleeveless garment and something to throw over it for warmth,” she said. “We’re also doing a lot more vibrant color. One store will be featuring eight racks on the floor September through October to give customers a lot of different choices with colors like moss and coral, and blue or Kelly green with rose. New fabrics will include mini-rib and brushed-waffle pattern cotton knits.”

She said that one gift-with-purchase idea for Mother’s Day promotions has been well received: scrapbooks rendered in coordinating colors and prints of the Neuburger sleepwear line.

“The reason we’re doing it is customers tell us they often put together scrapbooks at pajama parties,” she added.