Vera Wang: Steady as She Grows

After 15 years of making wedding dresses, Vera Wang is branching into eveningwear, with a sales goal of $50 million in three years. 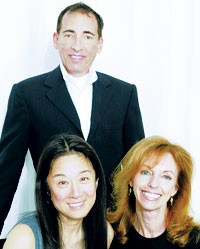 NEW YORK — Vera Wang is not one to be called rash. After 15 years of making wedding dresses — and doing the painstaking alterations that sometimes go with them — the designer is putting her know-how and seamstress skills into a more affordable dress collection.

The concept initially stemmed from the success of her bridesmaid dress business, and now she is banking on the 40 dresses to appeal to a broader age range — from sophisticated prom-goers to well-maintained 60-year-olds.

The line is to be produced under the Vera Wang label. It consists primarily of eveningwear, though it is priced considerably lower than her collection eveningwear, which retails from $2,000 to $5,000. With retail prices of $395 to $1,100, the new group intends to build business in specialty and department stores.

“The word is ‘attainable,’’ Wang said during a photo shoot last week at her West 39th Street showroom. “I’m not implying it’s cheap, cheap. But at least it’s something they can afford.”

The dress collection should generate $50 million in retail sales within the next three years, said Susan Sokol, president of Vera Wang Apparel.

A white matte jersey cocktail dress, a black halter dress with a sequined waistband and a strapless floral dress with banded tulle are among the styles. As a model breezed by in a floor-length black Chantilly lace dress with horizontal pleats at the bodice, Wang said, “This is our vocabulary — pleating, borders, banding. We’ve been very successful with these things. But by successful, I mean selling 25 pieces. Now we’ll be able to do this and reach more people.”

The company does not release sales figures, but industry sources said its wholesale bridal, bridesmaid, eveningwear and ready-to-wear generates $24 million in annual sales, and its Madison Avenue store rings up an additional $12 million in retail sales each year.

The dress collection comes at a time of change for the company. For the first time in 15 years, Wang and her right-hand man, Chet Hazzard, are not solely the one-two punch on the senior executive level. Sokol joined the company last month, and with her arrival Hazzard assumed the title of vice chairman and maintains his role as chief operating officer. Wang continues as chairman and chief executive officer, signing up Laura Lee Miller, the former Unilever Prestige president, as executive vice president of licensing for VEW Ltd., Wang’s licensing division. Hazzard and Wang said it also freed them to look at other opportunities.

“I love to hear you say that, because I work seven days a week,” Wang said, skeptically.

“It never gets easier — even with a great team,” Hazzard said.

Apparel sales are anticipated to rise 35 percent next year, and the company is expected to exceed $200 million in retail sales, partly because of its new dress business and its growing ready-to-wear. The company has ramped up its production team in order to handle the additional business.

Part of the executives’ increasingly busy days can be chalked up to a renewed interest in the brand, as well as its $140 million licensing business at retail. Bergdorf Goodman plans to open the designer’s first designated area on its third floor in November. Earlier this month, Wang’s 7th on Sixth runway show received enthusiastic reviews, and the designer collection will be available in 60 to 70 doors.

In terms of potential direction, handbags are “clearly an opportunity, and lingerie is absolutely on our chart,” as are accessories, Hazzard said. The company is considering doing accessories in-house. In the next year, bed and bath products such as sheets and towels will be added to the home collection. Sleepwear and shoes are also being considered.

“It may sound very last-minute, but it’s been a long time coming,” Wang said.

“Laborious,” Hazzard added, drawing out the syllables for effect.

Much of Wang’s licensed merchandise, such as china, glassware and silver, was inspired by the publication of her first book, “Vera Wang on Weddings,” in 2001. But Wang is quick to note it took years to develop each category, and slow and steady is the pace she prefers.

“I own my own business, so money is a concern,’’ she said. “I have to make decisions with Chet to be sure we have the right financing to do all this. That is a discipline I have had for 15 years.”